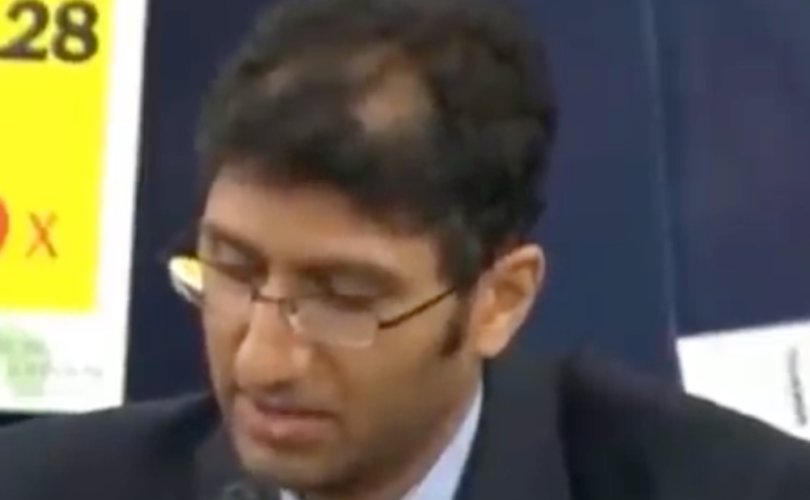 WASHINGTON, D.C  (LifeSiteNews) – A prominent drug safety expert has questioned the efficacy of the mRNA injections against COVID-19 and suggested they do not qualify as vaccines.

Dr. Peter Doshi, an associate professor of pharmaceutical health services research at the University of Maryland School of Pharmacy and associate editor of the British Medical Journal (BMJ), discussed the lack of scientific evidence for COVID vaccine efficacy at a panel about vaccine mandates and injuries. The round-table discussion was hosted by Wisconsin Senator Ron Johnson in Washington, D.C. on November 2. It  included medical experts and people who described their COVID jab injuries.

Doshi gave a 5-minute-long presentation in which he argued that recent data shows no evidence of efficient protection against COVID from the mRNA vaccines.

“The trials did not show a reduction in death even for COVID deaths as opposed to other causes,” he told the panel.

Doshi is known to have criticized COVID vaccine trials in the past and has also spoken against vaccination of children against COVID-19.

Doshi started his presentation with an appeal for more critical thinking within the medical and pharmaceutical industry.

“In pharmacy school, I teach a required course on how to critically appraise the medical literature,” he said.

“We train students on how to go beyond a study abstract and start to pick apart and critically assess biomedical studies, not just take them at face value,” he continued.

“I want to use my five minutes here to harness that spirit of critical thinking.”

Doshi said he was “saddened” by the “everybody knows” attitude that has become predominant in medicine, has “shut down intellectual curiosity,” and has led to “self-censorship.”

The professor proceeded to question the current mainstream narrative on COVID vaccines and the pandemic, backing up his statements with data from the vaccine trials, displayed on slides.

Doshi offered a list of “everybody knows” certainties and questioned each one, starting with the belief that the COVID-19 pandemic is currently prevalent among the unvaccinated.

“If hospitalizations and deaths were almost exclusively occurring in the unvaccinated, why would booster shots be necessary?” he asked.

“Or why would the statistics be so different in the U.K., where most COVID hospitalizations and deaths are among the fully vaccinated?” he added.

Doshi said that the apparent disconnect is something doctors should be “curious about.”

He then criticized the notion of “pandemic of the unvaccinated.”

“What does that even mean?” he asked.

Next on Doshi’s list of certainties which ought to be challenged based on scientific data was the certainty that “the COVID vaccines save lives.”

The professor referred to a February 2021 quote from the Journal of the American Medical Association (JAMA) in which doctors Fauci, Walke, and Walensky claimed that “clinical trials have shown the vaccines […] are highly effective against COVID-19 […] and death.”

Doshi argued that the statement is not backed up by current data.

“Today we have more data, and you can see that there were similar numbers of deaths in the vaccine and placebo groups,” he said.

“The trials did not show a reduction in death even for COVID deaths as opposed to other causes,” he concluded.

The drug safety expert then discussed the definitions of “anti-vaxxers” and “vaccines,” contained in the Merriam-Webster dictionary.

Today Merriam-Webster defines “anti-vaxxer” as “a person who opposes the use of vaccines or regulations mandating vaccination.”

Doshi said he was “stunned” by the second part of that definition, as many countries, including Japan and the United Kingdom, do not mandate childhood vaccines and still achieve high levels of vaccination.

“I would wager that a large majority minority, perhaps even a majority of the world’s population meets [this] definition of an anti-vaxxer,” he said.

The next definition Doshi addressed was the one for the word “vaccine.”

“I am one of the academics that argues that these MRA products, which everybody calls ‘vaccines’, are qualitatively different than standard vaccines,” he stated.

Doshi observed that the Merriam-Webster dictionary changed its definition of the word “vaccine” earlier this year. He then showed that mRNA products were not included in that definition until January 26, 2021.

“How would you feel about mandating COVID vaccines if we didn’t call them vaccines? What if these injections were called drugs instead?” asked Doshi.

“We have this drug, and we have evidence that it doesn’t prevent infection, nor does it stop viral transmission,” he continued.

“Would you take a dose of this drug every six months or so for possibly the rest of your life? If that’s what it took for the drug to stay effective. Would you not just take this drug yourself, but support regulations mandating that everybody else around you take this drug?”

Doshi concluded by renewal his appeal for more critical thinking within the medical and pharmaceutical industries.

“I think it’s time to inject some critical thinking into that conversation, and that is what I hope we’re doing today,” he said.