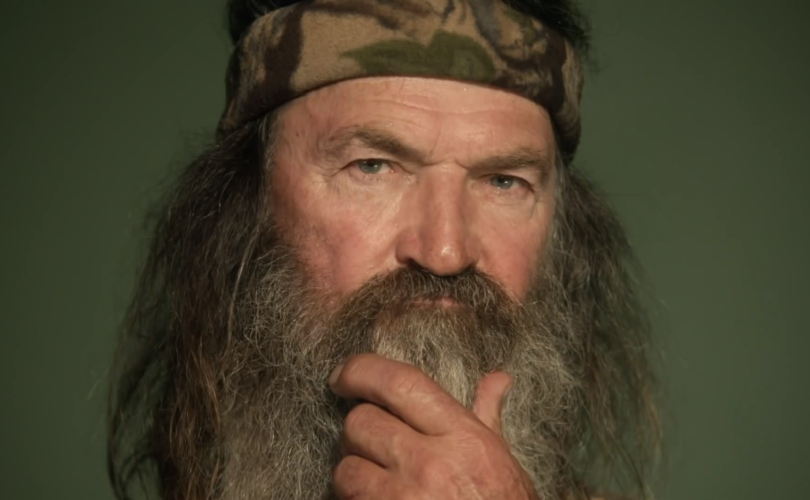 'Don’t ever say ‘yes’ to that. It’s terrible,' said Robertson.

Phil Robertson is known for not pulling any punches when it comes to expressing his opinions on controversial issues, and he certainly didn’t disappoint at the Outdoor Extravaganza in Louisiana earlier this month.

Speaking to a massive crowd of some 8,000 outdoors enthusiasts at the CenturyLink Center, Robertson blasted Christians for not getting active in the political sphere.

“There are about 90 to 100 million of us who claim Jesus. The problem is only half of you register to vote and out of the half of you that registers to vote, only half of that group actually goes and votes,” Robertson said, according to the ShrevePort Times.

“Therefore, when you’re looking up there and griping and complaining about what you see in Washington D.C., you might as well shut up,” he added. “The reason they’re there is we’re putting them there. If you don’t get anything else out of this, remember this — register to vote for crying out loud.”

But Robertson reserved his strongest remarks for politicians who support abortion.

“If the dude or woman is for ripping human fetuses out of their mother’s womb, don’t ever vote for that,” Robertson said bluntly. “Don’t ever say ‘yes’ to that. It’s terrible.”

Robertson also lamented the increasing secularization of the United States.

“Well, what you get is what is left up there. They’re ungodly. You agree?”

Ever since A&E’s Duck Dynasty became the most popular reality show in TV history, members of the Robertson family have earned a name as unapologetic defenders of traditional Christian values.

At the Outdoor Extravaganza, Phil was accompanied by his wife, Miss Kay, and eldest son Alan, who also addressed the crowds.

Phil’s blunt deliveries have occasionally landed him in hot water – most memorably when he addressed the topic of homosexuality in an interview with GQ magazine, earning him a short-lived suspension from his TV show by A&E.

But Robertson refused to apologize for the remarks despite intense pressure from homosexual activists and leftist groups.

“They railed against me for giving them the truth about their sins,” Robertson later said about the response to his GQ interview, pointing out that in the interview he had simply quoted Scriptural prohibitions against homosexuality and a variety of other sins.

“The news media didn't even know it was a verse,” Robertson said. “They thought I was just mouthing off.”