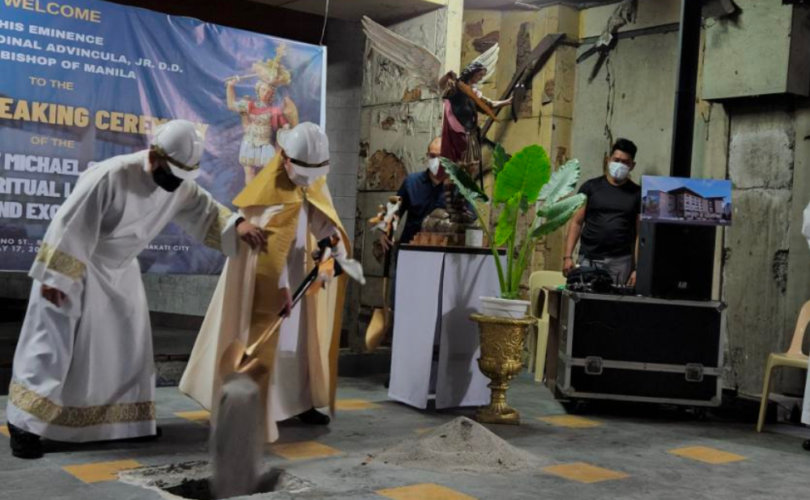 Cardinal Advincula leading the groundbreaking as he is assisted by Fr. SyquiaArchdiocese of Manila Office of Exorcism

MAKATI, Philippines (LifeSiteNews) – The Archdiocese of Manilla has begun construction on a large exorcism center, reportedly the first in Asia, as exorcists have revealed they now face ten cases needing exorcism every day.

On May 17, Cardinal Jose Advincula and Father Francisco Syquia, director of the Archdiocese of Manila’s Office on Exorcism, led the ground-breaking ceremony to begin construction of Saint Michael Center for Spiritual Liberation and Exorcism in Makati City.

“A product of more than 7 years of prayers, planning and fundraising, this religious structure will be the first of its kind in Asia, if not the world,” the archdiocese announced in a Facebook post.

Fr. Syquia said the center would “minister to those in bondage to the devil who are therefore the poorest of the poor and are usually overlooked.”

The new Saint Michael Center will be home to the Archdiocese of Manila Commission on Extraordinary Phenomena, the Ministry of Exorcism Office, and the Ministry on Visions and Phenomena Office. It will also serve as the headquarters of the Philippine Association of Catholic Exorcists (PACE), an association of exorcists founded in 2016 and now part of the Pontifical International Association of Exorcists based in Rome.

According to the archdiocese, the new center will strive to “encompasses not only diagnostic procedures and the prayer for spiritual liberation and exorcism itself, but must also include proper follow-ups and evaluations.”

The Archdiocese of Manila’s Office of Exorcism (AMOE) has existed for some years, being established in 2006 by Cardinal Gaudencio Rosales “in response to an emerging need of responding systematically and appropriately to people who are being harassed by unclean spirits.”

The office aims to “address the growing number of cases who need liberation from extraordinary demonic attacks and bondages.” The exorcist team on site includes priests trained as exorcists, along with counselors, psychiatrists, psychologists, case officers, and lay volunteers.

The program which the center will use includes “exorcism prayers, guidance and counseling, evangelization of the person and his family, introduction to a community where the energumen can find support and regular evaluation of progress in both his spiritual life and liberation.”

With the development of the new center, Fr. Syquia – who heads PACE – will now be looking to increase the number of exorcists in the country. Following a “dramatic” growth in exorcists since PACE’s inception, there are currently 171 exorcists in various diocese in the Philippines.

— Article continues below Petition —
Tell the Secretary of Defense: "Pride Month" is making our country weaker
Show Petition Text
10074 have signed the petition.
Let's get to 12500!
Thank you for signing this petition!
Add your signature:
Show Petition Text

Yet as PhilStar reported, PACE have stated that there are currently “ten daily recorded exorcism cases in the country,” a number which has increased due to COVID lockdowns. Increased time on the internet, including social media and pornography, has created new openings for demons to affect people, PACE stated.

Already in 2015, Fr. Syquia revealed a sharp increase in demonic possession, saying, “these days we have around 80 to 100 cases at any given time.” According to a report in the Catholic Herald, he explained in 2021 that, “a sharp increase in cases in the past three to five years” has led the diocese to build the center.

Experts have also revealed that COVID-19 lockdowns caused a spike in mental health emergencies across the world.

Speaking to Tucker Carlson recently, Father Vince Lampart, an exorcist for the Archdiocese of Indianapolis, stated that the devil typically attacks in four stages: first through deception, then division, followed by diversion – or attempts to substitute something for God – and finally discouragement or despair.

“The demonic can play on a person’s memory and imagination, because ultimately the devil will want us to make the same choice that he has made, namely the rejection of God. So, all these temptations are trying to challenge us to act contrary to God, to really disconnect ourselves from God,” he said.

He warned against participating in occult practices, including consulting mediums or psychics and using witchcraft, noting that it establishes a connection to “the demonic world” and inevitably results in diabolic attacks.