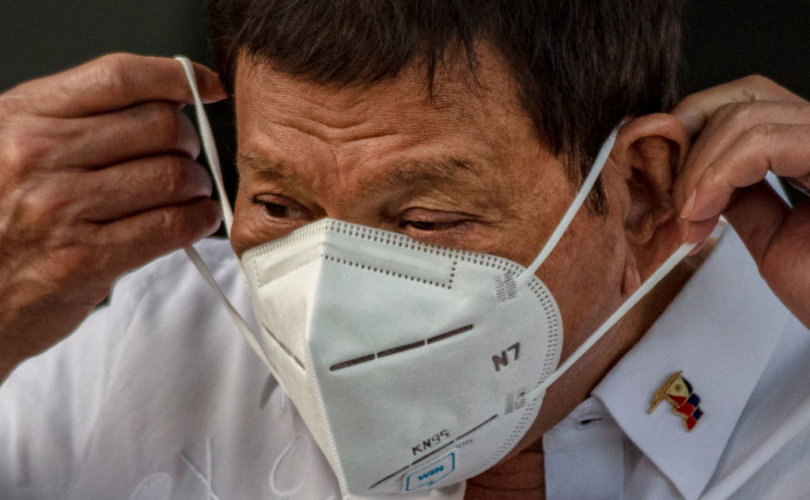 MANILA (LifeSiteNews) — Philippines President Rodrigo Duterte has ordered those who have not received a COVID-19 shot to be arrested if they leave their homes during a government-imposed quarantine.

On Tuesday, Duterte placed several regions within the archipelago nation under lockdown, implementing a specific quarantine order in the country’s capital, Manila, for those who have not received a COVID jab, according to a report in The Independent. The largely Catholic Philippines currently has one of the world’s lowest uptake rates for the abortion-tainted COVID shots. Around 52 percent of the country’s 110 million inhabitants opted not to take the jab.

In a televised announcement to citizens on January 6, the president said he is “appalled” that so many Filipinos have thus far decided against inoculation and threatened un-jabbed citizens with arrest should they leave their homes while a stay-at-home order is in place.

The order prohibits un-jabbed residents from leaving their homes unless for “essential reasons,” such as purchasing groceries, or exercising.

“Being the President,” the 76-year-old politician said, “ultimately, I am responsible for the safety and well-being of every Filipino and that is why my orders are to restrain them.”

He then claimed that citizens who refuse to take the shot “put everybody in jeopardy” and allow the virus to go “galloping in our community, in our country, and in the world.”

“Because it’s a national emergency, it is my position that we can restrain people who have not got their shots,” the president blasted. “Look for those persons who are not vaccinated and just request them or order them, if you may, to stay put,” he instructed local authorities.

“If he refuses, if he goes out his house and goes around the community, he can be restrained. If he refuses, the captain is empowered now to arrest recalcitrant persons,” he declared.

The move marks the return of a similar policy implemented by the president in July last year, whereby the un-jabbed were forced to remain in their homes and the police used to bring them back if they were caught breaking the order. Earlier in the year Duterte also threatened citizens who refused the COVID jabs with being thrown in “filthy and foul-smelling” jails.

On January 12, Duterte’s government updated its orders restraining inhabitants of Manila and the surrounding regions who haven’t received the jab, banning them from using public transportation.

Transport Secretary Arthur Tugade introduced a “no vaccination, no ride” policy on Wednesday, prohibiting those who are not jabbed against COVID-19 among Manila’s 13 million residents from using “all domestic travel to, from, and within NCR [National Capital Region] via public transportation by land, rail, sea, and air.” This new order will replace current segregation rules forcing the un-jabbed to take special buses, for instance, instead of using the most convenient transport service.

The order stated that “operators of public transportation shall allow access or issue tickets only to ‘fully vaccinated persons’ as evidenced by a physical or digital copy of an LGU (local government unit)-issued vaccine card, or any IATF-prescribed [Inter Agency Task Force] document, with a valid government-issued ID with picture and address.”

“This [order] shall cover public transportation for individuals who reside outside NCR but who work and/or travel to the same,” the edict added.

A “fully vaccinated” individual is one who has received two doses of a COVID shot, or one of a single-dose regimen, and at least two weeks have passed since taking the last dose, according to the order.

“Any violation of this [order] by operators of public transportation shall be considered a violation of applicable general safety and health provisions under any concession or service agreements, authority or permit to operate, or other similar instruments,” the order reads.

Exemptions to the order exist for those unable to receive a COVID jab for medical reasons, though they are required to present a signed medical certificate with the details of the physician who granted the exemption in order to access public transport.

The order informs that “[a]ny violation of this DO [department order] shall be penalized in accordance with the respective charters, authority, rules and regulations of the concerned attached agencies and sectoral offices of the DOTr [Department of Transport].”

At a press briefing Wednesday, Transportation Undersecretary Artemio Tuazon Jr. remarked that the government is “not limiting” the right of the un-jabbed to transportation, explaining that “they will not be able to use public transportation. They have other means of transportation.”

Aspiring Filipino presidential candidate Leody de Guzman, known for his activism in the labor rights movement, heavily criticized the administration’s new orders as an “explicit coercion of the masses.”