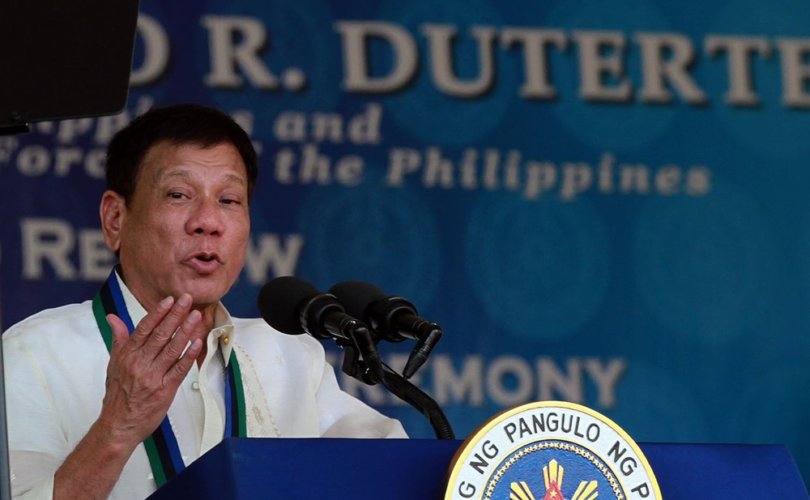 MANILA, Philippines, July 30, 2021 (LifeSiteNews) — Philippines President Rodrigo Duterte told those who have not received the COVID-19 injections, “don’t go out of your home,” warning that he will order the police to return people to their homes if they venture out.

Duterte made the comments during his weekly “Talk to the People” program Wednesday. Taking aim at the unvaccinated, Duterte described people who had not taken the injection as “walking spreaders” of COVID-19.

“Those who don’t want to get vaccinated, I’m telling you, don’t go out of your homes,” he declared.

The president blamed the continued presence of COVID-19 on unvaccinated individuals: “This will not end if I continue to tolerate you. Don’t go crying about this because this is a different story. We are talking about our nation. If you do not want to help by getting vaccinated, then don’t go out of your house.”

Duterte called on local law enforcement officials to enforce his televised directives, despite his proclamations not being supported by any laws. The police would have to “go around to see who [is] vaccinated and not,” he stated.

The 76-year-old politician decried the fact that there was no law which he could use in order to legally persecute someone who “has not been vaccinated and [is] going around.” “We have to come up with a law punishing a guy,” he stated.

Duterte granted certain freedoms to those who had received the injection, stating that they can “start traveling” around for “strolls.” “What’s the purpose of having a vaccine if you cannot go out?” he asked.

— Article continues below Petition —
PETITION: Support Texas Dad risking everything to save his son from being "transitioned" into a girl
Show Petition Text
9803 have signed the petition.
Let's get to 10000!
Thank you for signing this petition!
Add your signature:
Show Petition Text

The president’s most shocking comment came at the end of the video clip provided by the Associated Press: “Those who do not want it [the vaccine], well for all I care, you can die anytime.”

Following the consternation caused by Duterte’s comments, his spokesman Harry Roque attempted to “clarify” the comments, claiming that they were not as onerous as they sounded.

“I think the President was thinking how to keep the economy going if there will be a need for a lockdown. In which, it will not be a complete lockdown since the vaccinated may still be allowed to work,” Roque said.

Roque appeared to side with Duterte’s theme, suggesting that the president’s orders might well be enforced once more people are injected. “Let’s just say that as we are able to vaccinate more and more of our people, we’re headed toward that direction,” Roque revealed.

In comments made to Rappler.com, the National Union of Peoples’ Lawyers (NUPL) president and human rights lawyer Edre Olalia said that some restrictions on movement “may be acceptable only if it is pursuant to a reasonable and proportionate regulation in the interest of public health. But the restriction must not amount to actual prohibition especially under pain of punishment.”

Olalia described Duterte’s threat as “another jab at liberties.”

Indeed, it was only weeks earlier that Duterte threatened to send people to jail if they refuse to take the COVID-19 injection. “You choose,” he said in a televised address. “Vaccine, or I will have you jailed.”

“I’m telling you, those police jail cells are filthy and foul-smelling, police are lazy in cleaning. That is where you’ll be,” threatened Duterte. “You get vaccinated, otherwise I will order all the village heads to have a tally of the people who refuse to be vaccinated.”

Olalia spoke to the New York Times about the president’s comments, noting that there was “no law that specifically empowers the president to order such arrests for said reasons, even if this is a health emergency.”

The president has a long track record of making extreme threats. Last year he threatened to jail anybody not wearing a mask and even suggested that those disobeying lockdown rules might be shot. Despite high compliance with mask and lockdown requirements in the country, Duterte’s militarized approach to suppressing movement and enforcing COVID-19 protocols led to the arrests of over 76,000 people by as early as July 2020.

Duterte’s most recent comments come just days after the mayor of the City of Lapu-Lapu issued his own directives discriminating against the unvaccinated.

Mayor Junard Chan issued his executive order No. 2021 – 040 on Monday, July 26, which stated that as of August 25, those who are unvaccinated will be barred from entering supermarkets, groceries, department stores, and convenience stores.

“Effective August 25, 2021, only vaccinated persons, upon presentation of their vaccination cards, shall be allowed to enter public and private markets including department stores, supermarkets, grocery stores and convenience stores,” read Section 4 of the document.

Chan also faced immediate public backlash, prompting him to declare on Wednesday that his threat might not come into force provided that the sudden uptake in the experimental injections seen after his order, continued unabated. No firm promises were made by the mayor.

Official data from the Philippines Department of Health indicates that 1,580,824 people in total have contracted the virus since its emergence early last year, with 61,920 “active cases.” So far 1,491,182 people have recovered, while 27,722 are said to have died with the virus.

The rollout of the experimental injection in the country is still focused on priority groups, including frontline workers, the elderly, and those with underlying illnesses.

According to data updated daily by the New York Times, 11% of the over 111 million strong population has received a dose of the injection, while 7.2% have received two doses.

Currently, the Philippines’ Department of Health writes that the experimental injections are not mandatory: “But the government highly encourages the public to get vaccinated and be protected against preventable disease.”

Meanwhile, the number of injuries and deaths following the experimental COVID-19 injections continues to grow in the U.S. and other countries. According to official data from July 23, between December 14, 2020, and July 16, 2021, a total of 491,218 total adverse events were reported to VAERS, including 11,405 deaths and 48,385 serious injuries.

Among the 12–17-year-old age group, there were 12 reported deaths, of which two were suicides, 14,494 total adverse events, including 871 rated as serious.

Duterte himself was raised as a Roman Catholic, but in 2016 stated that though he believed in God, “I do not believe in religion, period.”

Some time later, Duterte stated, “I believe in one god Allah. Period.” This was supported by a 2019 statement in which he said, “There is a part of me which is Islam actually.”

In 2016 he declared that he would implement a policy of population control, attacking large families with multiple children: “Three’s enough.” Reports noted that as mayor of Davao City, an office which he held for 22 years between 1988 and 2016, he had strongly promoted birth control and reportedly paid men to undergo sterilization procedures.