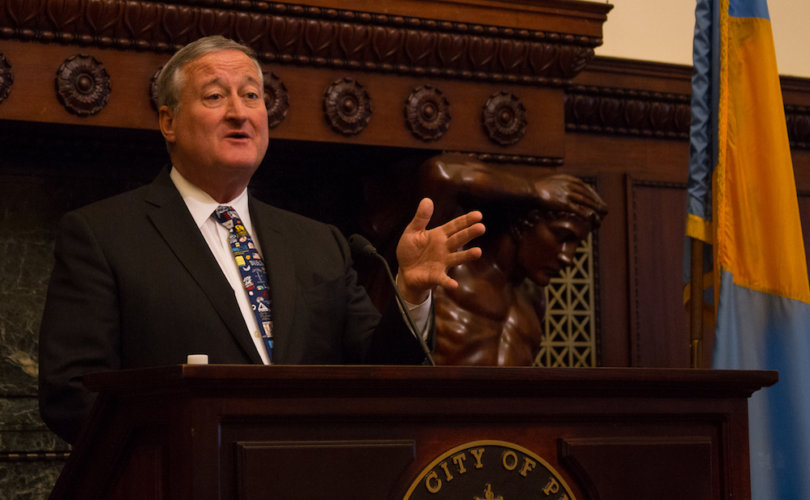 PHILADELPHIA, Pennsylvania, July 7, 2016 (LifeSiteNews) – The Catholic mayor of Philadelphia blasted his ordinary, Archbishop Charles Chaput, for his comments affirming Catholic doctrine that the divorced and civilly remarried and those with same-sex attractions must live chastely in order to receive Holy Communion.

Jesus gave us gift of Holy Communion because he so loved us. All of us. Chaput's actions are not Christian. https://t.co/FXfC858EP6

His tweet was in response to LGBT activist Ben Secka, who asked for Kenney’s thoughts on the matter.

Chaput recently released diocesan guidelines for the implementation of Pope Francis’ exhortation Amoris Laetitia. In these guidelines, Chaput wrote that the exhortation must be understood in continuity with the Church’s teaching. The guidelines affirm the Church’s longstanding practice of allowing the divorced and civilly remarried whose previous marriages have not been declared null to receive Holy Communion only if they are living without sexual activity, and in such a way that it will not cause scandal.

Chaput also wrote that unmarried cohabitating couples must cease sexual intimacy until they are married in the Church, and separate where it would not present an undue burden. Same-sex couples in open and active sexual relationships also may not receive Communion.

And Catholics who are ‘remarried’ or in same-sex relationships may not hold parish responsibilities or participate in liturgical ministries or functions, Chaput stated.

“Two persons in an active, public same-sex relationship, no matter how sincere, offer a serious counter-witness to Catholic belief, which can only produce moral confusion in the community,” he wrote.

Chaput’s guidelines urge priests to offer authentic, charitable pastoral care to those with same-sex attraction and acknowledge that some with such inclinations live chastely according to the Church’s teachings and thus are disposed to receive Holy Communion.

This is not the first time Kenney has lashed out against the Catholic Church. Before the 2015 World Meeting of Families, Kenney wrote in an op-ed published in Philadelphia Gay News that the city’s residents should take advantage of the Pope’s visit to promote the LGBT cause and opposition to Catholic doctrine on homosexuality.

“As a lifelong Catholic, I am furious at my Church” for not giving gays a platform at the World Meeting of Families, he wrote.

Secka tweeted encouraging Pennsylvania state legislator Brian Sims to give the Archdiocese of Philadelphia “hell” for taking “yet another step backwards”:

Archdiocese of Philadelphia takes yet another step backwards and proudly announces further exclusion of LGBT. Give em hell @BrianSimsPA

Canadian Bishop Scott McCaig responded to Kenney.  “Jesus was not a relativist,” he wrote.

@JimFKenney @BSecka “If you love me you will keep my commandments” John 14:15. Jesus was not a relativist.

Mollie Hemingway, a senior editor at The Federalist, said it was “scary” to hear a government official speak against a Christian leader this way:

But Secka thanked the mayor for criticizing the Archbishop:

Thank you @JimFKenney for being a leader & taking a stand. Happy to have you representing Philadelphia, your hard work does not go unnoticed