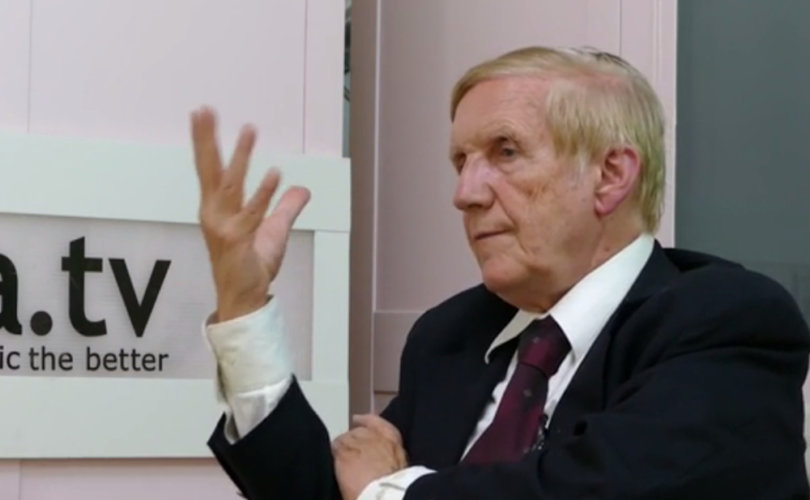 October 6, 2017 (LifeSiteNews) – There’s a “topsy-turvy Inquisition” happening in the Church right now, according a world-renowned philosopher fired by his archbishop for questioning the Pope’s teaching in Amoris Laetitia. This “Inquisition” is targeting and persecuting orthodox Catholics, he wrote, for failing to affirm the “situation ethics” that the Church has always condemned.

The man who wrote this is Dr. Josef Seifert, who was a close friend of Pope St. John Paul II.

This fall, Archbishop Javier Martínez Fernández fired Seifert from the International Academy of Philosophy in Granada after Seifert published an article calling Amoris Laetitia a “theological atomic bomb” because it suggests God can will people to commit intrinsically evil acts, and thus undermines all of Catholic moral teaching.

Seifert is taking legal and ecclesiastical action against Fernández. He explained in First Things that he’s doing this in a fraternal way for the good of the Church, not out of malice.

“I have tried, and will continue to try, to propose a conciliatory and peaceful settlement before the peace Court in Granada, but not at the price of truth and of justice,” Seifert wrote.

Seifert has previously said he will defend Catholic teaching and speak out against harmful ambiguity “even if I am murdered for it.”

Seifert began his explanation of the “Inquisition” against faithful Catholics today by noting that throughout history, clergy and even popes have defied Catholic teaching with their actions. Many within the Church have opposed Catholic teaching, and the fact that the Church has been able to survive these crises and retain its perennial teaching shows it’s a divine institution run by men, he wrote.

“In the last 50 years, the crisis that threatened the Church most gravely is one of moral theology and of the understanding of ‘natural law,’” Seifert warned.

This crisis began with some in the Church arguing for “conscience” to allow people to personally reject Humanae Vitae’s prohibition on artificial contraception.

“Yet the moral-theological phalanx that turned against Humanae Vitae was not content with saying that the ethical errors and gravely disordered acts of those who practice contraception are purely subjectively justified by their erring conscience,” Seifert wrote. “Instead, these opponents suddenly wanted to claim the full objectivity of their opposition to Humanae Vitae, saying that we do not deal here only with erring consciences.”

Seifert noted this is something “tirelessly invoked by Rocco Buttiglione in his defense of Amoris Laetitia.”

“Defenses of the subjectivity of conscience still implied that the sinner, who found himself entangled in errors of conscience, should be better taught and humbly submit his judgment to the objective truth about the intrinsic wrongness of his acts,” Seifert explained.

So dissident theologians began to claim “under many circumstances the acts Humanae Vitae called intrinsically wrong are, objectively speaking, not wrong at all.”

They argued that people practicing artificial contraception could actually be “objectively right when they chose to do so.”

This sort of ends justify the means reasoning judged acts by their good or bad outcomes rather than their inherent nature.

“We can easily see that with this ethics nothing in Catholic moral teaching would remain intact,” wrote Seifert. “Because no act would be bad by its nature, but good or bad only with reference to the concrete complexity of life and the web of causes and effects.”

In Veritatis Splendor, the sainted pope affirmed “with utmost force that there are acts that are by their nature evil and morally wrong.”

“Today, the ethics rejected by Veritatis Splendor has raised its ugly head once again,” Seifert wrote. “It threatens to bring about the climax of the moral-theological crisis in the Church, because now it is not just a mob of some rebellious theologians and bishops who deny intrinsically evil acts.”

“No, there are some formulations in Amoris Laetitia that have caused a deep shock in those of us who have fought, alongside John Paul and Pope Emeritus Benedict XVI, for decades against the immense evil of this false ethics,” Seifert warned.

This is consistent with what Seifert has said before of Amoris Laetitia's problematic sections. The pope suggests “that we can know with ‘a certain moral security’ that God himself asks us to continue to commit intrinsically wrong acts, such as adultery or active homosexuality,” Seifert wrote in his now-famous “atomic bomb” critique.

It is these “formulations” that caused four cardinals to send Pope Francis a dubia, or formal request, for clarity about the controversial exhortation, Seifert wrote.

The dubia “are in no way anti-pope or damaging to the community of the Church, but represent a supreme service to the Church and to the pope, by pointing out a threat of destruction of Catholic moral teaching if Pope Francis does not clarify things or correct some assertions he made,” he explained.

“They are questions that should be asked by all cardinals and bishops, and by all laymen across the world,” but the few asking are being persecuted for doing so.

Seifert pointed to the former Prefect of the Congregation for the Doctrine of Faith, Cardinal Gerhard Müller, being forbidden by the archbishop of Madrid from presenting a book that interpreted Amoris Laetitia through the lens of Familiaris Consortio.

“Was not the removal of Cardinal (Raymond) Burke from the second part of the Synod on the family and from all his high posts in the Curia a kind of inquisition in response to his questions, which have not been answered but punished?” asked Seifert. “Is not the same assumption necessary to explain Cardinal Müller’s abrupt removal as Prefect of the Congregation of Faith?”

“The moral-theological crisis has moved from the bottom to the top of the Church,” he continued. “The victims of judgments or actions against them are denied the opportunity to defend themselves against unjust charges, a natural human right that is explicitly recognized in canon law.”

“That the archbishop (of Granada) does not remove Catholic theologians who spread errors and heresies while teaching in the name of the Catholic Church, but instead expels me from a chair he had created in a non-Church-affiliated school of philosophy, is beyond my comprehension,” he wrote.

“Such a persecution of someone who defends teachings that are entirely compatible with the Catholic Church is harmful not only for me, but for the archbishop himself and for the Church itself.”

Thus, I repeat again my plea to Pope Francis to answer the question put to him, and to answer unambiguously, with a simple Yes or No. If he answers that one of his affirmations has the logical consequence of denying intrinsically wrong acts and runs counter to the constant teaching of the Church, I implore him, in the name of God, Who Is THE TRUTH, to retract any affirmation that is counter to the truth and Church Teaching.

I do not act this way because I believe myself, in insane pride, to be more infallible than the pope. Rather, I do this because I profess a faith whose Scriptures teach us that sometimes a donkey can see something the prophet fails to see. If the prophet in such a case slaps the donkey, whom God sent him, he will receive the stern reprimand God gave the prophet through his angel.