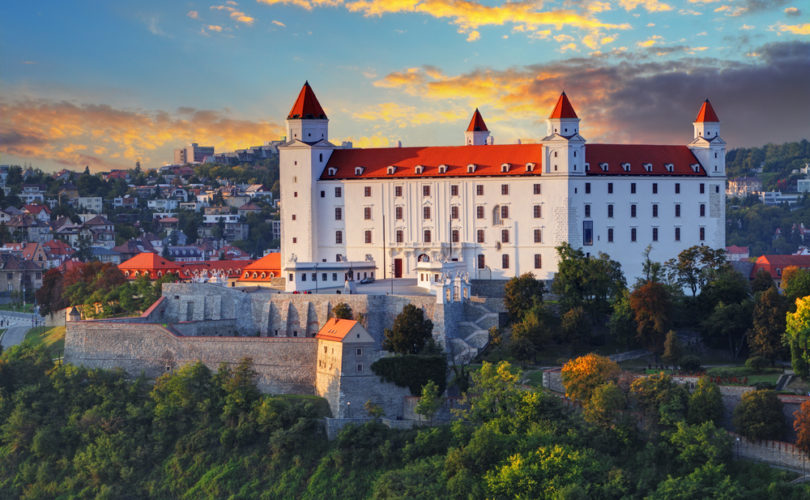 Bratislava Castle, one of the city's defining cultural landmarksShutterstock.com

October 16, 2017 (LifeSiteNews) – European conservative scholars and intellectuals have released a manifesto aimed at restoring Europe to its “true genius” and actively recovering “what is best in our tradition.”

The manifesto, called the Paris Statement, details how “technocratic tyranny” and “false freedom” prevails in Europe, threatening its very existence as well as the Christian roots that undergird it.

The statement, released October 7, lists concerns about the growing secularization of Europe, Muslim immigration, and the rise of a “false Europe.” It outlines ways Europe can return to respecting the sovereignty of its nations, overcome “isolation and aimlessness,” and restore “true liberalism.”

“The true Europe is at risk because of the suffocating grip that the false Europe has over our imaginations,” it says. “Our nations and shared culture are being hollowed out by illusions and self-deceptions about what Europe is and should be. We pledge to resist this threat to our future. We will defend, sustain and champion the real Europe, the Europe to which we all in truth belong,” the authors state.

These false ideas about Europe are “invincibly prejudiced against the past,” they add.

The “patrons of the false Europe” are “unable to acknowledge the defects in the post-national, post-cultural world they are constructing.”

“Sunk in prejudice, superstition and ignorance, and blinded by vain, self-congratulating visions of a utopian future, the false Europe reflexively stifles dissent,” the authors continue. “This is done, of course, in the name of freedom and tolerance.”

The authors wrote the statement after a meeting last May in which they took a sober look at the current state of European politics, culture, society, and the state of the European mind and imagination.

The authors state that instead of “simply wringing their hands in fruitless anxiety, or adding yet another tome to the ample literature that diagnoses 'the decline of the West'” they decided to write a statement about what makes Europe great and how it is being threatened.

The Paris Statement identifies threats to a “true” Europe and corresponding solutions.

Solidarity and civic loyalty must be encouraged, the statement says, so that justice may be pursued. Europeans must not be “passive subjects.”

“We share our common life and the res publica,” it says. “We assume that it is our duty to take responsibility for the futures of our societies. We are not passive subjects under the domination of despotic powers, whether sacred or secular. And we are not prostrate before implacable historical forces. To be European is to possess political and historical agency.”

Although the continent is characterized by kinship, “the nation-state is a hallmark of Europe,” the document says. “We do not back an imposed, enforced unity.”

Cultural unity can be found through Christianity, the Paris Statement says:

“The true Europe has been marked by Christianity. The universal spiritual empire of the Church brought cultural unity to Europe, but did so without political empire. This has allowed for particular civic loyalties to flourish within a shared European culture. The autonomy of what we call civil society became a characteristic feature of European life. Moreover, the Christian Gospel does not deliver a comprehensive divine law, and thus the diversity of the secular laws of the nations may be affirmed and honoured without threat to our European unity. It is no accident that the decline of Christian faith in Europe has been accompanied by renewed efforts to establish political unity—an empire of money and regulations, covered with sentiments of pseudo-religious universalism, that is being constructed by the European Union.”

“The achievements of popular sovereignty, resistance to empire, cosmopolitanism capable of civic love, the Christian legacy of humane and dignified life, [and] a living engagement with our Classical inheritance” are all “slipping away,” the authors write.

This is thanks to a “one-sided” commitment of “human liberty” that cares about politically correct “freedoms:” “It sells itself as liberation from all restraints: sexual freedom, freedom of self-expression, freedom to ‘be oneself.’”

But this hedonism “often leads to boredom and a profound sense of purposelessness,” especially for Europe’s young:

“The bond of marriage has weakened. In the roiling sea of sexual liberty, the deep desires of our young people to marry and form families are often frustrated. A liberty that frustrates our heart’s deepest longings becomes a curse. Our societies seem to be falling into individualism, isolation and aimlessness. Instead of freedom, we are condemned to the empty conformity of consumer- and media-driven culture. It is our duty to speak the truth: The Generation of ’68 destroyed but did not build. They created a vacuum now filled by social media, cheap tourism and pornography.”

The Paris Statements notes that while Europe boasts of many new sexual “freedoms” and “equality,” it has dramatically increased government regulation of other aspects of life.

“Rules—often confected by faceless technocrats in league with powerful interests—govern our work relationships, our business decisions, our educational qualifications, our news and entertainment media,” the Paris Statement warns. “And Europe now seeks to tighten existing regulations on freedom of speech, an aboriginal European freedom—freedom of conscience made manifest.”

“Political leaders who give voice to inconvenient truths about Islam and immigration are hauled before judges,” it continues. “The false Europe does not really encourage a culture of freedom. It promotes a culture of market-driven homogeneity and politically enforced conformity.”

The authors note how “government power, social management and educational indoctrination” are constantly increasing in Europe.

“European societies are fraying badly,” they state, noting, “It is not just Islamic terror that brings heavily armed soldiers into our streets. Riot police are now necessary to quell violent anti-establishment protests and even to manage drunken crowds of football fans. The fanaticism of our football loyalties is a desperate sign of the deeply human need for solidarity, a need that otherwise goes unfulfilled in the false Europe.”

Reject 'utopian fantasy of a multicultural world without borders'

The Paris Statement proposes the embracing of reality and encouragement of critical thinking.

“We must recover an abiding respect for reality,” it says. “Language is a delicate instrument, and it is debased when used as a bludgeon. We should be patrons of linguistic decency.”

In this moment, we ask all Europeans to join us in rejecting the utopian fantasy of a multicultural world without borders. We rightly love our homelands, and we seek to hand on to our children every noble thing that we have ourselves received as our patrimony. As Europeans, we also share a common heritage, and this heritage asks us to live together in peace as a Europe of nations. Let us renew national sovereignty, and recover the dignity of a shared political responsibility for Europe’s future.