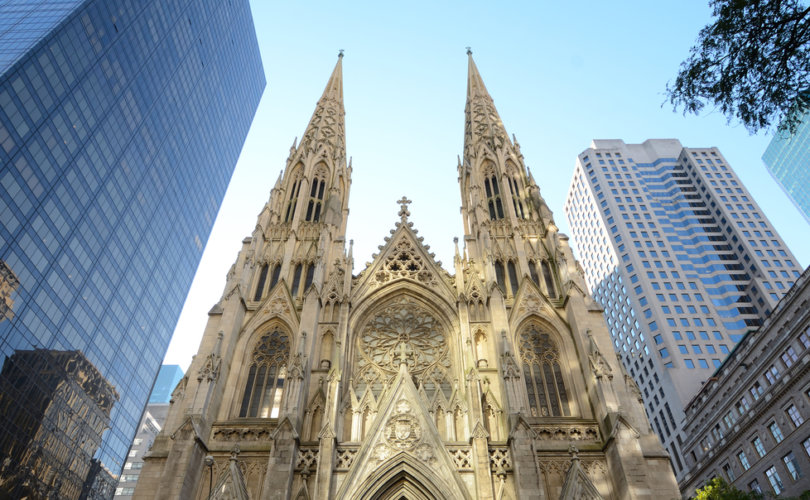 Marc Lamparello entered the church with four gallons of gasoline, lighter fluid, and lighters around 8 PM, the New York Post reports. He turned around to leave to avoid church security, but in doing so spilled some gasoline, which guards noticed and quickly notified the police stationed outside about.

Police say surveillance video shows Lamarello parking outside the church around 6:30 PM, loitering for approximately an hour before removing from his van two gas cans and a bag containing two bottles of lighter fluid and two barbecue lighters. He entered the church a half-hour later. The New York Daily News adds that he had a one-way ticket for Rome, scheduled to leave Thursday.

Around 7:55pm, a man walked into St. Patrick’s Cathedral in Manhattan with gas cans and lighter fluid, and was subsequently apprehended by @NYPDCT without incident. We thank our partners for their help, and remember – if you see something, say something. pic.twitter.com/qEbmklnqzQ

Lamparello reportedly claimed he was merely cutting through the church as a shortcut to reach and refuel his van. But while NYPD Deputy Commissioner for Intelligence and Counterterrorism John Miller said he was “conversational” and “cooperative” when interrogated, his “answers were inconsistent and evasive.”

“I think the totality of circumstances of [an] individual walking into an iconic location like St. Patrick’s Cathedral carrying over four gallons of gasoline, two bottles of lighter fluid and lighters is something that we would have great concern over,” Miller said. “His story is not consistent, so he’s having conversations with the detectives right now. I think if you add to that the events at the iconic location of the fire in Notre Dame this week and all the publicity around that,” it’s “very suspicious.”

This isn’t Lamparello’s first run-in with the authorities; he was previously arrested twice in New Jersey – once for public drunkenness, and once for criminal trespass at Newark, New Jersey’s Sacred Heart Cathedral just three days before his St. Patrick’s arrest.

A motive is unclear at this point; Lamparello is a philosophy professor who has taught at Lehman College and Brooklyn College, comes from a Catholic family, and even served as musical director for St. Joseph’s parish in East Rutherord, New Jersey. Heavy.com notes that he’s also an author who had among his current projects a “witty dialogue on arguments for and against the existence of God.”

“Extremely out of character,” his father said. “He’s a brilliant professor. His writings — other professors can’t even understand his writings. Something happened, we don’t know.”

The incident comes as Catholic churches around the world are on high alert following a fire that heavily damaged Notre Dame Cathedral in Paris, France.