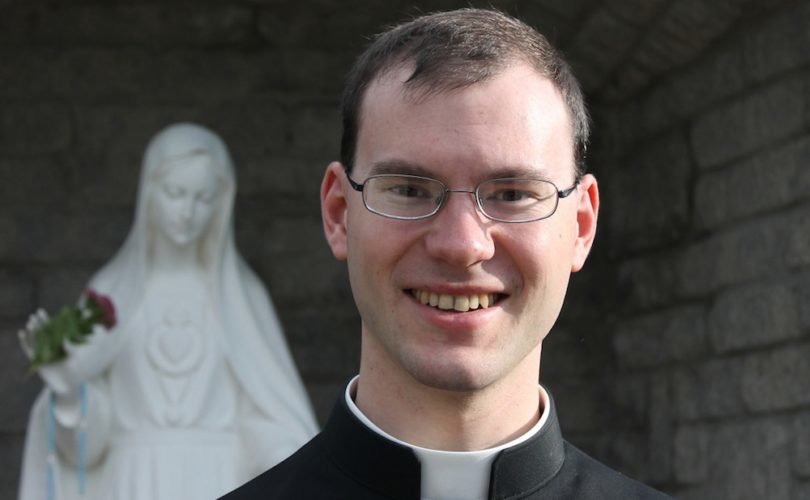 “Every time that I went to pray during the 40 Days for Life at the abortion places, [Fr. Walker] was there with Fr. Terra,” says Bishop Thomas Olmsted.Our Lady Seat of Wisdom Academy

PHOENIX, AZ – As a homeless man faces charges for the murder of a 28-year-old priest and the violent assault of another priest during what police believe was a botched burglary, the murdered priest is being remembered for his pro-life homilies and activism.

Bishop Thomas J. Olmsted of the Diocese of Phoenix lauded the pro-life activism of the late Father Kenneth Walker.

“He and Fr. Terra, FSSP, [would] invite the whole congregation to say a prayer begging God for mercy regarding Roe v. Wade and the ‘scourge of abortion’ before they [began] their sermons.”

“Every time that I went to pray during the 40 Days for Life at the abortion places, [Fr. Walker] was there with Fr. Terra,” said Bishop Olmsted, reported the Catholic Sun. “They are faithful priests, joyfully serving their people.”

According to Phoenix 40 Days for Life leader Jose Calzadilla, Father Walker and Father Terra joined the campaign every week at the Family Planning Associates site in Phoenix and Planned Parenthood site in Glendale.

“Fr. Walker helped lead the Good Friday rosary at the Glendale Planned Parenthood this past spring,” he told Wednesday STOPP Report. “They attended pro-life luncheons and rallies. Their support for the unborn came across as a natural part of their lived faith and priesthood. As a member of the pro-life community in the diocese, you just KNEW of or saw their support. No question.”

Father Walker, who had just celebrated his second anniversary of ordination, died last week after being shot during an attempted burglary at the rectory of Mater Misericordiae Mission in Phoenix on Wednesday evening.

Police have arrested and charged Gary Michael Moran, 54, with first-degree murder, attempted murder, armed robbery, and theft. Moran, who has a previous criminal record, had been out of jail for less than two months.

Father Joseph Terra, the priest who managed to call 911 after being brutally assaulted by the burglar told investigators that he had opened the kitchen door Wednesday night after hearing noises outside. He was immediately assaulted by a man wielding an angle iron, reported AzCentral.com. Fr. Terra managed to retrieve a gun from his bedroom but was unable to shoot the weapon in self-defense because of an injury to his finger he suffered during the initial attack.

Court documents state that the attacker made Fr. Terra “get on his hands and knees and told him to give him money,” according to AZCentral. At one point Fr. Terra blacked out. He did not remember calling 911. His next memory is giving the gunshot-wounded Fr. Walker absolution, the documents state.

A Solemn High Requiem Mass was offered for Father Walker on Monday at St. Catherine of Siena Parish in Phoenix.

Walker and Terra, both members of the Priestly Fraternity of Saint Peter, had been outspoken in defending life and opposing abortion.

“He and Fr. Terra, FSSP, [would] invite the whole congregation to say a prayer begging God for mercy regarding Roe v. Wade and the ‘scourge of abortion’ before they [began] their sermons,” commented one Mass attendee. “They are very devoted, pro-life priests who trust in the power of prayer to shut down abortion clinics.”

In one recent homily uploaded to Youtube, Fr. Walker explicitly mentions the “evils of abortion and contraception” that “so plague our world.”

“If real danger is present, it is necessary to be aware of it,” he told the congregation.

Walker was instrumental in motivating parishioners to attend the 40 Days for Life campaign in Phoenix and would regularly pray the Rosary along with Terra at a local abortion clinic.

Lisa Blevins of 40 Days for Life Phoenix called Walker a “tireless pro-life prayer warrior” who worked year-round on behalf of the unborn and their parents.

“He was definitely always out there praying for all of those going into and coming out [of the abortion mill]. He was just a wonderful witness to life,” she told LifeSiteNews.

A pro-life prayer vigil in honor of Father Walker is planned for this Saturday at the Family Planning Associates abortion mill. The 40 Days for Life community will be attending. (Find information on the vigil here.)

Blevins believes that Walker will be “pouring down blessings from up high for us down here, especially for the 40 Days for Life campaigns.”

“Fr. Kenneth Walker was, as any christian should be, adamantly against the cruel murdering of the tiny children in the womb of their mothers,” Father Peter Carota, a Catholic priest of the Diocese of Stockton who lives in Phoenix, wrote on his blog.

Carota told LifeSiteNews that Walker’s love for God made him “very consistent” in word and action in opposing the “murdering of the pre-born baby.”

“There is no worse crime that’s going on now against humanity and against God as taking the life of the unborn. How can you not be upset? How can you sit back and not do anything about it? It’s the most terrible thing that could ever happen. And it’s just going on day in and day out,” he said.

Carota said he has special admiration for a priest who not only speaks against abortion from the pulpit, but who goes out and prays at abortion mills.

“Let us rather spend our lives in preparation for the eternal life of heaven where there is no more death or destruction, but the perfect attainment of all joy and peace.”

“To go out and pray at the abortion mills takes extra effort and I really appreciate any priest who does that.”

In his homily on Youtube, Walker urges people to live life for heaven “where there is no more death.”

“Our Divine Savior loves us and desires our eternal happiness. Let us not disappoint him or offend him, for he is already so much offended. Nor let us seek perfect happiness in this world with its fleeting joys and empty promises, like a single firecracker that gives one burst of fire and excitement and then is gone,” he told the congregation.

“Let us rather spend our lives in preparation for the eternal life of heaven where there is no more death or destruction, but the perfect attainment of all joy and peace.”

Moran, described by Phoenix Police as a “career criminal,” is being held on a $1 million cash-only bond.