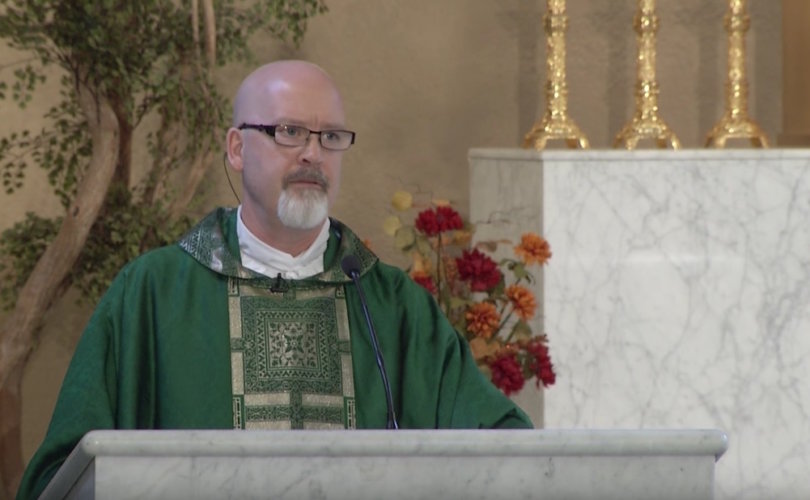 PHOENIX, Arizona, October 6, 2016 (LifeSiteNews) — “Your soul will be in grave danger” if you vote for a candidate and party that are committed to expanding abortion on demand, “especially if you present yourself for Holy Communion after casting such a vote with the full knowledge of what you’re doing,” the rector of the Cathedral of Sts. Simon and Jude said in a homily skewering pro-abortion arguments and informing Catholics of their duty to vote pro-life.

Father John Lankeit, whose diocese is led by Bishop Thomas Olmsted, began his homily explaining that there is an important distinction to be made between social ills and intrinsic evils. He said Catholics may disagree about issues of “prudential judgment” like immigration, racial injustice, the economy, and healthcare, but may never “at any time, under any circumstances” commit, promote, or enable intrinsic evils.

“Suppose a candidate for president promoted a policy that would make it legal for someone to kill a black person if that black person created a hardship for them getting the education they desired,” he said after describing how the two parties differ on affirmative action. “How many of you would be comfortable voting for that candidate?”

“One party favors open borders, the other party favors law and order,” Lankeit said. But “suppose a candidate for president promoted a policy that would make it legal for someone to kill a Hispanic person if the presence of that Hispanic person made it more difficult to pursue one’s career of choice. How many of you would be comfortable voting for that candidate?”

In what many would call a “mic drop” moment, Lankeit told his congregation, “There is a candidate, in this 2016 race for president, who along with that candidate’s political party does, in fact, sanction the killing of blacks and Hispanics in the situations previously described under one particular condition: That that black person or that Hispanic person is still in his or her mother’s womb.”

This candidate and party use euphemisms and “sanitized statements” to mask that they actually believe this, Lankeit said. He then prefaced what he was about to say with a message for post-abortive women that God loves them and they can receive forgiveness and healing.

“God’s mercy is bigger than your sin and your pain. In 10 years of priesthood, I have often been blessed to be the one who gets to welcome back a woman to the merciful embrace of God the Father — take her hand and put it back in the hand of God the Father — after she has admitted to, and repented of, her abortion in the Sacrament of Confession,” he said. “A priest in such a situation has the privilege of assuring the woman that she has never for a single moment lost the love of God the Father, nor her dignity as his beloved daughter of that same God, no matter what she did.”

‘Stupendously deceptive’ to claim economic reform will stop all abortion

It becomes evident that the hypothetical situations about other humans being killed for getting in the way of someone’s education or career are reality “when we consider that a woman can walk into Planned Parenthood and have her baby put to death because she doesn’t want to jeopardize her education or career,” Lankeit said. Those “shocking scenarios described previously are not only possible, not only real, but also among the most common reasons for abortion in America.”

He said if a voter doesn’t know which party and candidate promote abortion on demand up until the moment of birth for any reason funded by taxpayers and promoted abroad, “then you should not even consider voting until you do,” Lankeit instructed his flock. “Ignorance in this area costs millions of babies their lives and jeopardizes the souls of many Catholic voters.”

But “if you do know which candidate and party want to promote and expand abortion, and you still intend to enable them to continue their war on the unborn with your vote, then it is my duty as a priest to tell you that your soul will be in grave danger, especially if you present yourself for Holy Communion after casting such a vote with the full knowledge of what you are doing,” he said.

Lankeit then tackled the common arguments thrown at pro-lifers who oppose abortion.

A tactic of the devil “is to encourage us to make excuses for our participation in very evil activities by appealing to other good things that we support, which we try to convince ourselves somehow cancel the grave evil we choose to participate in,” he said.

It is “hypocrisy of the most extreme kind” to be against war but not abortion, the priest said.

Furthermore, treating abortion as one issue among many “requires that a person pretend not to know what abortion is or what abortion does.”

The claim that a candidate or party will “reduce abortions by improving economic or social conditions, while simultaneously promoting abortion as a right” is “stupendously deceptive,” said Lankeit, noting that economic and social can be conditions can affect a mother’s abortion decision but are not causes.

“If eliminating abortion were merely a matter of economics, or access to healthcare, or other socioeconomic factors, then why do wealthy mothers also abort their children?” he asked.

‘Serious sin of omission’ to not defend life

Priests have a duty to speak out about the issue of abortion, Lankeit said, quoting Scripture. And everyone has “a serious obligation to protect human life,” he continued. “Whoever fails to do this, when otherwise able to do so, commits a serious sin of omission. They jeopardize their own spiritual well-being and are a source of scandal for others. Should they be Catholics, they should not receive Holy Communion.”

“A priest who is more concerned about the state of his people’s souls than they are themselves deserves the esteem of his people for his willingness to speak such difficult truth to them with genuine love—to put the welfare of his people’s souls ahead of his own reputation, popularity, or comfort,” Lankeit said. “Such a priest should receive respect, admiration, and support, rather than their resistance or criticism.”

Lankeit finished his homily with a final bombshell: “So please pray for, thank and encourage the spiritual father that God has appointed for you and who loves you enough to tell you the truth with those challenging words. Because the priest who said these particular words is your bishop — and my bishop.”

The prepared version of Lankeit’s homily can be read in full here.

* Priest: ‘You might not have a church to go to if you don’t vote the right way in November’
* The uncomfortable truth about Christian support for Trump
* Donald Trump has undergone a transformation in recent months that many did not think possible
* Don’t buy Satan’s lies: Only one political party aligns with the Church on the most basic issues
* Fr. Pavone on US election: It’s ‘time for repentance’ over abortion, not just debates
* WATCH: Fr. Pavone on why Catholics can’t sit out the election
* Donald Trump v. Grandma Clinton: What's Really At Stake? (Michael Matt)
* A refresher on Catholic teaching about abortion for this US election season
* Kansas bishops: Catholics must vote with ‘catastrophe’ of abortion at ‘forefront of their minds’