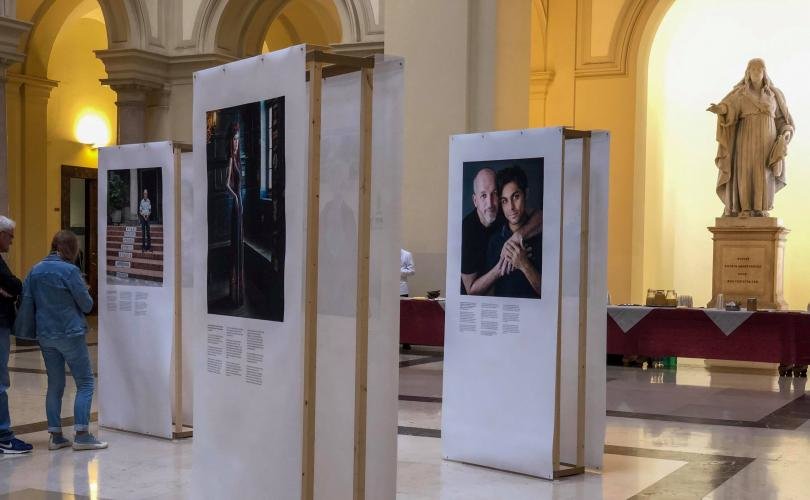 ROME, May 29, 2019 (LifeSiteNews) — A new photo exhibit on atheism and unbelief — featuring a homosexual couple, a transhumanist and a witch who advocates “human extinction” — opened today in the main atrium of the Pontifical Gregorian University in Rome.

Readers will recall that, despite its rich history, the Jesuit-run pontifical university has in recent years been the site of key events including a secret meeting that sought to sway the 2015 Family Synod to accept same-sex unions, and a public lecture by then newly-appointed Pontifical Academy for Life member, Fr. Maurizio Chiodi, undermining Humanae Vitae.

The exhibit — titled “Unbelievers” — is being hosted in conjunction with the university’s faculty of theology. On display from May 28-30, it features portraits and stories of atheists and unbelievers from across the world.

Visitors see and learn about London-based “practitioner of chaos magic,” Patricia MacCormack, who says her “interest in occultism” is about “resisting God as the overarching white patriarchy.” The exhibit notes that “she is also an advocate for human extinction.”

Young religious sisters from developing countries who study at the Gregorian, together with their fellow students, then meet Sergio Viula (55), a former evangelical pastor photographed with his homosexual lover. They read that Sergio “converted” to atheism and “now lives happily with his husband Andre (28) in Rio de Janiero, Brazil.”

Perusing the portraits, one then encounters ‘Apostle’ Erlon Jacques, whom we are told  leads the last active congregation of “Comptean positivists” at the “Temple of Humanity in Porto Alegre, Brazil.”

‘Apostle’ Erlon asks: “Why do we have a religion without God?” He responds: “People think too much about the holy books and forget about love and respecting each other. The essence of our religion is human connection through altruism. It’s a natural religion. We have faith in love, science and humanity.”

“Comte taught us to continuously update the dogma to reflect the changing times and knowledge,” he notes.

Visitors to the exhibit then meet Betina (29), an agnostic transhumanist living in Rio de Janiero who “would like to extend life forever.” Betina “argues that we are closer than we think to the paradigm shift needed to make technologies such as cloning ethically acceptable.”

Moving further on, visitors take in the portrait of 16-year-old Heda Frøland, a member of the Humanist Youth Group in Norway. They read: “Like most people in the area, Heda’s parents and older sister had Christian confirmations. ‘I’m very grateful that I chose another way, and stood by it, because it changed my view of the world into a better one,’” young Heda says.

The whole exhibit is displayed before the large statue of the Lord prominently located in the atrium of the Pontifical University. At the statue’s base is etched the inscription: “Go, teach all nations. Behold, I am with you.”

Yet the event does not claim to be about faith but about portraying the nature and diversity of unbelief across the world.

According to a description provided to visitors at the exhibit, its portraits and stories aim to “give an insight into the diversity of beliefs and worldviews held by people who do not believe in God or gods – ranging from humanists to communists, and from religious atheists to anti-humanists.”

It is “one of seven non-academic projects funded by the Understanding Unbelief programme with the aim of increasing public engagement with their new research.”

The exhibit was organized to coincide with a “major atheism conference” on Cultures of Unbelief taking place at the Gregorian University, May 28-30.

The conference is being co-hosted by the Vatican’s Pontifical Council for Culture and the Nonreligion and Secularity Research Network at the University of Kent, England.

Conference participants presented the results of their research at the Vatican on May 28.

According to organizers, the event marks “the fiftieth anniversary of the Vatican’s own Culture of Unbelief conference in March 1969. That event, also held at the Gregorian University, was the world’s first international conference for the social-scientific study of atheism and nonreligiosity.”

Reaction from students in Rome

Priests and young lay students in Rome were less than edified by the exhibit.

“It’s a sort of exercise in intersectionality given the gamut of identity groups represented,” one priest-student in Rome told LifeSite this afternoon.

Intersectionality is the claim very popular in universities today that categories like race, gender, class, abilities, sexuality, social status, etc. are all interconnected. It ties into the mentality that the more of an oppressed victim you are, the greater special weight your opinion needs to be given on any given topic.

“It’s a kind of new structuring of society according to progressive ideals; most would say it’s rooted in social Marxism,” the priest explained.

“Generally speaking,” he said, “I want universities, especially pontifical universities, to be able to rise above virtue signaling. This kind of exhibit makes it look as though the Church is concerned with gaining more secular credibility.”

Speaking on condition of anonymity, the priest-student went on:

We want universities — especially Catholic universities — to be places with free and open discussion of ideas. But every university has a mission and core values. We know there are some things that would never be entertained as valid perspectives in an exhibition — such as a person describing why he holds racist views. So it is unclear why the university would promote an exhibition that includes such things as a wiccan who practices “chaos magic” and “advocates for human extinction.”

“It seems counterproductive,” he said.

“Another exhibit, which featured a former Christian pastor who left ministry in order to become an atheist, and to form a same-sex union with a much younger man, also has unfortunate resonances, given recent Church history,” the young priest added.

“As a student at a Pontifical university, one expects an atmosphere that is conducive to such studies,” a young theology student discerning a vocation to the priesthood told LifeSite. “It’s a scandal to treat the Catholic academic life in separation to Christ. How would St Ignatius respond?”

The student showed particular indignation over the choice to house the exhibit in the Gregorian’s main atrium: “In the same aula as the statue of Our Lord bearing the inscription ‘Go, teach all nations; Behold, I am with you,’ students are greeted by a photo of a Catholic man (28-year-old Andre) who thinks he has contracted a ‘marriage’ with his homosexual partner (55-year-old Sergio) and whom the description calls his ‘husband.’”

“The duplicity of a ‘Catholic’ university that juxtaposes such messages is the quintessential image of the relativism afflicting society and, unfortunately, great swaths of the Church. Why are we casting aside the Lord’s beautiful words: Behold, I am with you!”

A comment box was placed next to the exhibit to take visitors’ comments.

According to sources at the university today, one student put in the comment box: “Satanic.”