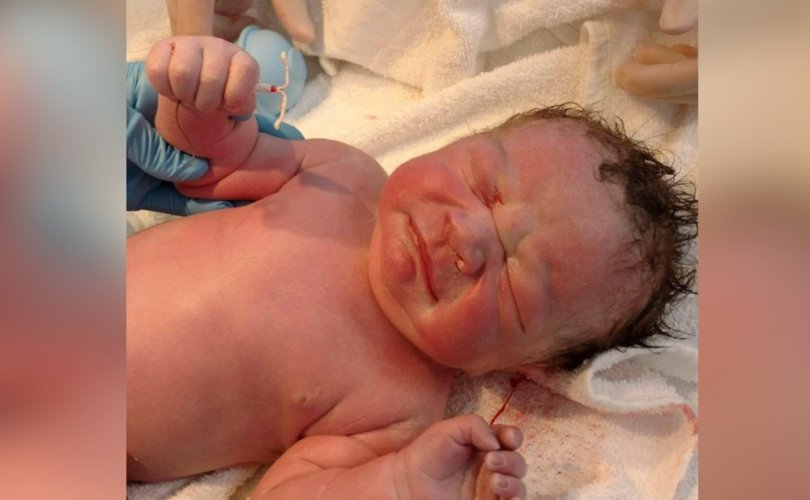 May 5, 2017 (LifeSiteNews) — Lucy Hellein’s baby was never meant to be. Period. The Alabama woman had been fitted with the abortion-causing intrauterine device (IUD) Mirena, which the manufacturer boasts of being 99 percent effective in preventing pregnancy.

But life has a way of overcoming even the biggest odds.

It’s when doctors were delivering the baby by C-section that they found the IUD implant behind the mom’s placenta.

A nurse then put the IUD into the newborn baby’s hand and snapped a picture. The photo was then uploaded to the mom’s Facebook account, where it went viral within 48 hours, being shared by tens of thousands.

Planned Parenthood nurse practitioner Laura Ghasseminia told WTLV-TV that Lucy is “very lucky” that the IUD did not kill her son.

According to the manufacturer, the Mirena IUD makes a woman’s body hostile to new life in three ways: It thickens the woman’s cervical mucus to prevent sperm from traveling to an egg; it prevents sperm from fertilizing an egg; and if a sperm and egg do unite, the IUD thins the lining of the uterus, making it impossible for the newly conceived human being to implant on the uterine wall.

“This woman is very lucky that when the placenta grew over the IUD it did not disrupt the blood flow to the placenta,” said the Planned Parenthood nurse.

Lucy said that although Dexter “wasn't planned, my family and I feel incredibly blessed.”