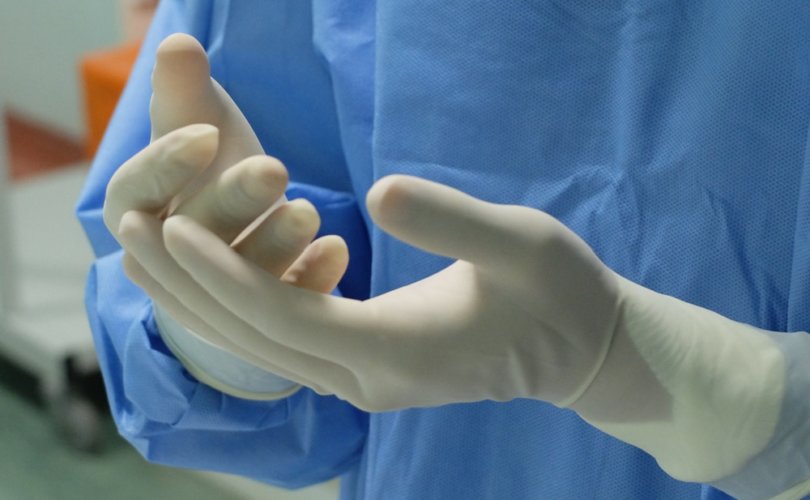 BATON ROUGE, Louisiana, April 9, 2020 (Operation Rescue) — Despite a serious Coronavirus outbreak in the New Orleans area, abortion facilities in Louisiana remain open for business. At a time when ordinary citizens are ordered to stay at home, and legitimate businesses are shutting down, Louisiana abortion facilities continue to invite women seeking elective abortions — including those from out-of-state — to pack their businesses.

An abortionist named Musa Williams, an intern at the LSU Medical Center, travels from the Coronavirus breakout zone in New Orleans to conduct abortions at the Delta Clinic of Baton Rouge.

Recent photos of Williams taken on April 2, 2020, at the Delta Clinic should give everyone pause.

Instead of changing into clean scrubs once at the facility, Williams reported to work with his scrubs on and a surgical head covering in place, bringing whatever contamination he encountered along the way with him.

With the help of another Delta abortionist, Nsikan St. Martin, Williams gave abortions to about 30 women that day in those filthy scrubs.

St. Martin has had her own problems. In 2015, she admitted to working as a stripper on weekends, and was also arrested during a domestic dispute with her live-in girlfriend that same year.

Mahoney told Operation Rescue that police arrived and threatened pro-life activists with arrest and removal from the public sidewalk if there were more than 10 people or if they did not stand six feet apart — all this while the waiting room at the abortion facility was crowded with people without any known protective gear.

The pro-life activists were practicing social-distancing and some wore protective masks.

On a normal day, the Delta Clinic is a dangerous place. Operation Rescue has documentation of at least eight botched abortion injuries there.

The most recent known emergency that required ambulance transport took place on March 15, 2019. It prompted an investigation and inspection that found 16 pages of violations that resulted in Delta’s facility license being place on emergency provisional status and a fine of $4,200.00. (See p. 2 of Department of Health letter dated April 10, 2019.)

The Delta Clinic is considered a repeat offender, having failed inspections on numerous occasions, most recently in June 2017, and in July 2018 when a staggering 51 pages of citations were noted. Deficiencies cited included some of the same violations found cited in the 2019 report.

In fact, the Delta Clinic has a long history of fines, medical malpractice suits, and has been responsible for the deaths of at least two patients, Ingar Weber and Shelia Hebert.

“If the abortionist can’t even wear a clean shirt to work, he’s certainly not fit to conduct surgical abortions on women,” said Operation Rescue President Troy Newman. “During this unprecedented health emergency, it’s simply appalling that the Delta Clinic is allowed to endanger the public while peaceful pro-life activists obeying recommended safety protocols, are threatened with arrest for trying to prevent harm to women and their babies. The Department of Health needs to stop covering up for abortionists and start protecting the public from Louisiana’s dangerous abortion mills.”