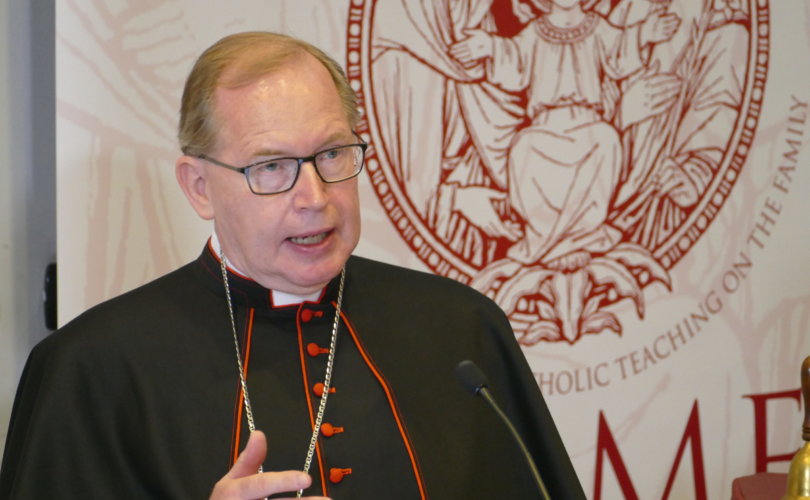 May 17, 2019 (LifeSiteNews) — Only a male can represent Christ in conferring the sacraments of Holy Eucharist and Confession, His Eminence Cardinal Willem Jacobus Eijk of the Netherlands told the Rome Life Forum Thursday during a Q&A period.

The archbishop of Utrecht responded to the inquiry of how Catholics should react should Rome permit the ordination of women as deacons. Eijk reaffirmed Church teaching and principles as well when asked about responding to bishops who support the LGBT agenda, and also regarding gender ideology encountered by children in school.

Eijk opened the Rome Life Forum Thursday with an address that warned of the threat “gender theory” poses to the traditional family and the Christian faith.

The question on female deacons reflected the ongoing push for women’s ordination both to the diaconate and to the priesthood — though neither is possible, according to the Church’s tradition of an all-male priesthood as ordained by Christ himself, which Eijk confirmed.

“I firmly believe that the Holy Spirit will prevent Rome from saying that women can be ordained deacons,” the cardinal said. “And that’s not because I have disdain for women, absolutely not. That’s of course because of our theology.”

The question on female deacons followed the conclusion of a commission established by Pope Francis, which Eijk referenced. The pope had directed the commission to study the role of women in the Church historically, and the group did not reach agreement on the question of a female diaconate, to the disappointment of left-leaning Catholics.

“And you know we have only one sacrament of ordination,” Eijk said, with three degrees: deacon, priest, and bishop. “In all these degrees, you can only participate only when you are male.”

Asked how Catholics should respond when their children are confronted at school with gender ideology, Eijk said first by prayer, but also by example. “I should say above all by praying and by witnessing.”

The cardinal explained that parents are the first educators of their children, and children will learn from their parents’ witness of faith.

The very act of taking one’s children to Mass, even when they are young and can be difficult to manage, is important, said Eijk. He said as well that children are able to process rational explanations. When you take them to church and teach them to pray, Eijk added, they will learn about sacral things without you even realizing.

“And that’s the first thing,” he said. “You have to witness (to) your faith.”

In many cases the world may be stronger and will win, he continued.  “But nevertheless, our duty is to bear witness to the Gospel of Christ,” he said, and “also to what the Church says about the relationship between gender and sex.”

The cardinal was also asked during the Q&A about how to approach bishops who promote, support, and allow the LGBT agenda to be part of their Catholic communities.

“There is a great confusion in the Church and perhaps even bishops are sometimes receptive for that,” he replied. “We have to pray. But also we have to bear witness to the truth.”

Laymen have their influence, too, Eijk added, encouraging Catholics away from shyness in approaching bishops.

“Don’t be shy,” he said, “and also witness to your bishops.”

Eijk, who was trained as a physician prior to ordination, along with having a doctorate in philosophy and a doctorate in theology, was asked how he would treat a patient who was thinking about attempting to change his sex.

We have to admit that we have transgenders in our midst, he added, and also Catholic transgenders.

“The answer is not hormonal treatment and above all (not) surgery,” he stated. “Surgery is not the good answer for a psychological problem.”

The patient must accept what the problem is for actual help to be rendered, Eijk said. “In a friendly way, I will try to understand them and take them seriously in their problems. … But you know, at a certain moment, when they don’t accept psychological support, then at a certain moment I would have to witness my faith, and of my view of their relationship between the sensual aspects of gender and biological sexuality.”

Eijk, a return presenter at the Rome Life Forum, has voiced criticism of the confusion propagated in the Francis pontificate, saying the lack of clarity endangers and risks “fracturing” the Church.

In a recent comprehensive interview with LifeSiteNews, Eijk discussed his efforts in seeking clarity from Pope Francis related to confusion stemming from the pope's controversial exhortation Amoris laetitia, along with other issues including intercommunion with Protestants.

The fifth annual Rome Life Forum runs May 16–17. Click here for information on livestreaming the addresses at the Forum.