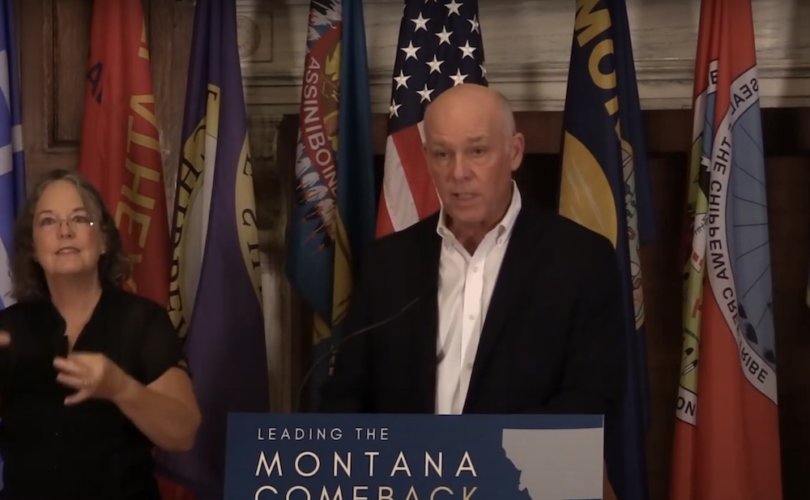 HELENA, Montana (LifeSiteNews) — Although many Republican-led states have banned COVID-19 injection mandates and compulsory vaccine passports to access public venues, almost all have stopped short at preventing employers from forcing their employees to get the jab.

To date only one state has stood up to protect the rights of employees to refuse the COVID-19 injection: Montana.

Earlier this year the legislature of Republican-led, largely rural Montana passed a law which prohibited requiring the shot as a condition of employment, calling such mandates “discriminatory” and a human rights violation, the Associated Press reported.

Passed by Montana’s legislature in May 2021, HB 702 came under fire this month after a group of physicians tried to pressure the government to reverse the measure.

Montana Medical Association president Dr. Pamela Cutler called the law protecting the freedom of Montanans to refuse the jab a “travesty,” arguing that it “is against everything we’ve ever known or believed about public health,” and “needs to be fixed.”

But the Big Sky State’s Republican governor, Greg Gianforte, is not backing down.

In an August 24 press conference, Gianforte warned about the Delta variant but said choosing whether or not to get the experimental shot is a “personal decision.”

While the governor encouraged people to get the shot voluntarily, he said that “the state of Montana will not mandate COVID vaccinations, period.”

Gianforte’s spokesperson, Brooke Stroyke, said in an email obtained by the AP that “[w]hile the governor continues to encourage Montanans to receive safe and effective vaccines, doing so is voluntary and no individual should face discrimination based on vaccination status.”

Montana’s law states that “it is an unlawful discriminatory practice” for “an employer to refuse employment to a person, to bar a person from employment, or to discriminate against a person in compensation or in a term, condition, or privilege of employment based on the person’s vaccination status or whether the person has an immunity passport.”

According to the AP, some of the most vocal supporters of the legislation were employees of Benefis Health System based in Great Falls.

Employees of the health system had been told earlier in the year they would need to take the abortion-tainted drugs or face being fired.

When Gianforte signed the bill banning employer mandates, however, Benefis backed down.

Benefis Health Systems announced such a mandate earlier this year that had to be rescinded once Governor Gianforte signed a new law in may stating that’s not allowed. https://t.co/b1VIEFJSV0

Montana law allows healthcare systems to require unvaccinated employees to wear masks, but does not permit employers, even in the healthcare industry, to compel vaccination as a condition of employment.

Corporations such as Walmart, United Airlines, and others which mandate the shots for their employees are not permitted to do so for employees who live and work in the 41st state.

Montana law also prohibits any person or “government entity to refuse, withhold from, or deny to a person any local or state services, goods, facilities, advantages, privileges, licensing, educational opportunities, health care access, or employment opportunities based on the person’s vaccination status or whether the person has an immunity passport.”

Additionally, it is illegal in the Big Sky State for any “public accommodation to exclude, limit, segregate, refuse to serve, or otherwise discriminate against a person” for choosing not to get the jab.

The Montana legislature justifies the law by its finding that “health care information is personal and sensitive information that if improperly used or released may do significant harm to a patient’s interests in privacy and health care or other interests.”

Further, per the Montana Supreme Court’s 1997 decision in State v. Nelson, “medical records fall within the zone of privacy protected by Article II, section 10, of the Montana Constitution” and “are quintessentially private and deserve the utmost constitutional protection.”

Montana is presently the only state in the U.S. to prevent employers from requiring their employees to get the shot, while corporations and local governments in other states impose new vaccine mandates on an almost daily basis.

The federal government, as well as many states and cities, have begun widespread vaccine requirements by imposing them upon certain occupational demographics, such as state and federal employees, healthcare workers, and first responders.

Over the past weeks and months the federal government has created new rules forcing federal employees to get the jab or be subject to frequent testing, constant masking, and travel restrictions.

Subsequent to the Food and Drug Administration’s approval of the two-dose Pfizer-BioNTech COVID-19 mRNA shot granted last week, active-duty military personnel must also submit to getting the shot.

With 800,000 unvaccinated military members, there is concern the mandate will lead to a mass exodus of servicemen who refuse the shot.

Following the FDA’s approval of the Pfizer drug, President Joe Biden called on more private companies to force their employees to get the jab, a suggestion which would be illegal under current Montana law.

In California, a “gut-and-amend” version of a transportation bill drafted late last week would impose a statewide vaccine mandate, compelling all Californians to show proof of inoculation to gain access to a slew of indoor public venues or keep their jobs, and all employees to show proof of vaccination in order to maintain employment.

If passed, the law would be the first statewide vaccine passport scheme in the United States.