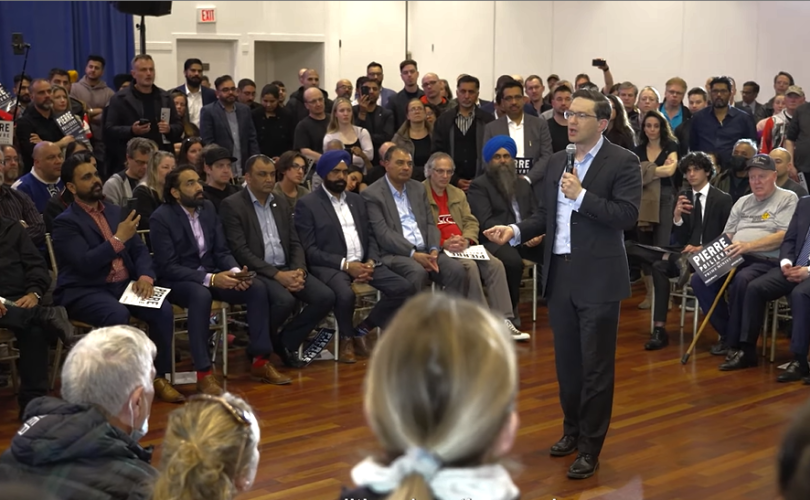 (LifeSiteNews) – Newly elected Conservative Party of Canada chief Pierre Poilievre has come out strong in recent months against the World Economic Forum (WEF) and, by extension, the Great Reset.

At a campaign event in May, he said that Canadian politicians who want to work with the WEF in Davos should go there on a “one-way ticket.”

His statement was met with strong applause.

As Prime Minister, I will ban ministers and other top officials from involvement with the World Economic Forum.

In early September, just before the leadership votes were cast, Poilievre doubled down on his anti-WEF stance and was met with thunderous applause and a standing ovation when he said he would “ban all [his] ministers from any involvement with the World Economic Forum.”

Although not a social conservative on important issues, such as abortion and marriage, he has promised to help reclaim Canadian values and a love of freedom, and has taken a strong stance against collectivist measures, such as vaccine mandates for travel.

He has been adamant that he is Canada-first economically and called the WEF a “policy agenda” organization that seeks to impose globalist economic interests on Canada.

His comments echo what mRNA vaccine technology inventor Dr. Robert Malone said about the WEF at the World Council for Health Better Way Conference in May.

Malone said in his presentation that the WEF is nothing more than a “trade organization representing the world’s 100 largest corporations.” He added, “[It is] not a world government no matter how much they seek to label themselves as that … and has had a 30-year program of training its functionaries, its acolytes, and placing them … all over world government and various economic sectors throughout the world, including technology, media, currency, banking, etc.”

Malone stated that WEF actors had been intentionally inserted to serve the large corporations “that fund this trade organization” and that WEF head Klaus Schwab is primarily concerned with “stakeholder capitalism” where business is at the centre of society, with all other sectors serving business.

In November 2020, Poilievre posted an article on Facebook from Canadian journalist Rex Murphy entitled The ‘great reset’ no one asked for. Murphy wrote in that piece that the declared pandemic was “being taken as a cue by various eminent globalists to pursue a totally unrelated agenda.”

That agenda, according to Murphy, was being pushed by a “combination of United Nations satraps, tech billionaires and, naturally, the apocalyptic environmental contingent have decided that this time of anxiety and disruption is the perfect moment to push their agenda.”

Murphy blasted Prime Minister Justin Trudeau’s opportunism to use the economic chaos that resulted from government-imposed shutdowns as a moment to “reset, restate or rearrange Canada’s industrial foundation.”

— Article continues below Petition —
PETITION: Demand the Conservative Party apologize for not resisting Trudeau's COVID regime
Show Petition Text
4413 have signed the petition.
Let's get to 5000!
Thank you for signing this petition!
Add your signature:
Show Petition Text

Although there are a host of societal and philosophical goals attached to the WEF’s plan to reset the world economy, it is my opinion that – although dangerous – the ideas of the reset crowd are basically insane and make science fiction look like reality.

This is not to say that damage will not and has not been caused due to the WEF. But I tend to agree with Malone and Poilievre that at root of the WEF ethos is a form of stakeholder capitalism that essentially uses political movements to co-opt the buying power of gullible consumers. Again, this money is attached to an anti-God ideology, but a good case can be made that the most effective political tool to fight the reset would be an economic tool.

If the Great Reset relies on a type of globalist corporatism, as Malone said in his presentation, then a Canada-first industrial movement would cut to the heart of stakeholder capitalism as presented by the WEF.

This seems to be what Poilievre believes and is pushing for.

He has hammered home the message of getting rid of the “gatekeeper economy” of Trudeau, so that Canadian industry can flourish.

What he means when he says “gatekeeper” is essentially a bureaucrat who puts a load of red tape in front of Canadians who want to produce or start businesses.

As mentioned, Poilievre is not a social conservative. However, he does seem to disdain the woke narrative of our day.

While he himself will not (likely) champion socially conservative causes, he believes that it is wrong for gatekeeping bureaucrats to attach money to ideology.

If he follows through with his intention to liberate Canadians from economic strangleholds, this means that conservatives will not have to jump through endless hoops to get funding or to simply be left alone by tax-hounds with a woke agenda.

This is not to say that money or economic freedom cures social evil, but it cannot be denied that bureaucracy is likely the strongest tool of the Marxist leftists who like to attach the rainbow and climate agenda to every penny spent or doled out in Canada.

To conclude, Poilievre might be the right man for the job to strike at the heart of the Great Reset in Canada, because his approach is strictly economic, thus would not be easily scoffed at in terms of “conspiracy” or “culture war.”