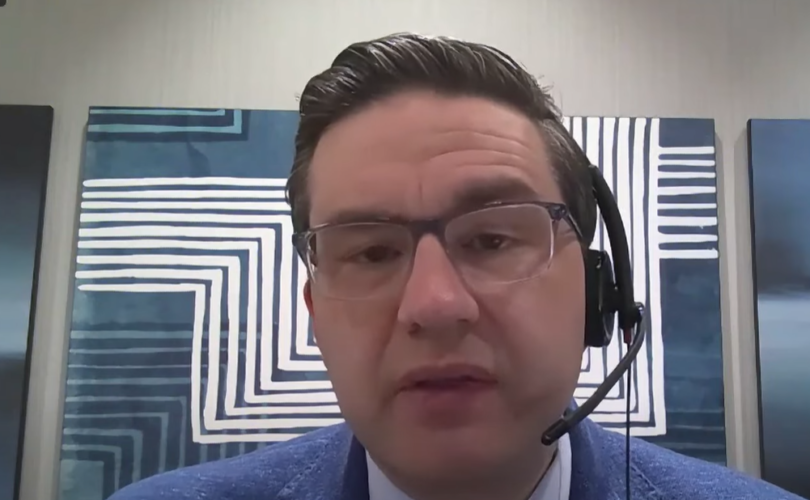 The act is called “An Act to prevent the imposition by the federal government of vaccination mandates for employment and travel,” and is listed as bill C-278. He tabled the motion during a morning session in parliament on Thursday.

The full text of the bill will be available later today: https://t.co/13x4T6TPOC pic.twitter.com/pvsXSNHLJF

“Mr. Speaker,” he said, “today I’m taking another step to give Canadians back control of their lives.”

The proposed bill “would ban the government from imposing vaccine mandates as a condition of travel or employment.” If the bill were to pass, “the government would no longer be able to require federal workers to get vaccinated in order to keep their paychecks and jobs.”

He added, “In other words, it would allow all Canadians regardless of their personal medical decisions to continue to work in the federal sector or travel on trains, places and other federally regulated modes of transportation regardless of whether they are vaccinated.”

Poilievre illuminated how “most countries have removed mandates for traveling” and “all provinces have no removed vaccine mandates,” along with the “big five banks.”

He called the mandates “discriminatory” and said that he has “met countless people and heard endless tragic stories of people separated from family members” due to restrictions.

He also called out the government for imposing mandates that have left people “languishing without a paycheck despite having a spotless tack record serving their employer over many years.”

“These mandates have become nothing more than a cruel attempt to demonize a small minority, and they are absolutely unnecessary and without any scientific basis,” he said.

The bill is in its initial reading and will now move to the next phase.

Poilievre took heat on Tuesday for the fact that he did not register a vote in favor of ending the current travel mandates in Canada. However, it was revealed that a technical glitch stopped him from doing so, and that he was seeking to rectify the situation.

His recent motion to not only end but ban future federal mandates seems to be in keeping with his promise to oppose the mandates “until they are removed.”

Pierre Poilievre wants to be Prime Minister: Should pro-life Canadians support him?