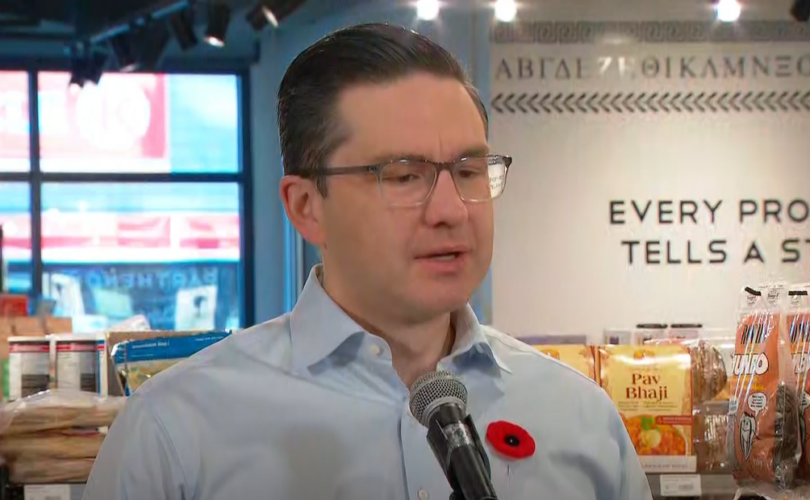 VANCOUVER (LifeSiteNews) — Conservative Party of Canada (CPC) leader Pierre Poilievre has reiterated his belief in “free choice in vaccination” while also reaffirming his support for the “peaceful” Freedom Convoy protesters whose actions were pivotal in fighting government COVID mandates.

“My position is the same as it was before the Convoy arrived, the same as it was during and the same as it is now, which is this: I support those peaceful and law-abiding protesters who demonstrated for their lives and livelihoods and liberties while condemning any individual who broke laws, behaved badly or blockaded critical infrastructure,” said Poilievre while speaking in Vancouver on Wednesday.

Poilievre made the comments after being asked by a reporter what his thoughts are on the ongoing Emergencies Act inquiry taking place in Ottawa.

Poilievre was supportive of the Freedom Convoy early on and even skewered legacy media over their liberal bias. However, he was notably silent in opposing COVID mandates in 2021, unlike his fellow MP Leslyn Lewis, who on many occasions blasted lockdowns and mandates as harmful.

The Public Order Emergency Commission hearings into Prime Minister Justin Trudeau’s unprecedented use of the Emergencies Act against the Freedom Convoy began on October 13 and are expected to call at least 65 witnesses over six weeks, including Trudeau and many in his cabinet.

Unlike many Conservative MPs, during the Freedom Convoy, Trudeau’s Liberals took a decidedly anti-protest stance, with Trudeau himself saying that those opposing his measures were of a “small, fringe minority” who hold “unacceptable views.”

While Trudeau ultimately revoked the EA on February 23, under the EA, many Canadians who supported the Freedom Convoy were targeted by the federal government and even had their  bank accounts frozen without a court order.