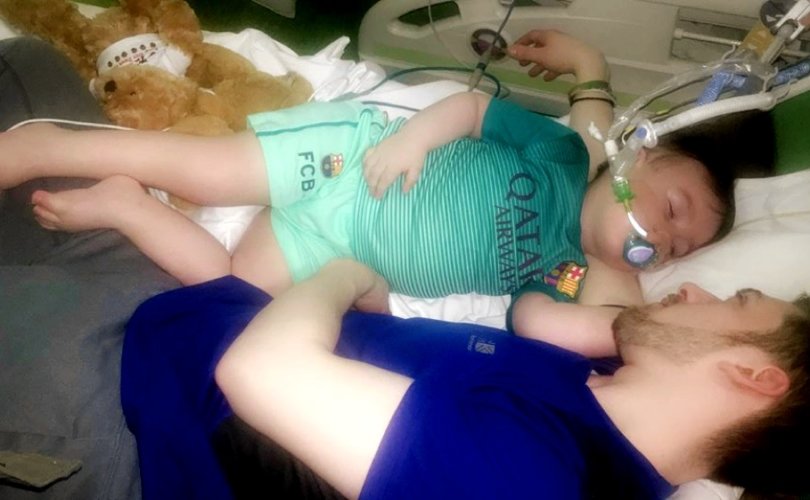 April 25, 2018 (LifeSiteNews) — Two prominent commentators from both sides of the Atlantic and the political spectrum are united in support for Tom Evans and and Kate James in their fight to take their son Alfie to Rome for treatment.

Liberal Piers Morgan, former CNN presenter and co-host of ITV’s Good Morning Britain, and conservative Rod Dreher, author of the Benedict Option and senior editor at the American Conservative both recently weighed in on the drama that has seized international attention.

After Alder Rey Hospital removed the toddler’s ventilator late Monday night, he unexpectedly began breathing on his own, against medical predictions.

According to latest reports, Alder Rey Hospital has since conceded to the entreaties of his parents and is giving Alfie oxygen, hydration and nutrition. His parents’ appeal of Judge Anthony Hayden’s Tuesday order refusing them permission to take Alfie to the Vatican’s Bambino Gesu Hospital is currently being heard in court.

“Sometimes miracles do happen,” declared Morgan, who is Catholic, but has publicly dissented from the Church’s teachings on abortion and homosexuality.

“If it was my child I would like the final say. Alfie’s parents want the final choice. Why shouldn't they be allowed that? Shouldn't love be the ultimate way?” he said, as reported by the UK Mirror.

“I feel incredibly sorry for Alfie Evans’ parents who have shown such extraordinary courage and determination.”

At least let his parents take him home to die, for goodness sake. He’s THEIR little boy, nobody else’s. #AlfieEvans

For his part, Dreher excoriated the British government in a Tuesday column.

Despite the Italian government being willing and ready to take the toddle at no cost to the British, the British National Health Service and the UK courts have declared Alfie’s life “unworthy of life,” and have essentially ordered his death, he wrote.

“In what sense is the UK government not euthanizing Alfie Evans?” asked Dreher.

“It is terrifying to me as a parent to think that the state could decide on its own that my sick child should die, even though he is not in pain, and even though his mother and I had made arrangements to have him cared for in another country, at no expense to the state,” he added.

Moreover, it “is becoming a post-humane nation,” added Dreher, including a tweet by canon lawyer and Catholic Herald contributing editor Ed Condon:

“Another country has offered to take Alfie in, grant him citizenship, and provide medical care for him at its own expense. And this is what Pope Francis has urged — and may God bless him for his heroic defense of Alfie’s life,” he wrote.