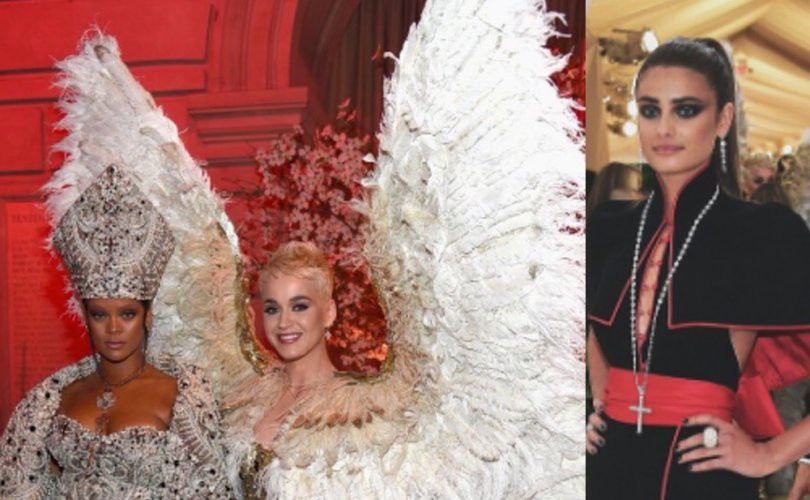 May 8, 2018 (LifeSiteNews) – Liberal commentator Piers Morgan has once again broken ideological ranks, this time penning a column expressing his disgust over how “a bunch of flesh-flashing celebrities” disrespected Catholicism with their sacreligious costumes at the Met Gala.

“I'm a Catholic,” Morgan wrote for the Daily Mail. “Not the most devout you'll ever meet, I'll admit. But I was brought up a Catholic – I even received not entirely successful spiritual guidance from nuns as a teenager! – and I still consider myself to be a Catholic. I know many people don't believe in any God or religion, let alone Catholicism, and I respect that. All I ask in return is for my beliefs not to be rudely disrespected.”

And the Met Gala costumes did just that, he wrote. Such costumes included sexualizations of the Blessed Virgin Mary, Rihanna dressed as a glitzy female pope, and a Victoria’s Secret model in a modified cardinal’s cassock with a slit up the side.

“A lot of the imagery was highly sexualised, which you might think not just inappropriate for a religious theme but also incredibly offensive to the many victims of sex abuse in the Catholic Church,” Morgan pointed out.

He wrote that Madonna “looked preposterous” and performed Like a Prayer at the after-party.

“When it first came out, Madonna enjoyed enraging Catholics by making a video featuring burning crosses, statues crying blood and her seducing a black Jesus,” he commented. “What a nice touch to have this blasphemous old crone returning in all her unedifying glory to insult us all over again.”

“Next year's Met Gala is going to have an ‘Islam’ theme,” Morgan wrote sarcastically. “Yes, guests in 2019 will be encouraged to wear skimpy, provocative dresses that ‘celebrate’ the Prophet Mohammad, Islamic clothing including hijabs and burqas, and the Koran. I can also reveal that the 2020 Met Gala will have a ‘Jewish’ theme. Yes, a bunch of celebrities and models will be posing for the world's paparazzi dressed in all manner of Jewish attire and regalia, including dressing up as Rabbis and wearing kippahs.”

“Oh, wait,” he wrote. “Those celebrities who took part in this offensive fiasco need to ask themselves one question: ‘Would I have gone dressed as a Muslim or a Jew if I were not Muslim or Jewish?’ If the obvious answer is ‘No, of course not’ then they should all be ashamed of themselves.”

Morgan seems to have picked up on the ongoing crisis in the Catholic Church, too. The Vatican loaned some of its sacred vestments to the Heavenly Bodies show – which are being displayed in the same exhibit as a rosary-covered bondage mask.

“Apparently – staggeringly – the Vatican gave permission for the Gala to be 'Catholic-themed' because it has already provided a variety of clothes and other items for an accompanying exhibition at the Met,” he observed. “To which my response is: what the hell was the Vatican thinking?”