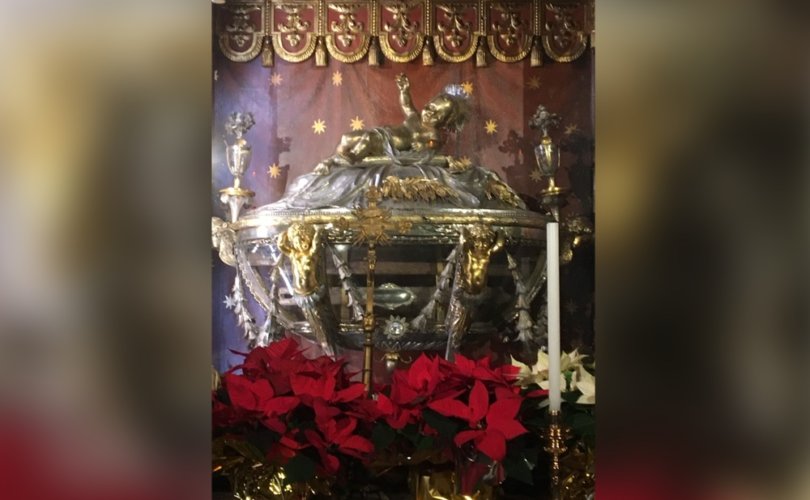 Reliquary of the manger at the basilica of St. Mary Major in RomeLouis Knuffke

(LifeSiteNews) – On January 6, Catholics celebrate the feast of Epiphany, when the Magi adored the baby Jesus and brought him gifts of gold, frankincense, and myrrh. The wood of Christ’s manger, in what has come to be known as Bethlehem of the West, can be seen and venerated by pilgrims visiting the Papal Basilica of Saint Mary Major in Rome.

According to Monsignor John Abruzzese, canon of the Basilica of St. Mary Major, “the relic arrived in the 7th century, in 650.” A few years before, in 636, due to the Saracen invasion of the Holy Land, St. Sophronius, Patriarch of Jerusalem, had been unable to celebrate Midnight Mass in the cave of Bethlehem, where according to tradition Christ was born.

“Because the relic was so precious,” Abruzzese told LifeSiteNews, the Patriarch “decided to ask the assistance of the pope, and they transferred it here for safe-keeping. Since then it’s been here, and we’ve guarded it through the centuries.”

The relic of the manger, in a crystal and silver reliquary under the high altar at the basilica, consists of five beams of woods, two of which, research has shown, would have stood upright to form an “X,” upon which the other three beams would have rested. These wooden beams would have supported a stone feeding-trough made of the same limestone which forms the cave of the Nativity itself in Bethlehem.

According to Abruzzese, “as a result of the investigations conducted by Father Lais, vice-director of the Vatican Observatory during the restorations of 1983,” the wooden beams of the manger “were found to be taken from a sycamore tree, of which there are several varieties in the Holy Land.” Above the wooden beams of the manger, adorning the top of the reliquary is a statue of the Christchild resting upon a pillow that sits on hay. The reliquary was built by Giuseppe Valadier (1762-1839), the last descendant of the family of Roman goldsmiths, to replace a Renaissance urn that was stolen by Napoleon’s troops in the 18th century.

The first Pope to build a shrine for the relic was Hadrian I (772-795), in a crypt grotto under the current Sistine Chapel of St. Mary Major. The crypt is similar to the Grotto of the Nativity in Bethlehem. The Sistine Chapel of the basilica was embellished by Domenico Fontana (1543-1607) with large statues of the nativity. Pius IV (1559-1565) restored the high altar, upon which the relics were exposed annually on Christmas Eve for the veneration of the faithful until recent years. Blessed Pius IX (1846-1878), on account of his devotion to the manger, commissioned the present crypt chapel, or Confession, under the main altar of the basilica.

The chapel includes a statue of Pius IX kneeling in adoration and looking up toward the main altar, to which the statue of the child Jesus in the reliquary also points with hand raised in blessing. According to Abruzzese, this is to signify that “Jesus comes during the Mass, so at every Mass it’s like Christmas. The mystery of Christmas is repeated; Jesus is born again, so to speak.”

In addition to the relic of the manger, the basilica holds the relic of the swaddling clothes mentioned in the Gospel of St. Luke, with which Mary wrapped the child Jesus in the manger (Luke 2:7). The basilica also displays in its Sistine Chapel the first statuary nativity commissioned after the live nativity of St. Francis of Assisi.

On November 22, 2019, Pope Francis sent a fragment of the manger to the Holy Land, where it was enshrined in St. Catherine Church, in Bethlehem. Every year during the Christmas novena, Mass is offered at the altar of the manger at St. Mary Major, and pilgrims can venerate the relic daily beneath the main altar in the basilica. Italy’s “super green pass” vaccine passport is not required to enter churches.