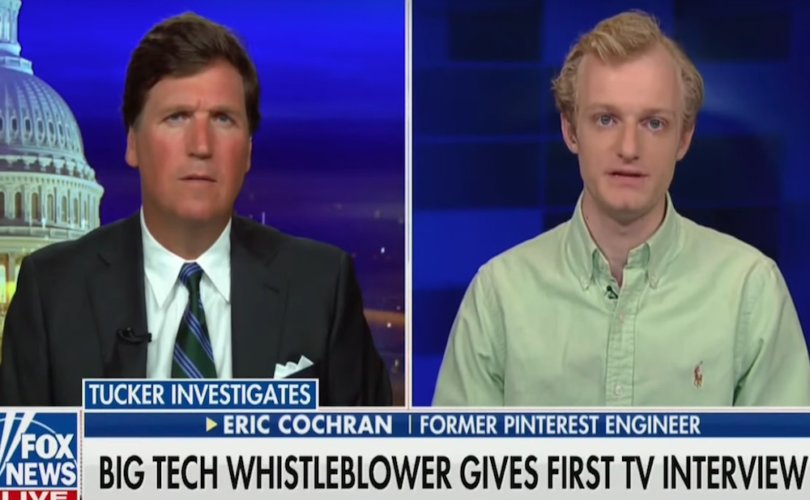 June 13, 2019 (LifeSiteNews) – The fired Pinterest employee who revealed that the social media platform had blocked the pro-life group Live Action under false pretenses appeared on Tucker Carlson’s Fox News show Wednesday evening to call attention to the dangers of online censorship like what he witnessed.

Earlier this week, the conservative investigative group Project Veritas revealed that Pinterest had added “https://LiveAction.org” to a filter meant to keep pornographic links from appearing on the platform. Days later, Pinterest banned Live Action outright, claiming the pro-life group violated its Community Guidelines by publishing “medical misinformation and conspiracies that turn individuals and facilities into targets for harassment or violence.”

“Security came up and found me, and I asked them, ‘hey what’s wrong, did I do something wrong?’ and they had no answers and they escorted me out of the building,” Cochran said. He fully stood by his actions “because I saw wrongdoing and the normalization of censorship between big tech companies,” which he called “downright un-American.”

“And I saw this as the fight for abortion,” he continued. “I saw a big tech company saying quietly, saying behind closed doors, that they believe that Live Action shouldn’t have a platform to speak. And the big thing is, I want them to have to say this explicitly. They need to say this publicly behind closed doors.”

Cochran argued that the incident presents “definitive proof” that various incidents of this kind over the years aren’t innocent technical errors on Big Tech’s part, but deliberate political discrimination.

“This is the watershed moment, Tucker, this is about abortion,” he declared. “You’re seeing it now with YouTube doing Pinterest’s bidding by removing the Project Veritas video, you’re seeing that they’re gonna do whatever it takes. They are 100% in to protect the abortion lobby.”

Cochran called on pro-life employees within the likes of Pinterest, Google, Facebook, Twitter, and YouTube to “come to Project Veritas” and “expose what’s going on. They need to make these tech companies, like I have, explicitly say that ‘we are on the side of the abortion lobby.’ Because then at least we know where we stand, we at least know what’s going to happen.”