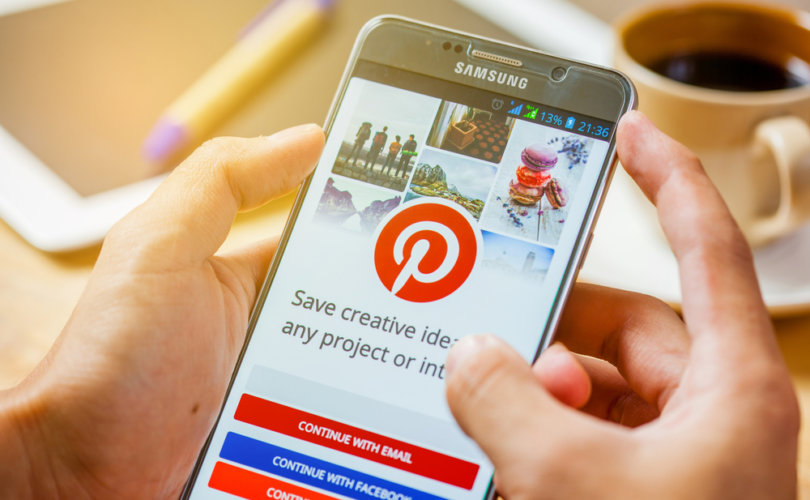 “We don’t allow harmful misinformation on Pinterest. That includes medical misinformation and conspiracies that turn individuals and facilities into targets for harassment and violence,” the Pinterest message read.

Pinterest’s move followed revelations that a high-level Pinterest employee put LiveAction.org on the list of blocked pornography sites in February 2019, as Centofante tweeted out also on Tuesday:

Live Action employees confirmed that “as of Sunday,” they could not create pins linking to LiveAction.org.

“Only on Monday, after Project Veritas reached out to Pinterest letting them know of the whistleblower’s claims and asking for comment, were pins able to link to LiveAction.org,” it reported.

“Based on the evidence provided, it appears that Pinterest intentionally added ‘LiveAction.org’ to a ‘pornography’ blocklist in an effort to suppress our pro-life content from being shared on the platform,” she said.

“By secretly applying the label of 'pornography' to Live Action’s pro-life content, Pinterest demonstrates a concerted effort to sideline a leading pro-life organization the only way they knew how. This does not appear to be a simple mistake. When confronted with an appeal, their employees doubled down and kept LiveAction.org on the pornography list. What exactly is Pinterest attempting to block? Inspirational messages to pregnant mothers, ultrasound images showing the science of prenatal development, medically accurate information on the abortion procedure, and images saying women deserve better than abortion industry leader Planned Parenthood,” she continued.

“Pinterest has targeted Live Action, I believe, because our message is so effective at educating millions about the humanity of the preborn child and the injustice of abortion. Pinterest says that their mission is to “help empower people to discover things that they love,” but despite the fact that millions of people love babies and the pro-life cause, they are secretly censoring our life-affirming messages. Pinterest users deserve to know the truth and our messages deserve to be treated fairly. If Planned Parenthood can promote their message on Pinterest, then Live Action should be able to as well,” she added.

“Pinterest Logic: You can freely pin if you’re Planned Parenthood, an abortion provider. But if you’re a pro-life group & pin about the beauty & humanity of a baby in the womb, you’re banned and seen as a threat to 'Pinner’s health or safety,'” she said.

At least one Live Action critic denounced Pinterest for censorship.

“While I oppose Live Action with every fiber of my being, I don’t support this social media ban,” tweeted Dr. Eugene Gu. “What happens if Pinterest or any other site is bought out by Republicans? They can do the same thing right back. I hate having to defend my enemy but social media censorship is wrong.”