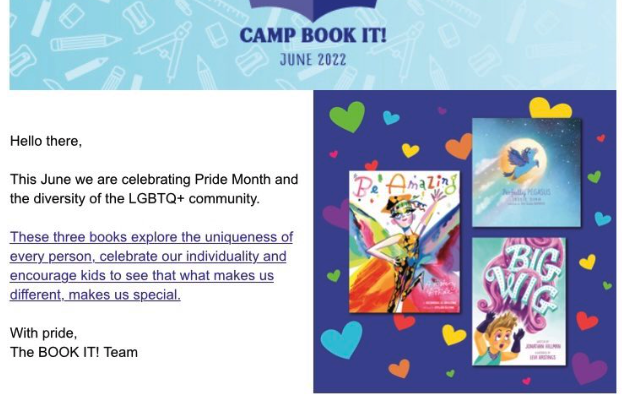 “[Pizza Hut] sponsors a program which incentivizes kids in PreK-6th grade to read books. This week, one of their suggested books is ‘Big Wig.’ A book about a child who becomes a drag performer,” Libs of TikTok shared last Thursday.

.@pizzahut sponsors a program which incentivizes kids in PreK-6th grade to read books. This week, one of their suggested books is “Big Wig.” A book about a child who becomes a drag performer. pic.twitter.com/5FTQC5ubCo

According to Simon & Schuster, “Big Wig” is an “irrepressible” piece of work that “celebrates drag kids, individuality, and self-confidence from the perspective of a fabulous wig!”

On Book It’s website, the Pizza Hut-sponsored group explains that “This June we are celebrating Pride Month and the diversity of the LGBTQ+ community. These three books explore the uniqueness of every person, celebrate our individuality and encourage kids to see that what makes us different, makes us special.”

In addition to the “drag kid” book “Big Wig,” Book It also recommends that kids in pre-K through first grade read “Be Amazing: A History of Pride,” written by “Desmond is Amazing,” a young boy who has been heralded in the mainstream media as a drag performer.

For slightly older children, in grades one through three, Book It recommends, “Pride: The Story of Harvey Milk and the Rainbow Flag” and “Stonewall: A Building. An Uprising. A Revolution.”

The news made waves on social media, with many reacting in shock and dismay that the longstanding pizza company would be involved in the promotion of such controversial material.

“I will no longer eat PizzaHut,” reacted Breitbart’s Wendell Husebø.

I will no longer eat PizzaHut

America today makes Sodom and Gomorrah seem like it was populated with Puritans.

Previously apolitical companies engaging in the promotion of LGBT ideology seems to be on the rise in America, sparking concern among parents about what their children are being exposed to.

Earlier this year, Florida Gov. Ron DeSantis signed a bill prohibiting teachers from talking to young children about sexuality and gender, leading media giant Disney to out itself as in favor of pushing radical gender ideology on children.

Since then, the company’s share value has dropped by more than a whopping $50 billion, with conservatives using the term “go woke, go broke” as a way to warn other companies that adopting radical viewpoints will only serve to harm them financially.