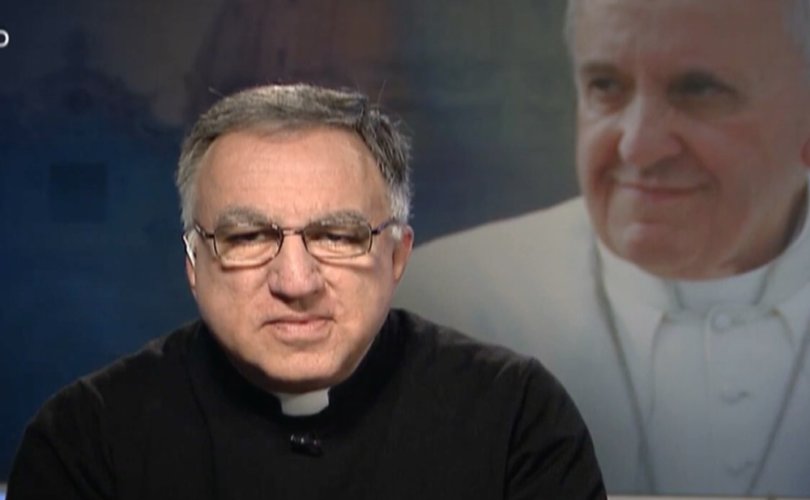 TORONTO, February 25, 2019 (LifeSiteNews) – Instances of plagiarism by disgraced Vatican spokesman Father Thomas Rosica, C.S.B., have now been traced back as far as 1991. He plagiarized not only in newspapers and blogs but also in peer-reviewed academic journals.

Last week Rosica admitted that he plagiarized, telling the National Post that he “relied too much on compiled notes.” He also said that he, in the words of the National Post article, “relied on material prepared by interns.”

“It could have been cut and paste,” he said.

But now instances of plagiarism have been found going back 28 years, well before he had interns, and even before cut and paste was widely available with the advent of the internet.

“The early date (1992) and academic nature of this heavily plagiarized work suggest that Fr. Rosica’s current problems cannot be chalked up simply to careless interns or accidentally copying & pasting text from online,” tweeted Mathew Block of one of Rosica’s essays this morning. “The pattern of plagiarism goes back decades,” he added.

Rosica resigned today from the Collegium, one of the governing councils of the University of Saint Michael’s College in Toronto.

This weekend Professor Joshua Hochschild of Mount Saint Mary University revealed on Twitter that Rosica had plagiarised material for his 1994 essay “The Road to Emmaus and the Road to Gaza: Luke 24:13-35 and Acts 8:26-40,” in Worship, vol. 68 (1994).

Hochschild identified a passage in Rosica’s Worship article as the intellectual property of Jerome Neyrey, SJ, first published in his Resurrection Stories in 1988.

The philosophy professor subsequently discovered that Rosica had also used unacknowledged work in his essays “Child of Light, Prince of Peace” and “In Search of Jesus; The Emmaus Lesson”. The former was published in The Bible Today in November 1991 and the latter in the Spring 1992 edition of the now-defunct journal Church.

“It wasn't hard to find one example in each. I haven't looked for more, so I'm not making a claim about the extent of the plagiarism,” Hochschild tweeted.

“Taken individually, these might seem small, but the fact I found them so easily, together with the already established pattern of Rosica's plagiarism, means I would be surprised NOT to find more extensive copying and pasting upon further inspection,” he later added.

On Sunday Mathew Block, editor of the Canadian Lutheran, tweeted he was “distressed” to discover that there were 13 incidences of unattributed work in Rosica’s 1992 “In Search of Jesus: The Emmaus Lesson.”

Rosica had taken ideas, phrases and even a passage from the late Fr. Joseph Plevnik, SJ, a biblical scholar who taught for many years at Toronto’s Regis College. Boston College professor Pheme Perkins and Walter L. Liefeld of Trinity Evangelical Divinity School were among the other scholars whose work Block identified in Rosica’s essay.

Block told LifeSiteNews via social media that his interest in the Rosica case was rooted in love for the truth.

“I gather that there are some differences of opinion in Catholic circles about Fr. Rosica,” he wrote.

“Frankly, I know very little about that: I’m a Lutheran. But I am interested in uncovering the truth,” he continued.

Block added that he was grateful that Fr. Rosica had apologized following earlier reports of plagiarism but also that he was surprised by the priest’s suggestion that they could be explained as mistakes made by interns or through accidental copy-pasting.

“The extent of plagiarism I had identified in works by Fr. Rosica in major Canadian news media spanning well over a decade made that seem doubtful to me,” Block stated.

The Canadian Lutheran editor indicated that it was Professor Hochschild’s discovery of Rosica’s academic plagiarism that inspired him to examine the Rosica article published by the now-defunct journal Church.

“My fears were confirmed when, on February 23, Josh Hochschild identified several instances of plagiarism in a 1994 academic work by Fr. Rosica,” he told LSN.

“I consequently decided to do an in-depth examination of just one academic work by Fr. Rosica—a 1992 piece entitled ‘In Search of Jesus: The Emmaus Lesson.’ I was distressed to discover that it too was heavily plagiarized.”

Not so much theft but fraud

Hochschild told LifeSiteNews that he had taken interest in the Rosica case because he cares about the integrity of the Catholic Church.

“I’m a Catholic and an academic,” he said over the phone from Maryland. “It’s primary as an academic, but I’m also a person who is concerned about integrity in the Church.”

In explaining why academics find plagiarism so contemptible, Hochschild said that “theft” was the wrong metaphor for explaining why plagiarism is wrong. People sometimes don’t mind having their work used without credit. The real crime is against the plagiarist’s readers.

“It’s fraud,” Hochschild said. “The problem is that you’re representing yourself in the voice of someone else.”

In a subsequent email to LSN the professor elaborated further.

“Intellectual work depends on relations of trust,” he wrote.

“Academics are expected to be honest and clear about how they engage and draw on others’ ideas. Many conventions of academic writing are developed to give credit to others and to carefully document how one arrived at one’s ideas.”

This morning Fr. Donald McLeod, CSB, the Chair of the Collegium of the University of Saint Michael’s College, announced that Rosica, who was on the governing body, has stepped down.

The question now is what the other academic institutions that have heaped honors on Rosica will do. Hochschild believes that there will be a push for these institutions to “distance themselves” from his deeds.

“I believe each institution needs to reflect on this in light of their traditions and missions, but many people will expect them to strongly distance themselves from his behavior (including depriving him of titles and degrees), not primarily as ‘punishment’ but to reinforce their standards for their constituents, present and future,” he stated.

The Salt + Light Media chief’s habitual plagiarism came to light after Professor John Rist informed LifeSiteNews that the Basilian Father had slandered Vatican whistleblower Archbishop Viganò in a lecture he gave at Cambridge University earlier this month. LSN’s examination of Fr Rosica’s remarks revealed that he had misappropriated the words of at least five other men.