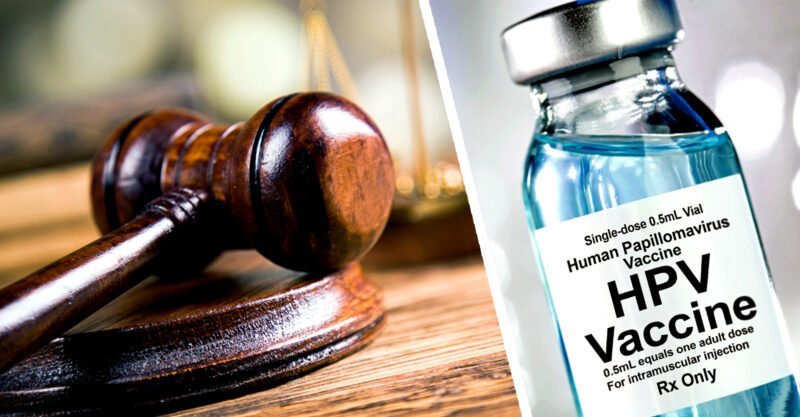 (Children’s Health Defense) – A judicial panel on August 4 issued an order consolidating more than 31 lawsuits brought against Merck & Co. for injuries allegedly caused by its Gardasil human papillomavirus (HPV) vaccine. The panel was “not persuaded” by Merck’s argument that consolidating the cases would increase vaccine hesitancy and cause a flood of “meritless” vaccine injury claims.

The lawsuits against Merck allege the pharmaceutical giant fast-tracked Gardasil through the U.S. Food and Drug Administration’s (FDA) approval process and deceptively conducted clinical trials to mask serious side effects and exaggerate the vaccine’s effectiveness.

The U.S. Judicial Panel on Multidistrict Litigation said the individual lawsuits involve common questions of fact, and that “centralization in the Western District of North Carolina will serve the convenience of the parties and witnesses and promote the just and efficient conduct of the litigation.”

“These personal injury actions present common questions of fact arising from allegations that plaintiffs, or their minor children, developed postural orthostatic tachycardia syndrome (POTS) and various other injuries as the result of an autoimmune reaction to the Gardasil vaccine, which is recommended for the prevention of certain strains of the human papillomavirus and various cancers.”

The lawsuits consist of product liability claims, claims for breach of warranty, fraud, negligence, and in some cases, violations of state consumer protection laws.

“Discovery in all cases can be expected to focus on the testing, labeling, regulatory approval and marketing of Gardasil,” the judicial panel wrote.

“Centralization will eliminate duplicative discovery and prevent inconsistent pretrial rulings – particularly with respect to pre-emption issues under the National Childhood Vaccine Injury Act and Daubert issues – and will preserve the resources of the parties, their counsel and the judiciary.”

According to the order, after the motion for consolidation was filed, the panel was notified of nine other potentially related actions in six additional districts.

U.S. District Court Judge Robert J. Conrad, Jr., in 2007, was appointed to the Western District of North Carolina by President George W. Bush and will preside over the consolidated cases.

“Over the past year of intensive discovery, we’ve been able to show that Merck, manufacturer of the Gardasil vaccine, was aware that there was an unacceptable risk of neurological disorders, autoimmune diseases and particularly postural orthostatic tachycardia syndrome, also known as POTS,” Robert F. Kennedy Jr., chairman of Children’s Health Defense, said in a video.

The consolidation of all Gardasil cases in the U.S. into a single courtroom means that every child and every adult injured by the Gardasil vaccine can now argue their cases in front of a single federal judge, Kennedy said.

Merck argues cases should not be consolidated

According to the order, Merck opposed consolidating the lawsuits on several grounds. First, Merck argued that “individual issues in the cases will predominate” if the cases are consolidated, but the judicial panel was not persuaded.

“In this litigation, all plaintiffs allege that they were injured by the Gardasil vaccine in the same manner – through an autoimmune reaction caused by structural similarities between proteins in the vaccine’s antigens and within the vaccine recipient’s own cells. In view of the common issues arising from these allegations, we conclude that centralization will provide significant efficiencies,” the panel wrote.

Merck also argued informal coordination among parties of the lawsuits “has been, and would continue to be, practicable,” but the panel found “efforts to date by Merck and movants’ counsel to coordinate in a limited number of actions appear to have been only partially successful at best.”

Finally, Merck argued consolidation of the claims subject to the “Vaccine Act” would be “unprecedented” and “would attract a flood of meritless claims brought solely for the purpose of exhausting the claim process under the Vaccine Act and proceeding with tort claims in court.”

Merck was referring to the fact that claimants bringing the lawsuits were first required to go through the National Vaccine Injury Compensation Program (NVICP), established by the National Childhood Vaccine Injury Act, before they could file their claims in an actual court of law.

The NVICP is a special, no-fault tribunal housed within the U.S. Court of Federal Claims that handles injury claims for 16 federally recommended vaccines. To date, the court has awarded more than $4 billion to thousands of people for vaccine injuries, despite the system’s shortcomings.

In the NVICP, America’s legal system is replaced by a “special master.” The special masters who review claims are government-appointed attorneys, many of whom are former U.S. Department of Justice (DOJ) attorneys.

Under the NVICP, the parents of vaccine-injured children are forced to sue the secretary of the U.S. Department of Health and Human Services (HHS) for compensation. HHS is represented by DOJ attorneys.

It is exceptionally difficult to obtain compensation within the NVICP. The proceedings are often turned into drawn-out, contentious expert battles and the backlog of cases is substantial. Because of this, a single case can drag on for over a decade.

Payouts, including attorneys’ fees, are funded by a 75-cent tax per vaccine. There is a $250,000 cap on pain and suffering and death benefits.

Persons claiming injury from a covered vaccine may not sue the vaccine manufacturer or the healthcare provider that administered the vaccine in state or federal court unless they have exhausted the claim process in the Court of Federal Claims.

Merck asserted such claims would “overwhelm the already overburdened claim process” resulting in an “improper evasion of the intended purposes of that process.”

The panel was not convinced. The judicial panel said:

The Vaccine Act expressly permits claimants to file suit against vaccine manufacturers in federal court after exhausting the required claim process, and nothing in the Act […]  forbids centralization of such actions.

Nor are we convinced by Merck’s argument that the creation of an MDL [multi-district-litigation] will encourage the filing of meritless claims, as any such claims are more appropriately brought to the attention of the transferee court.”

The court said concerns about the efficient functioning of the Vaccine Court and vaccine hesitancy are “properly raised elsewhere.”

The panel’s job, they said, was to determine if the litigation involved “common questions of fact” and whether centralization of the litigation would serve the convenience of the parties and witnesses, and “produce efficiencies for the litigants and the judiciary.”

According to a press release, lawyers from the firm Baum Hedlund Aristei & Goldman in April 2022, filed a motion to consolidate 30 vaccine lawsuits pending in district courts throughout the U.S.

As of July 28, the law firm said 48 cases were pending with at least 100 more to be filed in federal court.

In their motion for consolidation, attorneys said the central question of all of the cases was whether Gardasil can cause autoimmune disorders, whether Merck adequately warned of the vaccine’s risks, and whether Gardasil caused the plaintiff’s injuries.

“We are very pleased the JPML [U.S. Judicial Panel on Multidistrict Litigation] decided to centralize the Gardasil litigation,” said Bijan Esfandiari, Gardasil lawyer and senior shareholder at Baum Hedlund. “Efficient coordination of the multidistrict litigation makes the most sense and gives the plaintiffs the best path for seeking and obtaining justice. Our clients are looking forward to getting their day in court.”

Esfandiari, whose firm represents young men and women across the country who allege serious injuries from Gardasil, said some of the most common side effects alleged in the HPV vaccine lawsuits include:

According to the press release, Judge Conrad will likely schedule a conference in the near future and establish procedures for the selection of lead and co-lead counsel for the Gardasil multi-district-litigation along with the selection of the executive committee, steering committee and other positions. The court will also issue various orders on how discovery is to proceed and establish deadlines.

Attorneys anticipate the trial against Merck over its Gardasil vaccine will begin in 2023.