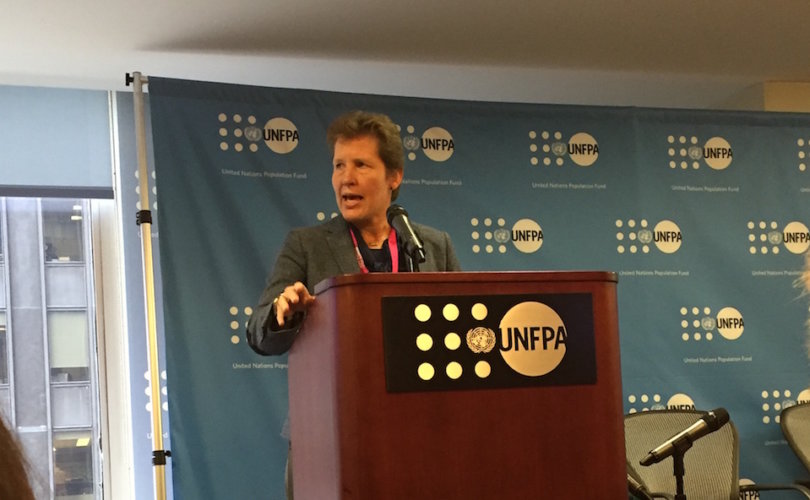 'We will champion the adolescent girl’s sexual and reproductive health and rights in all its forms,' says Plan International CEO Anne-Birgitte Albrectsen.Lianne Laurence / LifeSiteNews

NEW YORK, March 31, 2016 (LifeSiteNews) — Plan International, traditionally a child sponsorship program, is transforming itself into a global “girls’ rights organization” that will lobby for the “sexual and reproductive health and rights” for the “girl-child,” says its CEO Anne-Birgitte Albrectsen.

Formerly a politician in her native Denmark and an international diplomat with a law degree, Albrectsen took the helm at Plan International in September 2015, leaving a top-drawer position as UN Assistant Secretary General and Deputy Executive Director for Management at the UN Population Fund (UNFPA) to do so.

That, “I’m proud to say, will probably then quickly make us the world’s largest INGO for girls’ rights,” she said. “And we will champion the adolescent girl’s sexual and reproductive health and rights in all its forms.”

The “key point in the girl-child’s life” is “the day she gets her period,” stated Albrectsen.

That’s the day “she gets taken out of the safety of her own space and put into adulthood,” and “that’s where we lose some tremendously important investment, and where we kill the potential and aspiration of the girl.”

Women’s movement let down the girl-child

Albrectsen made her remarks at a March 15 UN side event on “Adolescent Sexual Reproductive Health Rights and its role in achieving gender equality” which was co-sponsored by the Canadian government, International Planned Parenthood, the UNFPA, and Plan International.

“The women’s movement have let down the girl-child,” Albrectsen said.

But “now we have the chance to make that mistake right, or right that mistake,” she added, “by continuing to keep the focus on the adolescent girl throughout all the SDG [sustainable development goals] framework, and particularly around sexual and reproductive health.”

Indeed, the theme of CSW60 is “Women’s empowerment and its link to sustainability” — or in UN terms, to the SDGs that 193 countries signed on to at the World Development Summit in September 2015.

Those 17 goals and their 169 targets map out the UN’s Agenda 2030, which aims to end world poverty and preserve the environment in the next 15 years.

While the SDG agenda is a “fantastically powerful global frame that puts the girl-child where she belongs, at the centre of global development,” Albrectsen said, “what really worries me today” is “what we won’t be measuring under the SDGs.”

That means that “there are millions of girls in the world that become mothers when they’re children, and we don’t count them,” she said.

“We have a whole cohort of invisible girls, invisible mothers, that because they are invisible, are also denied every single aspect of the rights enshrined to them under the Cairo platform of action.”

Albrectsen’s mention of the Cairo action agreement is significant.

The Cairo 1994 UN population conference gave UNFPA its steering document, and according to Stefano Gennarini, Director of Legal Studies of the Center for Family and Human Rights (C-Fam), the phrases “sexual and reproductive health, care, or services” within the Cairo document, or ICDP Programme of Action, “by definition include abortion, except where the law protects the unborn.”

“While the [Cairo] agreement expressly excludes an international right to abortion, it is having the effect, gradually and over time, of depriving children in the womb of any protections at all under international law,” Gennarini told LifeSiteNews.

Plan International is “at the coalface”

“Plan [International] is at the coalface in a sense,” she said. “We’re with communities, living in communities around the world, with girls.”

That allows Plan International to “capture the lived realities, do programs, find solutions for real issues” that it then brings “to the UN, that we bring to national governments, that we bring to bi-laterals, to the corporate sectors.”

Albrectsen also followed up on another panelist’s lauding of General Comment 22 on the right to sexual and reproductive health, released March 8 by the UN Committee for Economic, Social and Cultural Rights, which states that physicians must give effective referral for procedures they object to, and claims abortion is part of the right to health.

While C-FAM’s Gennarini and other pro-family groups denounced the General Comment as deceptive and non-binding, pointing out there is no UN treaty right to abortion, UN apparatchiks and abortion activists have been leveraging this misleading GC-22 to push their agenda.

Or as Albrectsen said: “Every time the treaty bodies meet to monitor the progress on human rights, on child rights, on sexual and reproductive health and rights, they actually create new mandates, and that’s the positive part of it.”

“But all these mandates are under-funded, under-monitored, under-reported on,” she added. “So the real message is you’ve got to invest in the mandates that we all hold so dear.

She exhorted attendees to “call things as they are.”

“We’re all working in this space where, frankly,” everyone knows the acronym SRHR stands for sexual and reproductive health and rights.

“Yeah, we know what that is, but what’s it about?” Albrectsen said. “It’s about girls, it’s about menstruating girls. It’s about the right to your own body. It’s about teachers that abuse students in school.”

“Let’s talk about the real issues and get them out there, and mobilize around the lived realities of girls and boys in communities, and get those voices out.”

Plan Canada’s website states that in 1968, “Foster Parents Plan of Canada was incorporated into the Plan family which, by the 70’s, became known as Plan International.”

Plan Canada launched the “Because I am a Girl initiative” in Canada in 2009 “to promote gender equality in the countries where we work.”