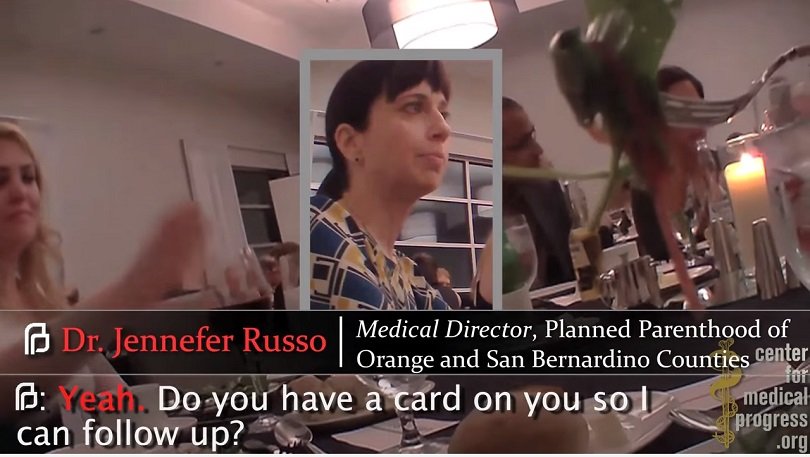 IRVINE, California, March 2, 2016 (LifeSiteNews) – Once again, the setting is a lunch table.

A new undercover video released by the Center for Medical Progress reveals that a California Planned Parenthood affiliate alters the abortion procedure, sometimes delivers children “intact,” and provides fetal organs to a company that charges $750 for babies' brains.

Undercover investigators learned many of the gruesome details from Dr. Jennefer Russo, the medical director at Planned Parenthood of Orange and San Bernardino Counties. She also performs abortions up to 24 weeks.

Dr. Deborah Nucatola recommended the investigators, who posed as purchasers for a biologics firm, contact Russo during a business luncheon captured on film and released last July.

In that, CMP's first video, Dr. Nucatola describes altering the abortion to a “less crunchy” procedure as necessary to harvest the requested organs. “I’m gonna basically crush below, I’m gonna crush above, and I’m gonna see if I can get it all intact,” she said.

The method she described using may be the partial birth abortion procedure, a federal felony punishable by two years in prison and a fine of $250,000.

When CMP Project Lead David Daleiden asks Russo about whether her Planned Parenthood affiliate performs a similar abortion procedure, Russo affirms, “Yeah, we like to do that, too.”

During the eight-minute-long video shot last February 27, Russo adds that the abortionists are not injecting unborn children with Digoxin, a poison intended to “assure fetal demise” before the child's removal from the womb. “We don't 'Dig' right now,” Russo says. “There's a nationwide shortage of Dig[oxin].”

Dr. Russo says that although her abortionists are trained to try to avoid delivering a child intact, “It happens sometimes.”

Delivering an “intact” child whose life has not been ended by injection may violate the Born Alive Infant Protection Act.

Later in the video, CMP investigators place a call to a Da Vinci sales representative, who confirms the specimens the company sells are free of Digoxin.

“It is feticide-free, considering that we have such a large catalogue of fetal tissue,” the representative says. “I believe that would be a requirement for us, in order to have so many fetal products available.”

Invoices CMP produces show DaVinci charging $350 for a fetal liver, $500 for fetal thymus, and $750 for an aborted baby's brain.

The sale or purchase of human fetal tissue for “valuable consideration” is a federal felony punishable by up to 10 years in prison and a fine of up to $500,000.

The two sister biologics companies have been partnered with the local Planned Parenthood chapter since at least 2008. Planned Parenthood Orange & San Bernardino Counties’ 2008-2009 Annual Report lists Da Vinci Biosciences as a major financial donor, having given the affiliate between $1,000 and $2,499 that year.

The video was released late Tuesday night, just hours before a Select Panel of the House of Representatives will hold its first hearings on the issue of bioethics and human organ trafficking, and the Supreme Court will hear oral arguments in its first major case dealing with abortion in more than a decade.

“As the Supreme Court prepares to hear a landmark abortion business regulation case, Planned Parenthood’s baby parts scheme sends an urgent message about the critical need for states to have strong regulatory authority over the abortion industry,” Daleiden said.