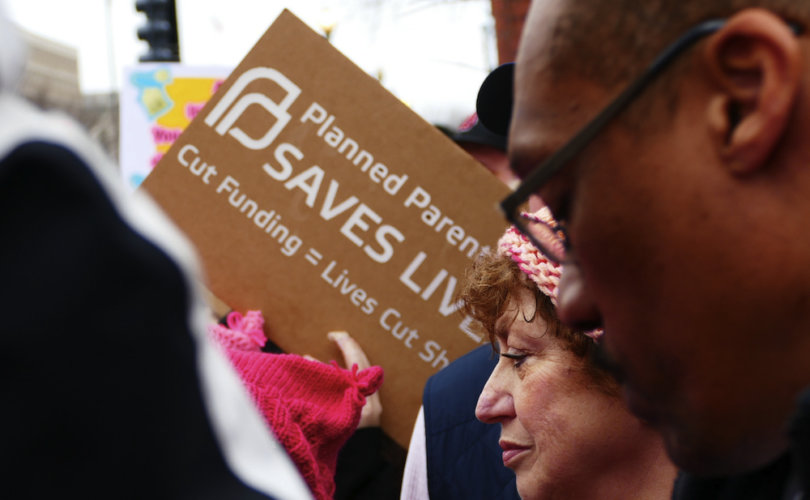 WASHINGTON, D.C., April 27, 2017 (LifeSiteNews) – As conservative support grows for legislation to defund Planned Parenthood and repeal Obamacare, the abortion giant continues to express indignation that its millions in federal subsidies are at risk.

“The federal government is now in the hands of extremist lawmakers who have tried for years to shut down Planned Parenthood health centers and cut patients off from care,” Planned Parenthood tells supporters invited to sign its electronic form letter to Congress. “Sign your name and say you stand with Planned Parenthood and are ready to fight like hell to protect reproductive health and rights.”

The nation’s largest abortion chain sent a marketing email Wednesday afternoon after news broke that the Freedom Caucus of conservative Republicans in the U.S. House announced it had taken an official position in support of the current version of President Trump’s healthcare bill.

“Back, and worse than ever,” Planned Parenthood’s email subject line read, “Urgent: House Republicans just brought back their dangerous health care legislation. We can’t let it get one step further.”

“This isn't the first — or even fourth — attack on reproductive health we've seen from politicians in Congress and the White House this year,” Planned Parenthood Federation of America (PPFA) President Cecile Richards said in the email. “The reinstatement and expansion of the global gag rule, voting away essential protections for the Title X family planning program, gutting international family planning funds — the all-out war on women and families in this new administration has been unprecedented.”

ObamaCare advocates and Planned Parenthood have mutually supported each other’s causes, including Richards, who has publicly plugged the law for years.

The Freedom Caucus chairman said that while the revised version of American Health Care Act (AHCA) still does not fully repeal Obamacare, the group is prepared to support it to keep its promise to the American people to lower healthcare costs.

“We look forward to working with our Senate colleagues to improve the bill,” Rep. Mark Meadows, R-N.C., said in a statement. “Our work will continue until we fully repeal Obamacare.”

The Freedom Caucus’ opposition to the AHCA’s first version is considered a factor in the law’s defeat, but it remains to be seen whether having the group on board for the new proposal will ensure its success. More moderate Republicans still have to weigh in.

Family Research Council (FRC) announced Monday that it will score in favor of the modified AHCA, “because it provides the best path forward to re-establish the fundamental federal policy that abortion is not healthcare, to redirect funding away from Planned Parenthood, and to provide American families improved health insurance options.”

“We applaud the conservative Members of Congress that have been working to ensure the replace portion of the repeal bill is both pro-life and pro-family,” FRC President Tony Perkins said in a statement. “The measure not only reapplies to federal healthcare law the principle contained in the Hyde Amendment that abortion is not health care and should not be subsidized, but it also contains significant steps to reduce healthcare premiums.”

Planned Parenthood encouraged supporters in its marketing email to contact Congress on its behalf. The language in its electronic form letter couched the abortion business as healthcare provider under political attack.

Planned Parenthood’s PAC took to Twitter to assail the GOP’s latest version of the AHCA there as well.

The social media post directed readers to a landing page coaching supporters on how to protest “simply the worst legislation for women’s health in a lifetime.”

Planned Parenthood’s email and social media entreaty also comes as another Center for Medical Progress (CMP) video has been released showing a Planned Parenthood executive previously seen in the videos to be joking about getting a Lamborghini while bartering for aborted baby body parts. In the latest video, she states that she's “committed” to selling the remains of aborted children and “I think it’s a great idea.”