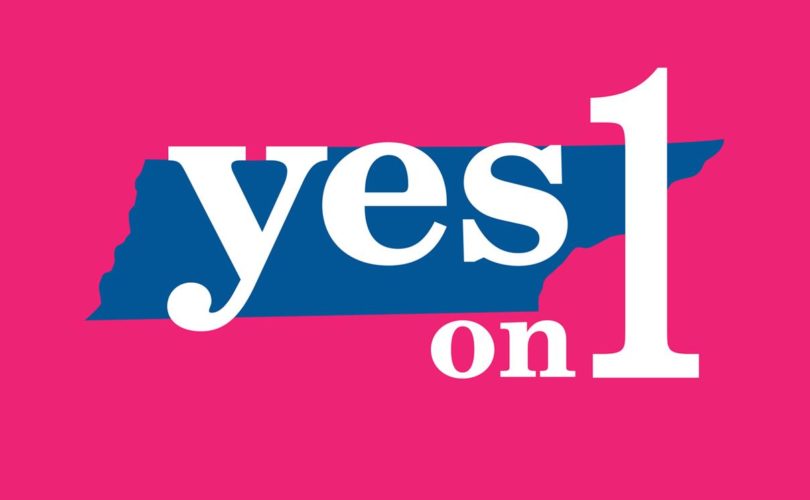 The lawsuit claims that the vote tally was miscounted, because, by their interpretation, Tennessee’s constitution only allows votes on a proposed amendment by those who voted for governor. There were more votes on Amendment 1, however, than there were in the governor’s race, so, they claim, those extra votes should not have been included.

Though the lawsuit itself shows that four members of Planned Parenthood of Middle and East Tennessee’s (PPMET) board are plaintiffs, including board chairperson Tracey George, the organization declined to comment. A spokesperson told LifeSiteNews that the lawsuit is being brought by private citizens, and Planned Parenthood was both uninvolved and did not know the lawsuit's details.

At issue is how to interpret Article XI, Section 3 of the Tennessee Constitution, which says, “And if the people shall approve and ratify such amendment or amendments by a majority of all the citizens of the state voting for governor, voting in their favor, such amendment or amendments shall become a part of this Constitution.” The plaintiffs say this means only those people who voted for governor can also vote for the amendment.

The lawsuit says that some voters had their 14th Amendment rights violated because the plaintiffs and others voted both against Amendment 1 and in the gubernatorial race on November 4, while supporters allegedly did not. It also accuses the state of misreading the Constitution, and of “[counting] the votes on Amendment 1 without first establishing whether each yes voter met Section 3's threshold of having also voted for governor.”

It also alleges that amendment supporters encouraged Tennesseeans to vote incorrectly, by voting on the amendment but not for a gubernatorial candidate. “In this misguided scheme, voters in favor of Amendment 1 intentionally voted for Amendment 1 while declining to participate in the governor's race. The apparent intent was to add yes votes without increasing the number of votes needed to surpass a majority of votes cast in the governor's race.”

Supporters of Amendment 1 say the lawsuit is misguided. Tennessee Right to Life president Brian Harris said on Saturday that “even if you wrongly discount those who may have voted for Amendment 1 but not in the Governor's race, there is still a margin of almost 20,000 votes in favor of the amendment.”

The “Yes on 1” campaign, for which Harris serves as a coordinator, released a statement saying that the differential between the vote totals for governor and for the amendment — 32,570 — are irrelevant because the amendment was supported by 52,446 more supporters than opponents.

“Even if you disqualify the number of Amendment 1 votes not voting in the Governor's race but who cast a vote for or against the amendment, YES on 1 still enjoyed a margin of 19,876 votes above the number needed for approval,” says the group.

On Sunday night, Tennesseean columnist Frank Daniels wrote that “Blake Fontenay, director of communications for the Secretary of State, told me on Oct. 30 that, to his knowledge, Tennessee had never interpreted Article XI, Section 3 to mean that only voters who cast a ballot in the governor's race were eligible to vote on constitutional amendments.”

Daniels also wrote that “regardless of your position on Amendment 1 or 2, we should welcome resolution in this suit.”

The lawsuit's legitimacy has, in the eyes of some, been complicated by the fact that four of the plaintiffs are on PPMET's board of directors. Lead plaintiff Tracey George is the board's chairperson, while Ellen Clayton, Mary Hayes, and Deborah Webster-Clair are voting members.

Most of the other plaintiffs have ties with Planned Parenthood and other anti-life groups. Teresa Halloran donated $104 against Amendment 1, Meryl Rice has donated money at least once to Planned Parenthood, and Jan Liff is affiliated with the League of Women Voters of Nashville.

According to pro-life blogger and reporter Jill Stanek, these ties make Planned Parenthood's statement of neutrality hard to believe. “Planned Parenthood may say it's not officially suing to overturn the will of the voters,” she told LifeSiteNews, “but with four board members and at least one donor, it's hard to take its claim of neutrality at face value.”

The lawsuit itself, as well as Daniels' column and an Associated Press article, failed to note the abortion industry ties of the plaintiffs. The AP identified George and the rest as “plaintiffs,” while the lawsuit and Daniels identify George and Clayton by their professorial titles at Vanderbilt University. Daniels told LifeSiteNews that he was unaware of the affiliations of George, Clayton, and the other two Planned Parenthood board members until after his column was published.

“Rather than accept defeat, Planned Parenthood and the nation's pro-abortion movement are willing to disenfranchise Tennessee voters in order to ensure that Tennessee remains an abortion destination with uninspected, unlicensed abortion facilities,” said Harris.

PPMET did not respond to a follow-up request for clarification from LifeSiteNews. Daniels, who told LifeSiteNews that he identifies as a libertarian who personally opposes abortion but supports its legality, wrote that the election has forced him to “question whether Tennesseans care much for the individual protections and liberties…enshrined by the framers in the state's governing document.” Daniels told LifeSiteNews that voter approval of Amendment 1 and Amendment 2 — the latter of which changed how the state chooses judges — created this concern.

One in three: Pro-life ballot measures lose, and win, and lose nationwide