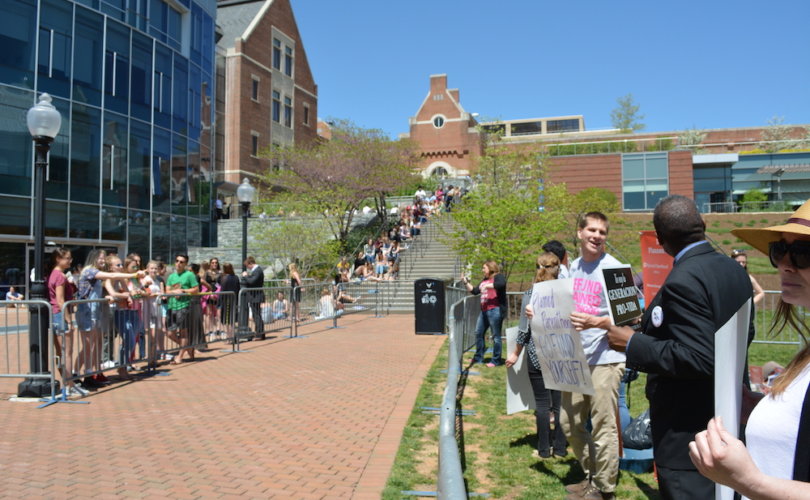 Students promote the pro-life message at Georgetown on the day of Cecile Richards talk.Students for Life of America

WASHINGTON, D.C., April 21, 2016 (LifeSiteNews) – Planned Parenthood CEO Cecile Richards received a standing ovation at Georgetown University Wednesday, when she delivered a lecture at the Jesuit school despite opposition from the archbishop of Washington and pro-life students.

The Hoya, Georgetown’s student newspaper, tweeted that the president and vice president of H*yas for Choice, Georgetown’s pro-abortion student group that is not officially recognized by the university, introduced Richards.

Following an introduction by @HyasForChoice President and VP, President of Planned Parenthood Cecile Richards takes to the stage.

Richards praised H*yas for Choice and the Lecture Fund in her speech, during which she also praised abortion activist Wendy Davis, birth control crusader Sandra Fluke, and the millennial generation for what she claimed was its belief in “LGBT rights” and “reproductive rights.”

Richards only used the word “abortion” four times in her speech, which she posted on the website Medium, and repeated the claim that Planned Parenthood is focused on providing “health care.”  Her speech heavily focused on contraception as necessary for women’s progress.

“Fully one-third of the wage gains women have made since the 60s are solely because of access to birth control,” Richards said.

The Georgetown Lecture Fund’s sponsorship of the event was “a way for them to skirt the system” that doesn’t allow H*yas for Choice to host speakers, Georgetown senior Amber Athey, who attended and live-tweeted Richards’ talk, told LifeSiteNews.

Richards spoke for 30 minutes, participated in a moderated session for about 20 minutes, and answered audience questions for 10 minutes.

The moderators asked the audience to give a round of applause for abortion providers and for Texas opening more abortion facilities, Athey said.

Athey called the moderated session “horribly biased” and noted that the moderators discussed “How they were so excited [Richards] was endorsing Hillary Clinton, how she’s involved in the campaign, and nothing about the potential moral objections to abortion.”

The Hoya tweeted that Richards said it’s necessary to expand access to family planning services—which would include abortion—in order for women to be able to make as much money as men.

“If we finally want to close the pay gap in America, we need more access to family planning sevices.” – @CecileRichards

Athey was one of four students who asked Richards a question.

“Her position is that life begins at birth,” said Athey, referencing an infamous interview during which Richards said her children’s lives began when she delivered them.  “I was wondering why is that not considered extreme but ‘life begins at conception’ is?  It doesn’t make any sense.”

Athey said that Richards was “incredibly rude” to a student representing Georgetown Right to Life who asked Richards why Planned Parenthood promotes abortion over adoption.

The president of the Lecture Fund tweeted that it had been “unequivocally one of the best days of my life” and that she had woken up “feeling like it’s Christmas morning” because Richards was coming to Georgetown and “we’re making history!”

Unequivocally one of the best days of my life. Thank you to the bravery of @PPact & @CecileRichards for coming to @Georgetown #CecileAtGU

Woke up feeling like it's Christmas morning because @CecileRichards is coming to @Georgetown today & we're making history! #ReproJustice

Students for Life of America hosted their We Don’t Need Planned Parenthood display on campus and protested outside the building where Richards spoke.

Georgetown police asked Ruby Nicdao, an independent pro-life activist, to stop showing an image of an abortion victim on campus.

“You can be on the campus, but not with that banner,” they told her.

On Wednesday H*yas for Choice passed out contraception and Planned Parenthood material in a “free speech zone” on campus and asked students to write “thank-you” letters to abortionists.