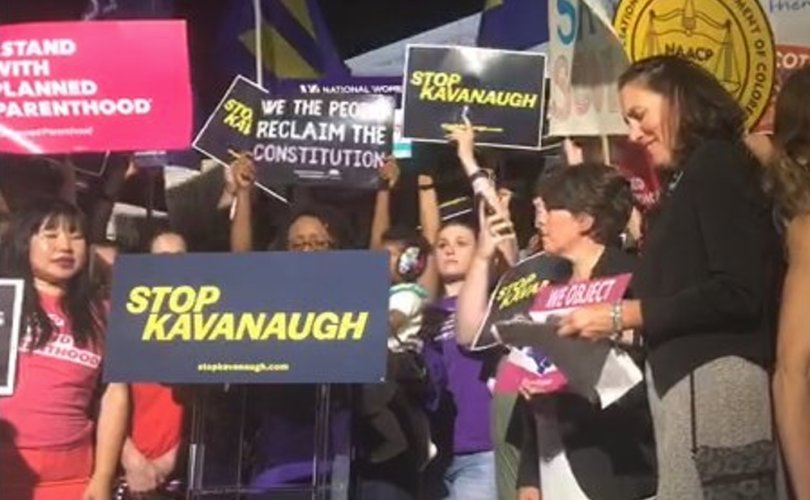 “Roses are red, Violets are blue, Senators vote NO on #Kavanaugh, Or else we're coming for you,” the Planned Parenthood Action Fund tweeted Thursday. “We're going to be LOUD. We're going to be NOISY. And we're not going to stop until we WIN.”

The abortion giant is trying to rally its followers to pressure senators via phone, mail, and social media. But some conservatives are interpreting their rhetoric in a more ominous light, due to the level of hostility and even violence Republicans have faced from left-wing activists.

Kavanaugh’s initial confirmation hearings were marked by protestors, many organized by the “feminist” group Women’s March, screaming to interrupt the proceedings every few minutes. Last month, the Antifa branch Smash Racism DC tweeted a series of threats to Kavanaugh, President Donald Trump, pro-life Sen. Ted Cruz of Texas, and others.

No – you can't eat in peace – your politics are an attack on all of us. You're (sic) votes are a death wish. Your votes are hate crimes […] You are not safe. We will find you. We will expose you. We will take from you the peace you have taken from so many others.

“Just this past week, several Republican senators, including Ted Cruz (R-TX) and Andy Harris (R-MD) have found themselves in heated confrontations with anti-Kavanaugh protesters,” The Daily Wire reports. “Harris was reportedly physically assaulted as he tried to shut the door on protesters in the hallway outside his office.”

“The level of intensity is probably unlike anything I've seen in three and a half years,” Sen. Thom Tillis, R-NC, said. Sen. Bob Corker, R-TN, called it “the worst it's been since I've been here.”

Rush Limbaugh gets word from senators that they have being deluged with threats against themselves and their families, including grandchildren. It is relentless. “It’s vile and it’s evil.”

Much of the anger appears rooted in fears that Kavanaugh would give the Supreme Court its first clear conservative majority since 1973’s Roe v. Wade, particularly that he might provide the long-awaited fifth vote to overturn it. Kavanaugh has generally espoused an originalist approach to the Constitution, though during his initial hearings he also expressed significant respect for Roe’s status as precedent, and gave mixed signals on the judiciary’s ability to declare “unenumerated” rights such as abortion.

Kavanaugh’s pro-life supporters and pro-abortion foes both argue that his non-committal answers were phrased to navigate a narrowly-divided Senate, and that he ultimately would vote to overturn Roe.

The judge’s confirmation appeared to be a foregone conclusion in August, but shortly before the original vote was slated to take place, allegations surfaced by three women claiming he sexually assaulted them. The judge has forcefully denied their claims, which lack corroborating evidence, and critics have noted several inconsistencies in all three stories.

The Senate voted 51-49 Friday to advance Kavanaugh’s nomination to a final confirmation vote Saturday. Moderate Republican Jeff Flake of Arizona says he plans to vote “yes” tomorrow, leaving the final outcome in the hands of pro-abortion Republican Susan Collins of Maine and moderate Democrat Joe Manchin of West Virginia. If one of the two votes “no,” Vice President Mike Pence can break the tie.