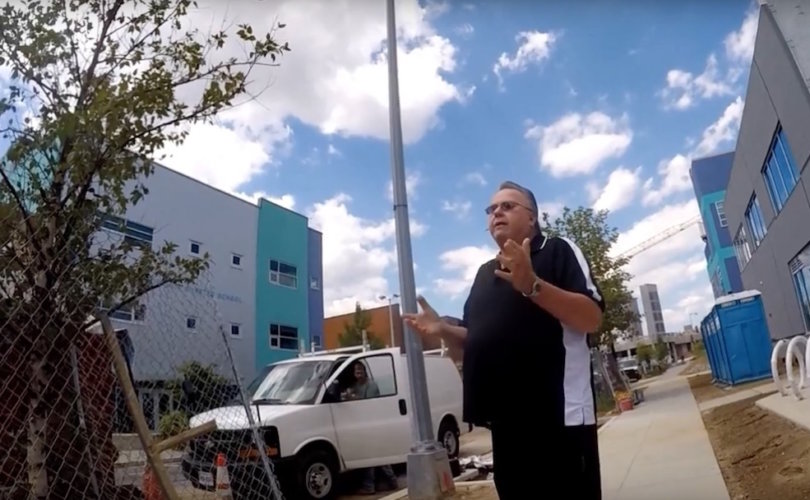 The plumber said he was just “here for the work” and did not “advocate for what the business does.”

“I don’t care if this is a Burger King, or a church, or this,” he said, motioning toward the 26,000-square-foot abortion facility. Planned Parenthood is building across the street from Two Rivers Public Charter School.

Rev. Patrick Mahoney retorted, “You wouldn’t put the plumbing in for the KKK.”

“I wouldn’t?” he responded. “I absolutely would.”

“I’m from the South, man. I like them,” the plumber said.

When asked if he would install the plumbing for “extermination camps,” he replied, “Sure I would.”

“Somebody’s going to do it, OK? You can’t stop it,” he said emphatically.

When asked if he would rig up the plumbing system for Hitler personally, he said, “I'm German, be careful what you say about that.”

Planned Parenthood founder Margaret Sanger spoke to the women’s chapter of the KKK in May 1926, saying that “to me any aroused group was a good group.” She recalled that she so impressed the audience that “a dozen invitations to speak to similar groups were proffered.”

Sanger also launched the “Negro Project,” hiring black preachers to convince their congregations to take birth control or get sterilized, as a means of culling the world of those she considered “unfit.”

Blacks are disproportionately affected by abortion. While 13.3 percent of the U.S. population is black, “non-Hispanic black women” accounted for more than one-third (36.7 percent) of all abortions in 2012, the most recent year for which data are available, according to the CDC’s abortion surveillance. The number rose to more than four-out-of-ten if black Hispanics were included.

A rally outside the facility before this year’s March for Life drew hundreds.

What pro-aborts can no longer deny: Margaret Sanger supported eugenics