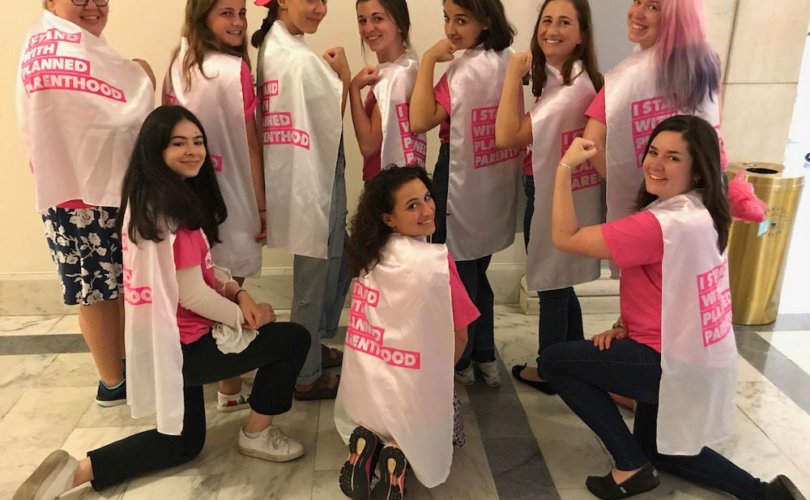 WASHINGTON, D.C., August 1, 2017 (LifeSiteNews) – Abortion activists delivered “I Stand With Planned Parenthood” capes to the “superheroes” who voted against defunding them.

Thanks to all the heroes who helped #StopTrumpcare!

We delivered #StandWithPP capes to all the senators who protected our care! pic.twitter.com/gyZv844tdn

Last week, Sen. John McCain, R-Arizona, cast the vote that doomed a bill axing Obamacare and defunding Planned Parenthood, America's largest abortion chain. It receives around half a billion dollars from the government each year.

In an after-midnight vote, McCain joined two Republicans and 48 Democrats in opposing the “skinny repeal” of Obamacare.

“No real superhero would defend an organization that kills late-term babies in partial-birth abortions and sells their body parts afterwards like widgets off an assembly line,” David Daleiden of the Center for Medical Progress told LifeSiteNews. “The real superheroes are the public officials who will finally stop forcing taxpayers to sponsor Planned Parenthood's barbaric abortion empire.”

Planned Parenthood commits more than 300,000 abortions annually. Its abortion services have risen in recent years as non-violent services have declined.

A Congressional panel investigating the scandal made 15 criminal referrals. The Senate Judiciary Committee referred Planned Parenthood to the FBI for investigation.

The most recent video Daleiden released shows a Planned Parenthood vice president explaining how a “checkbox” allows abortionists to potentially skirt a ban on partial-birth abortion.

“Planned Parenthood's only superpower is brainwashing Senators into giving them our hard-earned money,” said Kristan Hawkins, president of Students for Life of America. “They are the villains in this story and ultimately the pro-life generation will prevail in defunding their predatory business and save those innocent babies whom they target.”