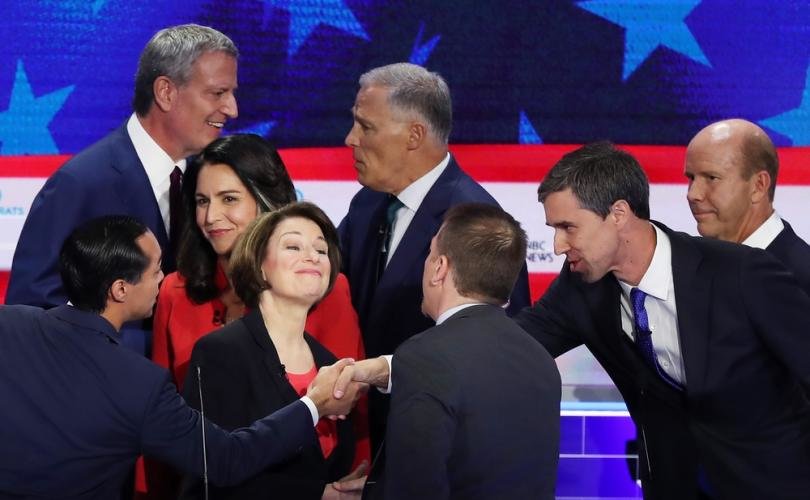 September 13, 2019 (LifeSiteNews) – Every Democrat currently running for the party’s presidential nomination agrees on nearly unlimited abortion at taxpayer expense, yet the abortion lobby is upset the issue didn’t get any mention during the latest primary debate this week.

“At tonight’s #DemDebate there was not *one* question on reproductive health care,” the Planned Parenthood Action Fund tweeted Thursday night, “despite the fact that the Trump admin has been relentless in its attacks on our nation’s program for affordable birth control.”

At tonight’s #DemDebate there was not *one* question on reproductive health care—despite the fact that the Trump admin has been relentless in its attacks on our nation’s program for affordable birth control. #ProtectX

“So far, in the Democratic primary debates for the 2020 election cycle, abortion has barely been discussed,” Rachel Tardiff writes at the far-left Media Matters for America (MMFA). “In August, CNN moderators failed to ask 20 candidates a single question about abortion.” This, she says, is a problem because it lets “right-wing media and anti-choice outlets” continue to “dominate the conversation” during a period where abortion “access” is supposedly “percarious.”

Several of the candidates took the opportunity to signal that they shared Planned Parenthood and Media Matters’ outrage:

The #DemDebate was three hours long and not one question about abortion or reproductive rights.

Since it didn’t come up in tonight’s #DemDebate, at this moment when women’s reproductive freedom is under attack, I wanted to say I trust women to make their own decisions about their health. It’s important we all keep taking about it.

Three hours, not one question on abortion—with women's rights under attack across our country.

One reason the debate may have overlooked abortion is that the field has few disagreements to debate. Most of the candidates are running on a platform of effectively unlimited abortion at tapxayer expense, and several have announced plans to enshrine and expand Roe v. Wade in federal law, effectively banning states from passing any significant pro-life laws.

Every Democrat contender currently in the U.S. Senate has voted against legislation requiring abortionists to transfer infants who survive abortions to hospitals for basic medical care. Senators Bernie Sanders and Kamala Harris have refused to say if abortion is ever wrong, and most recently former Texas Rep. Beto O’Rourke defended abortion up to the day before birth.

Only Rep. Tulsi Gabbard has expressed opposition to third trimester abortions, albeit with undefined “health” exceptions that could render her stance toothless (in Congress, she has a 100 percent pro-abortion voting record, including voting against a late-term abortion ban that contained an exception for physical medical threats).

Live Action founder Lila Rose suggested another reason why the media may be averse to broadcasting the candidates’ abortion stances:

Last night at the #DemDebate, no questions were asked about abortion.

But virtually everyone on the debate stage supports abortion on demand until birth, with no restrictions.