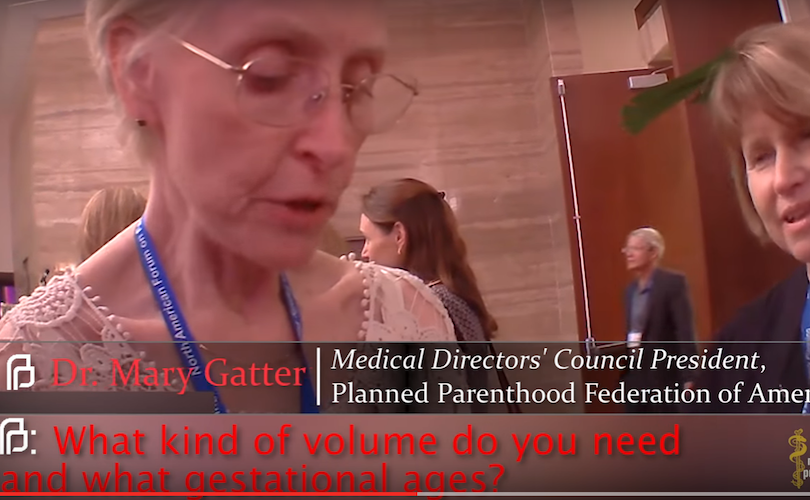 The video is of a conversation CMP investigators had with Dr. Mary Gatter at a Planned Parenthood conference evening reception. Gatter, who in another CMP video, joked, “I want a Lamborghini” when negotiating prices of baby parts, explains that she's “committed” to selling the bodies of aborted babies and “I think it’s a great idea.”

“I did it in LA,” Gatter told the undercover CMP investigators.

“What kind of volume do you need and what gestational ages?” asked Gatter. She said her abortion facility only does “20 cases [abortions] a week, so it's not a big volume,” and that they only abort babies up to 16 weeks old.

“Most of the requests are actually like 16 weeks and above,” CMP responded, but “I think it would be worth it to make the connection.”

“We may have to make sure that your staff who are on site are credentialed, privleges, whatever, background checks and all that stuff,” said Gatter. “You know, you have to pay a little money for the use of the space” inside the abortion facility.

“It's not a lot, we're not greedy about that stuff,” said the woman famous for her “I want a Lamborghini” quip.

“The fact that Novogenix, StemExpress, and ABR stationed their own workers inside Planned Parenthood abortion clinics to perform the harvesting, packaging, and transport of aborted baby body parts demonstrates that Planned Parenthood had no reimbursable costs under the law,” said David Daleiden, project lead for CMP.

“What we’ve been quoting is $50 per specimen,” the buyer told Gatter. “I think some people are doing more, some slightly less.”

The CMP investigator said what their company likes about paying per “specimen” is “that way we're not paying for material we can't use.”

“If we can get a liver, a lung, and you know, a brain –” the CMP investigator begins. Gatter cut him off, asking for assurance that “you would show up to do this.”

“We would send a tech in,” the CMP investigator confirmed. Gatter nodded. She said at the Los Angeles Planned Parenthood they committed abortions up to 24 weeks and “we had a lovely tech” from Novogenix named Heather.

“We had Heather coming to two of our sites that went a little further along and they got a lot of [fetal] tissue from us,” said Gatter while clutching a glass of wine. “Give me a call,” she told the CMP investigators.

Gatter was interviewed by the U.S. House Energy & Commerce Committee in September 2015.

“Planned Parenthood has never publicly admitted how much money total they received from the Novogenix contract,” the video explains.

In December 2016, the U.S. Senate Judiciary Committee referred Planned Parenthood and Novogenix to the FBI for criminal prosecution.

“The volume-based sums that Planned Parenthood charged these businesses for baby parts are criminal trafficking and profiteering in fetal body parts,” said Daleiden. “The U.S. Department of Justice should take heed of the Congressional investigations’ criminal referrals and prosecute Planned Parenthood to the full extent of the law, and taxpayers must stop being forced to subsidize Planned Parenthood’s criminal abortion empire.”