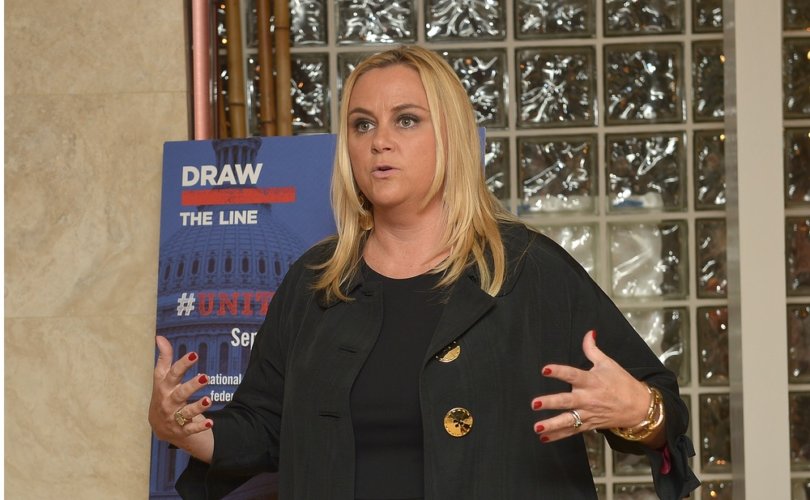 Laura McQuade, who before joining Planned Parenthood was Executive VP and COO of the Center For Reproductive Rights, speaks at a pro-abortion event at a private residence on September 25, 2013 in Los Angeles, California.Charley Gallay / Getty Images for Center for Reproductive Rights

June 25, 2020 (LifeSiteNews) – The United States’ largest abortion chain has fired one of its New York executives for allegedly discriminating against black employees, amid a growing furor over perceived racism that has led to a rare acknowledgment of Planned Parenthood’s racist origins.

The board of directors for Planned Parenthood Federation of America (PPFA) announced Tuesday that it has fired Planned Parenthood of Greater New York (PPGNY) chief executive Laura McQuade over allegations that she treated workers in a hostile and even racist manner, the Daily Caller reports.

“We reject what we view as McQuade’s Trumpian leadership style,” reads a letter by a group of affiliate employees calling itself Save PPGNY, “and envision a Planned Parenthood where all our staff, in particular our black and other staff of color, are honored for their expertise and included in the decision-making process.”

Among the group’s allegations against McQuade are that she has a habit of “brutally shaming staff members in internal meetings in front of their colleagues,” that she “lost the 18 million dollar surplus she inherited and replaced it with a 2020 projected deficit of 6.2 million dollars for the first six months,” that she presided over “unprecedented rates of staff turnover” resulting in a loss of professional experience “so profound as to be detrimental to every aspect of the organization.” She also apparently “immediately laid off 134 employees and furloughed another 100” in response to COVID-19 instead of cutting her own salary or the salaries of fellow executives.

Most disturbingly, they charge that “PPGNY, under the leadership of CEO Laura McQuade, has effectively gaslit and silenced their marginalized staff thus creating a toxic work environment,” by exploiting the “language of diversity, equity, and inclusion” to “manipulate and silence those with differing opinions and perspectives.”

“They have leveraged identity politics by putting Black and other people of color in positions of leadership who actively participate in harming Black staff and other staff members of color below them,” the group’s Equity letter continues. “PPGNY repeatedly tokenizes their Chief Equity and Learning Officer, a Woman of Color who is not of African descent, as the ‘voice’ for BIPOC [black, indigenous, people of color] staff. The decision to hire a non-Black person in this role exemplifies the ways in which white-led organizations use non-Black people as a buffer to actually confront and uproot anti-Blackness within organizations.”

“With multiple attempts by the BIPOC staff to bring these concerns to our supervisors, we continue to be invalidated and marginalized,” Save PPGNY says. “White and non-Black employees are still given more pay and more advancement opportunities than their Black colleagues.”

Notably, the group draws a direct line between McQuade’s alleged actions and an element of Planned Parenthood’s past the organization has long tried to downplay or deny: the racist, eugenicist beliefs of founder Margaret Sanger.

“Planned Parenthood was founded by a racist, white woman,” the letter says. “That is a part of history that cannot be changed. While efforts have been made to undo some of the harm from institutional racism, many of these issues have worsened under McQuade’s tenure. After years of complaints from staff about issues of systemic racism, pay inequity, and lack of upward mobility for Black staff, highly-paid consultants were brought in three separate times to assess the situation. Each time, employees of color were brutally honest about their experiences, but nothing changed.”

The allegations come while America is in the midst of intense racial unrest sparked by the killing of a black man by a white police officer in Minnesota. What started as protests (and violence) in the name of ending police brutality quickly morphed into a broader narrative about “systemic racism” in U.S. institutions and a campaign to tear down art perceived as “racist,” from statues of historical figures (regardless of whether or not they were on the right side of their eras’ civil rights battles) to paintings of Jesus Christ that depict the Savior as white.