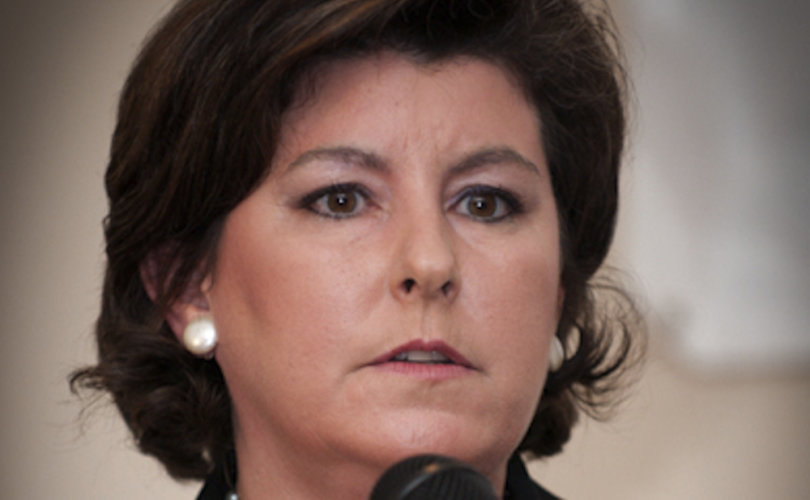 GEORGIA, June 21, 2017 (LifeSiteNews) – Planned Parenthood invested more than half a million dollars trying to keep an old nemesis from becoming the first Republican female to represent Georgia in the U.S. House of Representatives. They failed on Tuesday.

Representative-elect Karen Handel of Georgia's sixth district is well-known to pro-lifers because of her public battle with the abortion company in early 2012. Handel ran against pro-abortion Democrat Jon Ossoff for former Rep. Tom Price's old House seat. It was vacated because President Trump appointed him to be Secretary of Health and Human Services.

Handel, who has made a career of women's health and anti-breast cancer advocacy, was the senior vice president for public policy at the Susan G. Komen Foundation for the Cure. The breast cancer charity tasked Handel with figuring out how to cut ties with Planned Parenthood in part because its grants to the abortion company weren't effective.

In 2011, Planned Parenthood was under investigation by the U.S. House.

Planned Parenthood doesn't do mammograms. It does less than two percent of all women's cancer screenings in the U.S.

Planned Parenthood unleashed a media and political campaign against Handel and forced Komen to reverse its decision. Handel resigned and declined a severence package.

She then wrote Planned Bullyhood: The Truth Behind the Headlines about the Planned Parenthood Funding Battle with Susan G. Komen for the Cure.

Remember that @karenhandel and the Komen story began the public unveiling of the fact that PP does not actually do mammograms.

Planned Parenthood was the second-largest backer of Ossoff's campaign.

Ossoff and pro-lifers advertised Handel's opposition to Planned Parenthood. The pro-life Susan B. Anthony List contacted more than 65,000 voters with information about Handel's record of standing up to the abortion organization.

The anti-Trump movement hoped that the amount of money they were pouring into the race would make it their first major victory since Trump's election. The race was commonly called a “referrendum on Trump” and was hyped by the liberal media. Such promotion backfired.

Thanks to everyone who breathlessly and snarkily proclaimed #GA06 as a “referendum on POTUS @realDonaldTrump“.

You were right. #winning

Guys! Guys! Has anyone asked Planned Parenthood if they're kinda wishing Handel was at Susan G. Komen right now? Just a thought.

The daily email newsletter of the Center for American Progress wrote a terse mention of the race and didn't name Handel.

“'The fight goes on,'” it said. “Those were Jon Ossoff’s words last night after failed to #FlipThe6th, in the heated race to replace HHS Secretary Tom Price. Hear from his supporters about the fights ahead here.”

Planned Parenthood only released one election night tweet about the loss. It also didn't name Handel.

Jon @Ossoff came within 5% in a district that elected @SecPriceMD by 23% 7 months ago. We won't stop fighting for women. #GA06

Pro-abortion lobby group NARAL, which spent more than $100,000 in the race, claimed that because their loss wasn't bigger, it showed voters are “sick and tired of candidates who obsess over restricting access to abortion.” NARAL also attacked Handel for her “obsession” with defunding Planned Parenthood.

The fact that #GA06 was close at all shows that voters are sick of candidates who obsess over restricting abortion access. @ilyseh's stmnt: pic.twitter.com/tdEpEJyXrh

SBA List's take was the opposite – voters are sick of candidates supporting abortion on demand.

Handel's supporters congratulated her on her historic victory both for women and for the “Trump Train.”

Karen Handel becomes 1st Woman Rep GA has sent to Congress. Still waiting for the glass ceiling stories, or do conservatives not get them?

Karen Handel is the first female Republican elected to Congress from Georgia.

Congrats to #prolife Karen Handel for her victory in GA tonight! Trump Train continues to roll!

It's time for Democrats to do some “soul searching,” The Daily Beast wrote. “They are now zero-for-four in special elections since Trump became the president and need to understand why … after $23 million, a candidate who genuinely ignited the grassroots, and a Republican president who may or may not be (but probably is) under FBI investigation and can’t stop talking about it, the real question Democrats need to answer is: What’s it going to take to win an election in the era of Trump? As of Tuesday night, they still have no idea.”

And now Planned Parenthood has one more pro-life woman lawmaker to reckon with.

The Komen funding Handel almost cost Planned Parenthood was around half a million dollars. Now, it stands to lose more than half a billion taxpayer dollars if it's successfully defunded.