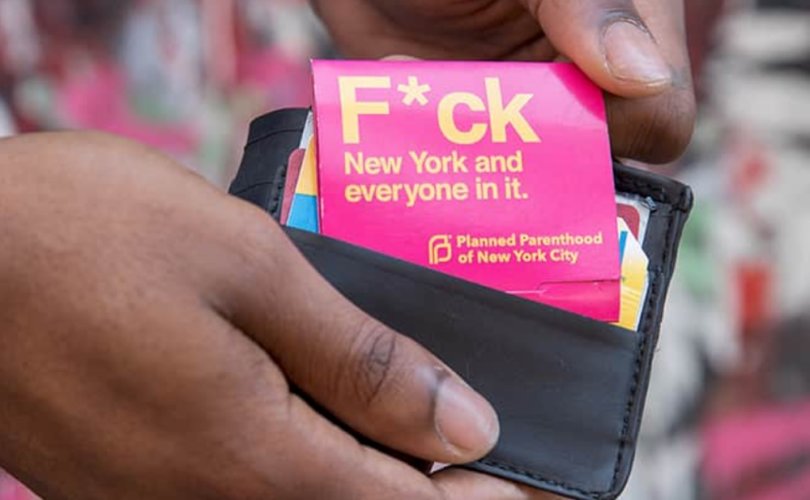 NEW YORK, July 24, 2018 (LifeSiteNews) – Planned Parenthood of New York City has deleted an obscenity-filled video and website soliciting donations for the express purpose of upholding the “freedom” to have sex with “New York and everyone in it.”

As LifeSiteNews reported earlier this month, the video features various people declaring “F***” everyone from “New Yorkers who love to complain” to “anyone who can afford their rent” to dancers and brokers. While the 45-second video initially appears to be using the F-bomb as a generic insult, by the end it’s clear that the word is actually being used as a verb.

“F*** New York and everyone in it,” the final actress says, smiling. A narrator then summarizes the message: “Protect our right to safely f*** whoever the f*** we want. Donate to Planned Parenthood of New York City.”

“Planned Parenthood of New York City had to be brave and make fearless decisions to overcome their daunting challenges. So our first goal was getting them to embrace that. Which they certainly did,” Gerard Caputo, COO of the BBH NY advertising agency that devised the campaign, told AdWeek. “We wanted to be celebratory in the face of massive opposition rather than plead their case in a typical PSA campaign that’s easy to ignore.

But, apparently, the abortion giant's crass campaign received too much negative feedback.

The video can still be viewed here and on other social media accounts that shared it, but no longer appears at its original link. The abortion giant also set up a web address, freedomtofck.com, that originally led to a unique donation page declaring that “New Yorkers have more sex than anyone else in America. (Woo! We did it!)” Now it redirects to Planned Parenthood Action Fund’s main page.

While Planned Parenthood appears to have purged the ad from its primary links, some old tweets including and referencing it remain published.

Following the campaign’s debut, the pro-life Radiance Foundation responded by suggesting that the result of Planned Parenthood’s pro-promiscuity mentality was anything but joyous, noting that “NYC has an epidemic of STDs according to the CDC.” ​

Yup. Half a billion of our tax $$$ annually pay for this #fakehealth from @PPFA @PPNYCAction! Our gov't NEVER holds them accountable for all of their corruption. Oh, & NYC has an epidemic of STDs according to the CDC. So, how's THAT “freedom” for ya? https://t.co/fIEZC2xvZw

On Monday, The Federalist’s Georgi Boorman detailed how the ad’s underlying message was “much more pernicious” than its vulgarity.

After detailing New York’s thoroughly permissive abortion laws and the ease of obtaining birth control in the state, Boorman argued that Planned Parenthood’s vision of “sexual freedom” was ultimately a “license to kill.”

“They are defining freedom as state sponsorship of their sexual ethic: screwing whoever you want, whenever you want, as whatever identity you want, with the power to kill your own children so they don’t get in the way,” she wrote. “PP wants sexual promiscuity endorsed by the state and by the culture, and if that promiscuity comes at the expense of another human’s life, well, they want you to think no one should criticize you for it.”