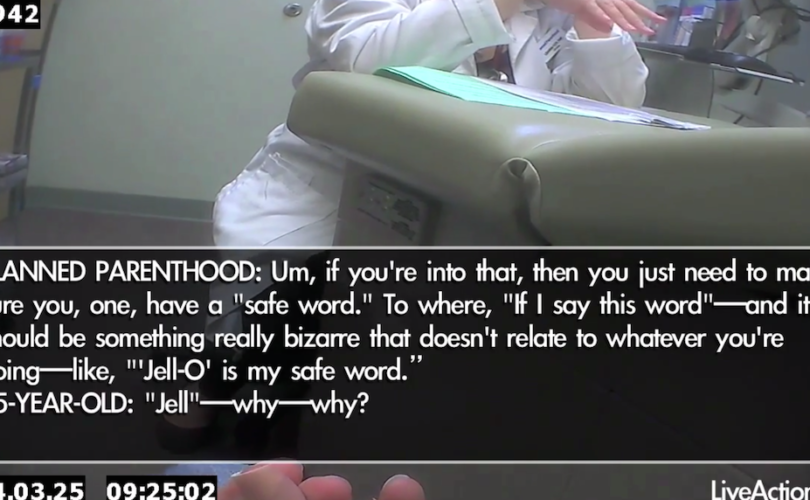 “Some people like being spanked, or hit, or whipped,” a female counselor, wearing a white medical coat, told the Live Action investigator. Others are aroused by doing “the baby thing,” such as wearing diapers.

Live Action's president, Lila Rose, commented that “no one can justify a counselor telling a 15-year-old girl that 'some people like being spanked, or whipped, or hit.'”

In a common theme with the other videos, the woman suggests the minor girl visit pornographic websites, noting that just because the webpages are prurient “doesn't mean they're not educational.”

“Some people like being spanked, or hit, or whipped.”

A Planned Parenthood counselor in Indianapolis said the minor should “work up to” the point that her boyfriend could begin “hitting” her during intercourse. She also discussed biting — perhaps “hard enough to…maybe [draw] some blood” — and how to hide the evidence by being bitten in the chest.

A Planned Parenthood counselor in Denver offered that a minor and her boyfriend may enjoy “urinating” and “pooping” on each other for sexual stimulation.

Planned Parenthood, the nation's largest abortion provider, will receive an additional $75 million in taxpayer funds from the Department of Health and Human Services to provide sex education.

“As our videos show, and as more videos will continue to show, Portland is not an outlier,” Rose said. “You'll see the exact same institutional ethos of promoting destructive sexual activity in every other city and state where Planned Parenthood operates.”

As it typically does, Live Action released the full, unedited video of the stop, as well as a shorter video highlighting the taxpayer-funded abortion provider's most egregious behavior.