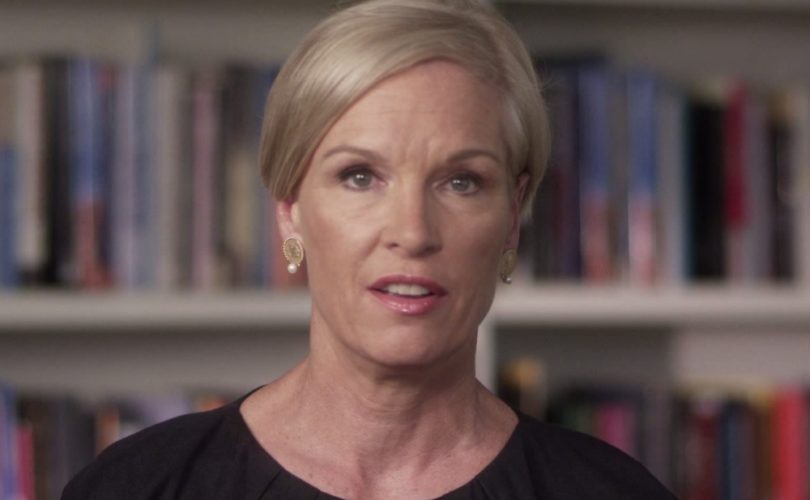 WASHINGTON, D.C., October 13, 2015 (LifeSiteNews) – Pressured by a series of undercover videos showing their highest officials in compromising situations, Planned Parenthood announced today that it will no longer accept money in exchange for transferring the body parts of aborted babies to medical researchers.

“In order to completely debunk the disingenuous argument that our opponents have been using — and to reveal the true political purpose of these attacks — our Federation has decided, going forward, that any Planned Parenthood health center that is involved in donating tissue after an abortion for medical research will follow the model already in place at one of our two affiliates currently facilitating donations for fetal tissue research,” Planned Parenthood Federation of America President Cecile Richards wrote in a letter to the National Institutes of Health (NIH).

Planned Parenthood facilities in Washington state donate the organs and tissue of aborted babies to researchers without receiving reimbursement, PPFA says. From now on, any Planned Parenthood abortion facility that continues its “fetal tissue donation” program will follow its guidelines.

The abortion provider stands accused of altering its abortion technique to maximize the number of organs harvested, illegally performing the partial birth abortion procedure, and profiting from the trafficking in human body parts. The latter two charges are federal felonies carrying steep fines and several years in prison.

Richards insists that Planned Parenthood did nothing wrong, and its policy change is not “a suggestion that anyone else should not take reimbursement” for aborted babies' organs.

While Planned Parenthood officials have refused to say how much money the fetal tissue program generates, PPFA executive vice president Dawn Laguens told the Associated Press, “I don't think [the new policy] will have a huge impact on their budget.”

Reimbursements for harvested fetal organs does not match the $528 million Planned Parenthood received in federal, state, and local taxpayer funds from July 2013 through June 2014. Taxpayer subsidies account for more than 40 percent of its overall revenue.

﻿﻿Pro-life advocates say they want more details about the new policy – and justice for any previous crimes.

The man behind the undercover video series, Center for Medical Progress lead investigator David Daleiden, dismissed the letter as a “stunt.”

“Without releasing the text of the alleged new 'policy' and the exact model from the their Washington affiliate,” Daleiden told LifeSiteNews, Planned Parenthood's action “tells us nothing. This only raises more serious questions about what Planned Parenthood leadership has been allowing its clinics to do with money and baby parts, and intensifies the need for Congress to pursue full auditing and oversight of Planned Parenthood’s unaccountable criminal enterprise of baby parts trafficking.”

Operation Rescue President Troy Newman, who is also a CMP board member, told LifeSiteNews, “Planned Parenthood has been caught with their bloody hands in the cash register. They are now trying to back track their criminal conduct while making counter accusations at the investigators. This will not work.”

“It is now abundantly clear that Planned Parenthood has been violating federal law that prohibits the profiting from fetal cadavers,” Newman told LifeSiteNews. “Now more than ever, we must press for full scale prosecutions, and jail for all the abortionists involved.”

In the wake of today's letter, at least one member of Congress promised those investigations will continue.

“There are still many questions yet to be answered surrounding Planned Parenthood's business practices and relationships with the procurement organizations,” said Rep. Marsha Blackburn, R-TN, who sits on the House Energy and Commerce Committee, which is investigating Planned Parenthood. “This is exactly why the House is investigating abortion practices and how we can better protect life.”

“It is clear that Planned Parenthood knows it is wrong to profit from the sale of baby body parts, but their decision to stop selling organs doesn't change the fact that Planned Parenthood still profits from the death of children,” said Senator James Lankford. “This organization still engages in the inhumane treatment of children, and our federal government forces taxpayers to give them their hard-earned money. Congress must continue all investigations into their grotesque practices and remain committed to defunding them.”