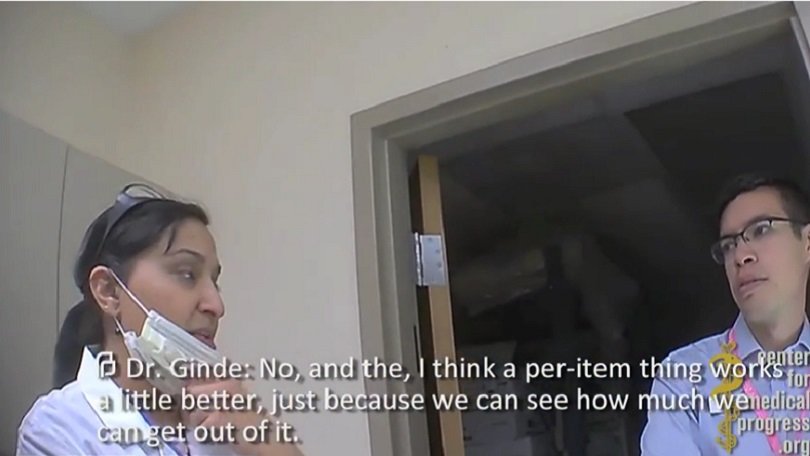 LOS ANGELES, July 28 2015 (LifeSiteNews) – Allegations that Planned Parenthood harvests and sells aborted babies' organs and tissue for a profit have been bolstered with the release of a third undercover video this morning, showing another of the organization's top leaders appearing to admit to an illegal profit motive.

The latest exposé also features the heartrending testimony of a former clinician who picked through mounds of aborted fetal tissue to find the parts fit for sale, as well as graphic footage of an investigator sorting through an aborted baby's kidneys and brain tissue, examining to see if they meet his standards for purchase.

In the third installment, the Center for Medical Progress covertly videotaped a conversation with Vice President and Medical Director of Planned Parenthood of the Rocky Mountains (PPRM) Dr. Savita Ginde. PPRM, which is based in Denver, oversees abortion facilities in Colorado, Nevada, New Mexico, and Wyoming.

As an undercover filmmaker, who posed as a buyer from a human biologics firm, discusses pricing, the doctor seems to say she is interested in maximizing the abortion facility's revenue by being paid for each individual body part.

“I think a per-item thing works a little better, just because we can see how much we can get out of it,” Dr. Ginde says of the aborted baby.

After the investigator sifts through and identifies several fetal parts, which he says would net Planned Parenthood $200 to $300 compensation, a medical assistant jokes, “Five stars.”

That posture was familiar to Holly O'Donnell, a phlebotomist and former procurement specialist at StemExpress LLC, the company whose promotional materials promise Planned Parenthood “a financial benefit to your clinic” for selling fetal tissue.

In a jarring interview, O'Donnell remembers learning that was part of her work routine.

“I thought I was going to be just drawing blood, not procuring tissue from aborted fetuses,” O'Donnell said.

But on her first day on the job in 2012, she remembers someone emptying a bottle of blood into a strainer, then placing its contents onto a plate.

Her trainer began pulling aborted babies' body parts out of the mass of tissue. “She said, 'OK, this is a head. This is an arm. This is a leg,'” O'Donnell remembers.

Then the trainer asked her if she could identify the body parts.

“I took the tweezers. I put them in the dish. I remember grabbing the leg…and the moment I picked it up I just feel like deaths and pain…shoot up through my body,” O'Donnell says. “I blacked out, basically.”

She says she had to be revived with smelling salts.

Another worker tried to reassure her, saying, “Don't worry. It still happens to a bunch of us. Some of us don't ever get over it.”

“I remember leaving that day [thinking] like, what have I gotten myself into?” O'Donnell admits.

She said the main nurse from Planned Parenthood was always concerned that StemExpress procure the specimens they sought – not because of concern of medical research, but because the facilities were compensated for it.

“For whatever we could procure, they would get a certain percentage,” she says. “The main nurse was always trying to make sure we got our specimens. No one else really cared, but the main nurse did because she knew that Planned Parenthood was getting compensated.”

“If you can somehow procure a brain or a heart, you're going to get more money,” she adds.

“It's a pretty sick company.”

The 11-minute-long video – entitled “Human Capital, Episode1” – and the fact that the video ends by showing Dr. Deborah Nucatola (from the first video) saying, “I think this is definitely to be continued,” imply that additional undercover footage along the same lines is forthcoming.

David Daleiden told LifeSiteNews that the release of new investigative material, gathered over the course of 30 months, could stretch out over weeks or months.

The first video showed Dr. Deborah Nucatola, who oversees medical practices for all national Planned Parenthood offices, discussing organ harvesting while eating a salad and drinking red wine during a business luncheon. She appears to discuss performing partial birth abortions, which have been illegal since 2003.

The second, released last Tuesday, shows the president of Planned Parenthood Federation of America’s for-profit Medical Directors’ Council, Dr. Mary Gatter, seeming to haggle over the price of fetal tissue and joking that, in exchange for selling fetal body parts, “I want a Lamborghini.”

“Planned Parenthood’s sale of aborted baby parts is an offensive and horrifying reality that is widespread enough for many people to be available to give first-person testimony about it,” said David Daleiden, the lead investigator. “CMP’s investigative journalism work will continue to surface more compelling eyewitness accounts and primary source evidence of Planned Parenthood’s trafficking and selling baby parts for profit. There should be  an immediate moratorium on Planned Parenthood’s taxpayer funding while Congress and the states determine the full extent of the organization’s lawbreaking.”

Planned Parenthood President Cecile Richards has apologized for the “tone” of the first video but denies any laws have been broken.

It is a federal felony to sell human organs or tissue for “valuable consideration,” or to make a profit from such a sale. Richards says the facilities merely break even, and Planned Parenthood has said its work in human organ sales is a “humanitarian undertaking.”

“There is no doubt, based on evidence in this video, that Planned Parenthood financially profits from the illegal sale of aborted baby body parts,” said Troy Newman, the president of Operation Rescue, who also serves on the board of the Center for Medical Progress and advised Daleiden during the investigation. “When Planned Parenthood’s head, Cecile Richards, denies this, she is brazenly attempting to deceive the American people. We need to immediately defund Planned Parenthood and hold them criminally accountable for their horrific conduct that clearly runs afoul of the law and violates every sense of human decency.”