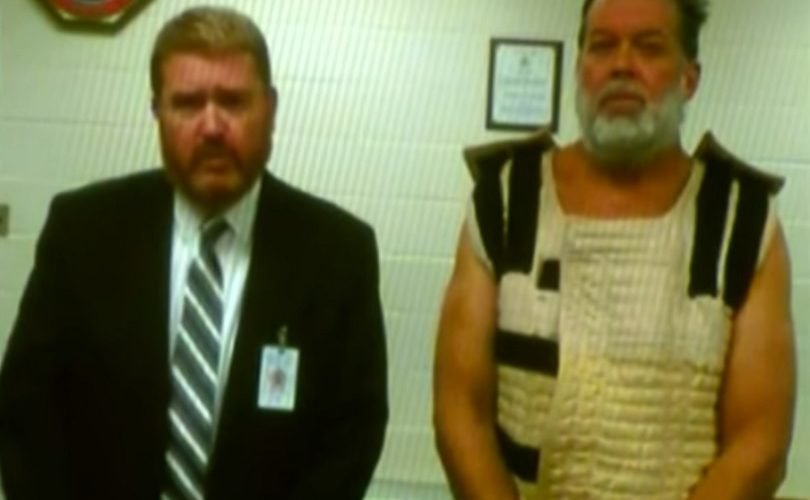 That's all that Robert Lewis Dear uttered as he faced his first day in court this afternoon in El Paso County Courthouse.

Dear, the 57-year-old man arrested for killing three people and injuring a dozen others last Friday, appeared via video for a 10-minute initial hearing.

Judge Martinez's words would have jolted most people. Local prosecutors charged Dear with first-degree murder, which carries a minimum sentence of life in prison and a maximum of the death penalty.

But Dear remained both motionless and emotionless, his upper body covered in a padded “suicide prevention garment” as he stood alongside his public defender, Daniel King.

These are only preliminary charges from the local prosecutor and are likely to expand. District Attorney Dan May said he will file formal charges next Wednesday, December 9, at 1:30 p.m. local time.

STORY: The Planned Parenthood shooter: not who you think he is

The federal government may try Dear for additional federal crimes, as well. Both local police and a U.S. Attorney confirmed that the Obama administration may press federal terrorism charges against Dear. Police told ABC News that the Justice Department would only intervene if the local case fell through.

U.S. Attorney John Walsh told media outlets that the Justice Department's Civil Rights and National Security divisions had begun their own investigations. Some reporters have speculated the Justice Department could prosecute Dear under the Freedom of Access to Clinic Entrances Act (FACE) Act, signed into law by President Bill Clinton in 1994.

That raises the possibility that Dear's crimes could be tried as a federal case of pro-life domestic terrorism.

Stewart and Markovsky were both reportedly accompanying friends to the abortion facility at the time of the shooting.

Police will conduct a thorough investigation of the Planned Parenthood facility, which is so damaged in the crossfire that it has closed for a few days. They expect their investigation will take six to seven days. Dear's lawyer would then like his own opportunity to look at the evidence.

“We would want to be able to visit the crime scene and conduct our own investigation as soon as possible,” King said.

Daniel King previously represented James Holmes, the deranged man who killed 12 people in an Aurora, Colorado, movie theater on July 19, 2012. Holmes is currently serving life in prison without the possibility of parole.