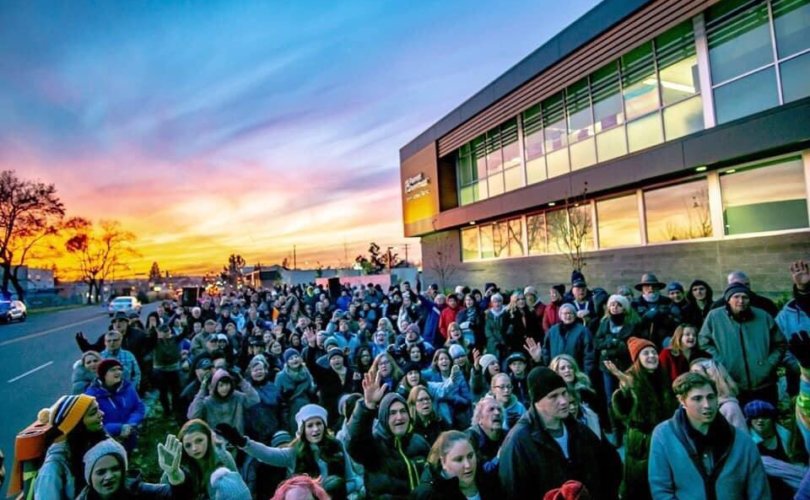 The Church at Planned Parenthood outside the abortion center in Spokane, WashingtonFacebook

“You have a billion-dollar industry suing local church pastors that aren't wealthy at all, for singing and peaceably assembly,” Pastor Ken Peters, who is responsible for the worship services, told Fox News.

The Church at Planned Parenthood (TCAPP), as it is officially called, “has been holding massive protests since the fall of 2018 on the narrow public right of way directly adjacent to the Planned Parenthood building,” the lawsuit stated. “Directly on the other side of the wall from where the massive crowd gathers to sing, chant, whistle, and yell and scream are all of the facility’s patient exam rooms.”

The lawsuit failed to mention that the worship services begin at 6 p.m., which is when the abortion center closes.

“TCAPP leaders intentionally increase the noise by encouraging the crowd to raise their voices, to sing louder and to scream and shout louder and longer,” Planned Parenthood of Greater Washington and Northern Idaho claimed in the lawsuit. “The noise level routinely exceeds the limits set forth in the city noise ordinance.”

“If TCAPP protests were just about worship and not about disrupting the operations of the clinic, TCAPP could relocate to the opposite side of the street in front of the Salvation Army building,” the lawsuit suggested. In that location, “there is more room for a large gathering and all involved would be safer,” claimed the company that profits from aborting human beings.

Peters, the founder of TCAPP, told Crosscut that he specifically chose the narrow part of the street to hold worship services once a month. “We want to get as close to Planned Parenthood as we can, because the closer we are, the bigger the statement that it makes,” he said. “It makes a statement that we disagree with what they’re doing.”

Commenting on the noise level, Peters said, “We’re doing everything we possibly can to comply with the sound ordinance and still be able to do what we feel is our First Amendment right.” At the same time, “(w)e know they’re there with their little sound meters and yeah, it’s just a stupid game.”

“We’ve been running for two years,” Peters said. “We’ve never been cited. We don’t cause destruction. We don’t loot. We don’t riot. We literally go to Planned Parenthood and we hold church once a month. We do this after hours. We are not causing any harm.”

Peters explained that his congregation is “bringing attention to the fact that they are killing life for money. That’s what they don’t like. That’s what they’re suing us for. We are shining a light for the Lord and on their sin and that’s what (sic) they hate us.”

Planned Parenthood commits more than 345,000 abortions annually, according to its most recent report. Additionally, the organization handed out more than 593,000 emergency contraception kits, commonly known as the morning-after pill, which can also cause abortions in some cases.