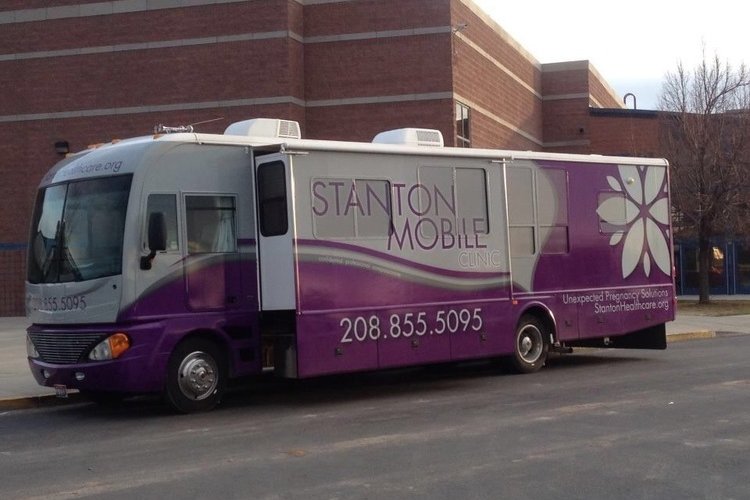 MERIDIAN, Idaho, December 7, 2016 (LifeSiteNews) – Planned Parenthood is suing Stanton Healthcare, a life-affirming women’s medical clinic, for parking its mobile unit on Stanton’s own property next to the abortion center. In an exclusive interview with LifeSiteNews, Stanton Founder and CEO Brandi Swindell explained how this reveals Planned Parenthood’s true agenda of restricting women’s choices and promoting abortion.

Planned Parenthood is taking two routes of legal action against Stanton. The abortion company is using a “technicality” to claim that Stanton is “in violation of the covenants of the complex” in which it’s located, and claiming that the life-affirming, state-of-the-art mobile unit is creating a “nuisance.”

Planned Parenthood has claimed “we’re inviting other groups to come on our property which is creating a nuisance for them,” said Swindell. “They’ve made false accusations” of harassment, but Stanton has “very strict policies against that.”

“The mobile [unit] has a portable ultrasound machine,” Swindell told LifeSiteNews. “In the back, it’s been converted into an exam room. All the cabinets and drawers are full of baby supplies, diapers, formula, maternity clothes…it’s an actual safe, confidential setting [in the] mobile healthcare clinic.”

“This is targeting a life-affirming women’s medical clinic that is providing access to women to receive quality healthcare at no charge and alternatives to abortion,” said Swindell. “It’s very clear that Planned Parenthood doesn’t want any competition. They don’t want anyone taking business away from them. They are bothered by our presence because the reality is they don’t want women to have free choice. They don’t believe in choice. They believe in one choice, one option, and that’s what they sell, and that’s abortion.”

Swindell started Stanton Healthcare 10 years ago with the goal of replacing Planned Parenthood.

Stanton has launched an international affiliate program with partners in Belfast, Ireland, Southern California, and soon a number of U.S. cities.

Stanton owns property on both sides of the Meridian Planned Parenthood. On one side, it will build another pro-life center from the ground up. Stanton has already planned and acquired funding for some of the project’s initial expenses, but until the 7,00-square foot clinic is finished, it is serving women via its mobile unit there.

It will also soon be partnering with a local hospital to provide mammograms, a service not available at Planned Parenthood.

Stanton’s goal is to “replace Planned Parenthood in our communities, in our nation, and most importantly, in the hearts of women that we serve,” according to Swindell.

Stanton Healthcare is ‘a horrifying thing to Planned Parenthood’

“We don’t even go out and say anything to the girls,” in Meridian, said Swindell. Outside the mobile unit is a sign advertising the free help inside. “They see us and then they come in.”

“I’ve been in the [pro-life] movement almost 17 years, and you hear about Planned Parenthood suing different people [but] this is one of the first times that they’re going after a life-affirming women’s medical clinic and trying to restrict access,” Swindell noted. “They’re trying to restrict women from having access to our services…I think this is really exposing who they are at their core.”

“They are not pro-woman, they are not pro-alternatives, they are about their business and their bottom line,” she continued. “And so I think that this is really going to help people see and understand what we’ve always known: that Planned Parenthood is not good for women, they are not providing true healthcare, they are not providing choice. It’s a business model and…they’re motivated by their worldview of abortion on demand and they’re motivated by seeing every woman as a commodity, seeing them with a dollar sign…even the presence of Stanton Healthcare and our mobile clinic providing options and alternatives is a horrifying thing to Planned Parenthood, which every American should find deeply troubling.”

Rev. Patrick Mahoney, a long-time pro-life activist who works closely with Stanton, told LifeSiteNews that Meridian “is the fourth fastest-growing in the country. And the mayor of that city was just at our 10th anniversary gala and publicly contributed $1,000 to Stanton.”

Swindell said some of their support comes from “people of goodwill that aren’t even in the pro-life movement.”

For example, Swindell said the mayor of Meridian has absolutely no interest in being “embroiled in controversy” but she wants to “make sure women have loving alternatives” and healthcare.

This lawsuit means “people are gonna see very clearly who they [Planned Parenthood] are and what they’re about,” said Swindell.

‘Planned Parenthood should be ashamed of themselves’

Perhaps it’s her experience with pro-life and human rights advocacy for nearly two decades, her assertive and feminine demeanor, or her strong faith in God, but Swindell shows no signs of fear as she faces this sinister lawsuit from the country’s largest abortion provider.

She said Stanton’s lawyers “are reviewing the complaint right now, and they—our board, our leadership, with our legal counsel—will write a response to it… then there will be a bit of a back-and-forth, and it could potentially end up in court.”

“Our standards of excellence are actually better than what Planned Parenthood has. And so for them to attack us, demean our work, I find offensive…I take offense to it because their lawsuit and their desire to remove our mobile clinic is an affront to the women and the clientele that we serve,” said Swindell. “I’m not gonna be intimidated by Planned Parenthood. I’m not gonna be bullied because the voice that I listen to, it’s the voice of every woman who walks through our doors. And every woman who says to me or one of our client advocates or one of our nurses or our clinic manager, ‘thank you for being here. I don’t know what I would have done without Stanton.’ That’s the power of our work, and that’s why I’m not gonna back down. And that’s why Stanton’s not gonna back down.”

“Planned Parenthood should be ashamed of themselves, that they would ever restrict or try to prevent a non-profit women’s center from providing quality healthcare and hope to women in need,” she continued.

This isn’t the first time that Swindell has stood up to powerful forces. In 2008, she was arrested and jailed for two days for protesting forced abortion and human rights violations in China.

“I’ve always had a heart for the people of China and the persecution and the oppression that goes on and of course, specifically, the women that are forced to undergo abortions,” she told LifeSiteNews. Pregnant women “can be stopped on the street” and forced to show birthing permits.

“At the factories, their cycles are actually tracked so that they can monitor if they’re pregnant and then determine if they’re allowed to have another child—I mean, could you imagine that? Going to work and your cycle’s actually tracked?” asked Swindell. “It’s so oppressive, it’s so demeaning.”

Swindell, Mahoney, and one other activist “knew that the eyes of the world would be there because it was the Olympics,” so they obtained visas and were able to get in the country, where they carried out their plan of “solidarity.”

“We also thought how heartbreaking that there’s all this energy surrounding the Olympics—which, by the way, I love the Olympics, Pat loves the Olympics…but when you stop and think about it, China’s putting on this big performance pretending like everything is perfect,” Swindell explained. “Imagine if you were a political prisoner. Imagine if you were a woman who was forced to undergo an abortion. Imagine if you’re one of the families whose homes got taken so they could build this big Olympic venue and then you were compensated pennies for your home. And then you spoke out against it and you were thrown in jail until after the Olympics were over.”

“We thought, ‘let’s go be a voice for these people, so that they’re not forgotten,’” she said. “And that principle of standing in solidarity that we do in our pro-life work—let’s stand in solidarity with them. That was the heart behind it.”

The three activists lay roses in front of Mao Zedong’s tomb “as a public memorial for the victims of [the] Tiananmen Square massacre.” Immediately, plainclothes police officers and Communist officials came “out of the woodwork” and led them away. They were placed under house arrest.

The next day, the trio went back to Tiananmen Square and, to witness to the fundamental right to religious freedom, unfurled a banner that said “Jesus Christ is King” in Chinese and English.

“We were immediately arrested,” said Swindell. It was then that the activists were jailed and eventually deported from the country.

The inspiration for the banner came from a man named Cardinal Kung, Mahoney and Swindell told LifeSiteNews.

“He was brought before an arena of tens of thousands of people…they stood him up there to force him to denounce his faith,” said Swindell. “And it was expected that he would do so, that he would get up there and denounce his faith and that would get everybody else to say, ‘see look, this is what you have to do, this is how it’s going to be.’ So they marched him up there and he gets up there and he raises his hand and he shouts as loud as he could, ‘Jesus Christ is King!’ And he was sent to a re-education camp…for 30 years.”

“I’m more terrified looking back than when I was there,” Swindell laughed. “I’m like, ‘I can’t believe we went to China and got arrested!’”