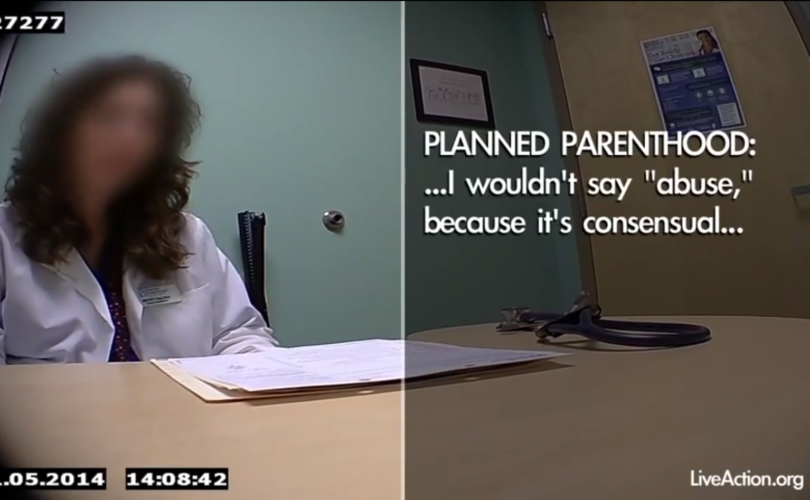 A fifth Planned Parenthood counselor has been caught on tape encouraging sadomasochism and bondage to an undercover investigator posing as an underage girl.

A fifth Planned Parenthood counselor has been caught on tape encouraging sadomasochism and bondage to an undercover investigator posing as an underage girl.

In a newly-released video from Live Action, a counselor in a Minnesota Planned Parenthood clinic is seen encouraging “sex toys,” “sex props,” and “harm and pain” as “normal” for minors engaging in sexual activities. According to the counselor, “as long as it's consensual,” any sexual activity is acceptable.

The video is the fourth in a series from Live Action showing Planned Parenthood employees encouraging a wide range of sexual activities that can cause harm.

In the newest video, the counselor also says that “rope burns” are just fine, “if it's consensual.”

The counselor was speaking to an undercover Live Action agent posing as a 15-year old girl.

“The new video lays bare Planned Parenthood's sexual ethos, even for kids,” said Live Action President Lila Rose. “Abusive, demeaning, and violent sexual behavior is 'normal' and 'OK' as long as the recipient believes that she's consented to it.”

Earlier this summer, counselors in Colorado and Indiana were caught on tape encouraging undercover Live Action agents to go to sex shops, describing personal sexual encounters in graphic terms, and engaging in other discussions that Rose said encourage “depraved and dangerous behavior.”

The Minnesota counselor was also asked about the book 50 Shades of Grey, a pornographic book series based upon the sadomasochistic relationship between a young woman and an older, domineering businessman. The counselor said that while some activities described in the books “border on…I wouldn't say 'abuse,' because it's consensual, but definitely extreme.”

In addition to receiving over $540 million for so-called “family planning,” which includes providing contraception, abortifacient, and abortion services, Planned Parenthood has also been given millions of dollars to help Americans sign up for the Affordable Care Act and to teach sexual education to teenagers and pre-teens.

Previous undercover Live Action videos have found that Planned Parenthood counselors will encourage underage, abused girls to have abortions, and not report either the abortions or the abuse to state officials. In all states, Planned Parenthood is required to report the sexual abuse of minors, and a number of states have parental notification laws for abortions.