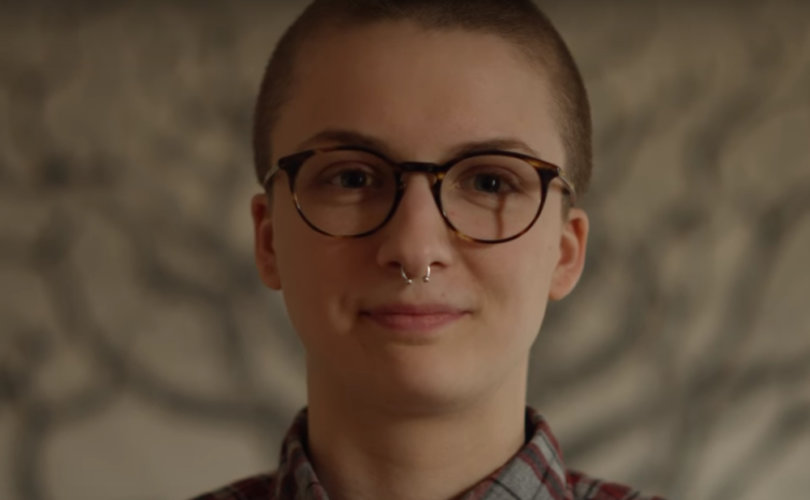 A young woman, “Vic,” who refuses to be identified as male or female, praises Planned Parenthood. “I heard about Planned Parenthood and I really wanted to give it a try because I feel like I was receiving very hetero-normative healthcare,” she explained.

Specifically, men who want to be or seek to appear to be women, and vice versa, experience serious health issues. The NLHEC lists those problems as including HIV infection, mental health, “suicidality and non-suicidal self-harm,” substance abuse, tobacco use, violence and victimization, “discrimination,” delay seeking healthcare, no health insurance, and a “lack of culturally competent care.”

The Planned Parenthood video does not say whether the abortion behemoth is distributing hormone replacement drugs or entering the sex change surgery industry.

The young woman in the Planned Parenthood promo describes her discovery of being genderqueer. “I was sitting on a bench with an ex … and we were talking about non-binary,” she states in the video. “You know, the idea that you don't feel like a man, you don't feel like a woman, but your gender is somewhere out there.”

“And I was like, Oh my G*d! Yep! There it is! Like, there it absolutely is,” she exclaimed.

She says when she went to Planned Parenthood, she felt accepted as a genderqueer. “It was, like, one of the first times I really understood that I deserved something,” she said. “I felt empowered, I felt in charge of my own healthcare, and I also felt like, where, this historic moment when ‘trans’ healthcare is really, it's happening.”