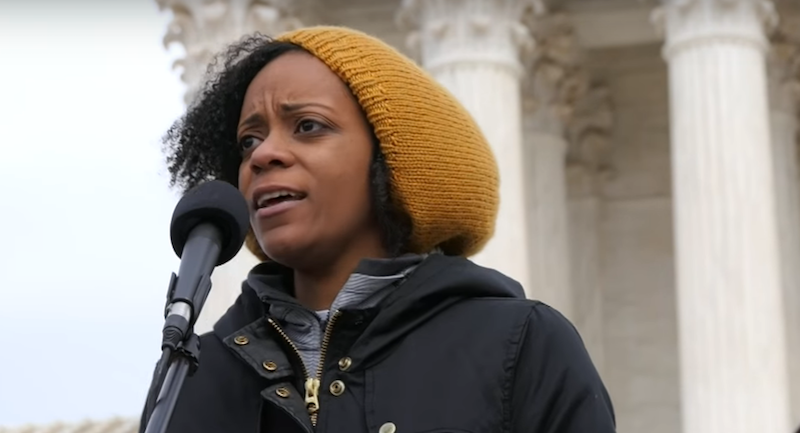 Christina Marie Bennett speaks outside the U.S. Supreme Court during the 2017 March for Life.Claire Chretien / LifeSiteNews

WASHINGTON, D.C., February 1, 2017 (LifeSiteNews) – We are at a “divine moment in history” when “God is raising up abolitionists” to fight abortion “just like in the times of slavery,” an African-American pro-life leader said at a rally during the 2017 March for Life.

Christina Marie Bennett shared the story of how she was almost aborted, but a janitor spoke with her mother and assured her God would give her the strength to have her baby. Because of this heroic janitor's words, Bennett is still alive and uses her powerful testimony to spread the pro-life message and expose how the abortion industry targets minorities.

“The doctor hadn’t even cleaned up the blood from the last abortion,” Bennett explained. “And [my mother] said, ‘I’m leaving.’ And he said, ‘no, you’ve already paid for this'…But my mother was, I believe, empowered by God. God gave her the strength and she said, ‘no.’ And she walked out of that hospital room and she walked down the stairs and she saved my life.”

Bennett told the enthusiastic crowd that she lived in Washington, D.C. for several years praying outside the Supreme Court to end abortion as part of the Bound4Life movement.

She encouraged the many students in attendance to be voices for the voiceless “no matter what society says, no matter what the media says.” Just as God raised up activists during the civil rights movement, He's now equipping pro-life activists “to end the bloodshed” of abortion, Bennett said. “Never quit! Never stop! It’s a civil rights issue! No other right matters unless we have the right to life!”