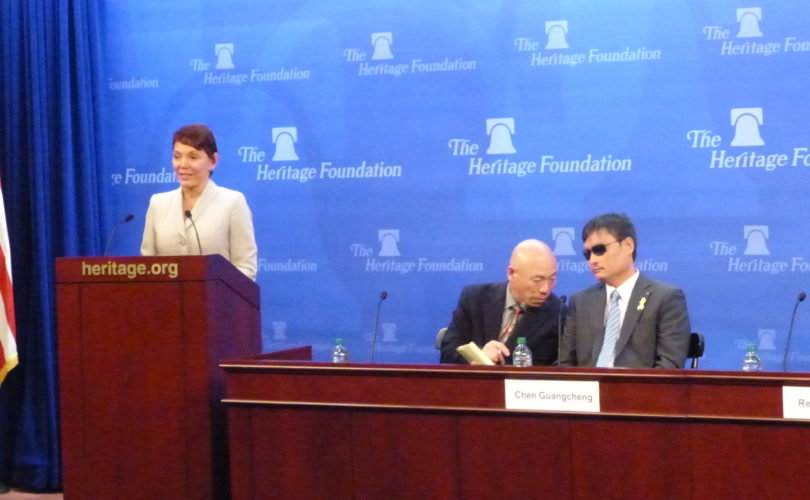 American citizens are responsible for the deaths of untold numbers of unborn girls in China – due to the way the Obama administration has used their tax dollars, a human rights activist and a U.S. Congressman said on Thursday.

Speaking at the Heritage Foundation next to acclaimed Chinese human rights leader Chen Guangcheng, Women's Rights Without Frontiers president Reggie Littlejohn said, “The West is, in some sense, complicit in” the one-child policy in China, which includes the forced abortions of girls.

According to Littlejohn, U.S. and other nations in the West are tied to the policy “through the financing of UNFPA [the United Nations Population Fund] and International Planned Parenthood, both of whom are working hand-in-hand with China's Communist Party in the implementation of this policy since its beginning.”

While Planned Parenthood Federation of America has said on multiple occasions that it “opposes coercive and inhumane reproductive policies and practices, including China’s one-child policy and the illegal practices of forced abortion and coerced birth control reported in some localities,” evidence exists to the contrary. Texas Right to Life has noted that the international umbrella of Planned Parenthood has accepted the membership of the China Family Planning Association since 1983, and LifeSiteNews has reported that the International Planned Parenthood Federation receives money from the UNFPA in addition to opposing the elimination of the UNFPA's budget — some of which funds the one-child policy.

And Littlejohn's organization has documented that a former Executive Vice President of Planned Parenthood wrote in 2011 that “the world is doomed to strangle among the coils of pitiless exponential growth” unless programs like China's one-child policy and the Obama administration's birth control policies are enacted as “a start.”

“They felt it would be a two-fer,” he continued. “[K]ill the girl child while she's in utero to get rid of one carbon breather. You kill her, she will also not be a mother when she's 20 or 25. Thereby, you mitigate the population so-called problem.”

“I am appalled…at the indifference. Where are the women's rights groups on this, other than Reggie and Right to Life, and some of these pro-life organizations,” asked Smith, who said that even pro-life groups “too have been AWOL.”